Official Washington likes to pretend that the neocon-driven Iraq War “surge” secured a “victory,” rather than face the evidence of a multi-faceted failure. But the news of an Iraqi arms deal with Moscow underscores the scope of the U.S. policy disaster, observes ex-CIA analyst Paul R. Pillar.

Back in the 1950s and 1960s, sales of munitions were a major instrument that the Soviet Union used, most conspicuously in the Middle East, to cultivate influence and close ties with other regimes. Such sales also had obvious benefits for the Soviet arms industry.

In addition to such clients as Egypt and Syria, Iraq became a major customer after a military coup in 1958 led by General Abdel Karim Kassem ended the Iraqi monarchy. Kassem lifted a ban on the Iraqi Communist Party, severed Iraq’s security ties with the West (which had included membership in the Baghdad Pact), and turned to the USSR as his principal security patron and arms supplier. 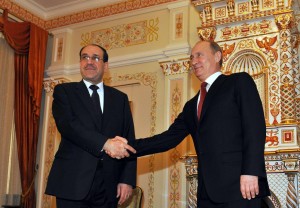 Kassem lost his power and his life when a Baathist coup overthrew him in 1963. The United States had good information about the coup plot and evidently smiled on it, out of concern over growing communist influence under Kassem.

Several years of instability and short-lived regimes in Iraq followed until the Baath Party regained control and Saddam Hussein emerged from it to establish his dictatorship. The Soviets sold plenty more arms to Iraq under the Baathists, regardless of what U.S. officials may have hoped for in 1958.

Moscow’s arms market in Iraq was disrupted when the U.S. invasion overthrew Saddam. But now the current Iraqi government of Nuri al-Maliki has concluded a contract to buy Russian arms worth more than $4.2 billion, according to a joint statement issued after negotiations between Maliki and Russian Prime Minister Dmitri Medvedev. The deal features attack helicopters and surface-to-air missile systems.

Further discussions under way between Russia and Iraq aim at additional arms sales that would include MiG-29 fighters, more helicopters and other heavy weaponry. The Russians of today, like the Soviets of yesteryear, do not seem to have any of the compunctions, which sometimes figure into American deliberations about arms exports, including to Iraq, about the recipient’s human-rights record or other political conditions in the recipient country. It is not out of the question for Russia to replace the United States in the foreseeable future as Iraq’s largest arms supplier.

We can draw several implications from this news. One is that it fills in further the picture of what legacy was left in Iraq by the U.S. war that ousted Saddam. The regime that emerged from the rubble is not only increasingly authoritarian and narrowly sectarian and not only chummy with Iran; it also is becoming a client of Moscow. A trifecta of failure.

A second lesson concerns the notion that committing military support to a new regime in the making is essential for having a good relationship with it and to be considered a friend rather than an adversary once such a regime comes to power. This idea is being heard increasingly as an argument for doing more to assist rebels in Syria.

We need to get in on the ground floor with the new bunch and accept risks and commit major resources, it is said, in order to be held in favor by whatever regime emerges from that rubble. But the United States got in on the ground floor more than once in Iraq, with the Baathists in 1958 and with the successors to Saddam after he was overthrown. In the latter case it did so with the expenditure of enormous resources. And look how much friendship and influence it bought.

Finally, the fact that Iraq’s latest turn is reminiscent of what happened in the late 1950s suggests that the arrow of time in the Middle East does not point as much in one direction as many like to think it does. The progression of events there, even with pushes or leadership by the United States, does not necessarily run in the direction of more political freedom, more free enterprise, or whatever.

Maybe in thinking about this we can get help not from the monotheistic religions of the Middle East but instead from religions of South Asia, the ones that envision a wheel of life on which we keep going round and round. Buddhists would say it is possible in a sense to get off the wheel, but only through self-enlightenment and not through a push from someone else.

This is what Thomas Friedman seems to be saying in his column on Wednesday when he writes, “the Middle East only puts a smile on your face when change starts with them [i.e., Middle Easterners], not us.”

Think about that the next time someone talks about how the Middle East would be more to our liking if the United States would only be more assertive there.