Mitt Romney tried to burnish his foreign policy credentials with a speech lambasting pretty much everything President Obama has done. But the rhetoric may be less important than the neocons around Romney who hope to reclaim control of U.S. global affairs, says ex-CIA analyst Paul R. Pillar.

Many realities of foreign policy do not lend themselves to clear, coherent positions in an election campaign. The reasons for this go beyond the fact that in most election years far more votes are to be won or lost on domestic issues than foreign ones, even during better economic times than we have now.

One of the reasons is the reactive nature of much of foreign policy, in which presidents are forced to spend more of their attention dealing with problems the world throws at them than on imposing their own program on the world, however much they may have hoped to do such imposing when coming into office. 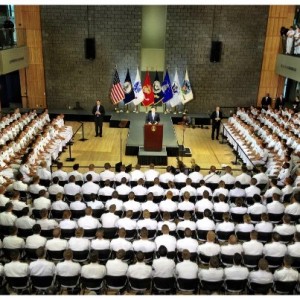 Even when a foreign-policy issue does figure significantly in an election campaign (Wilson kept us out of war in Europe; Eisenhower will get us out of war in Korea), it is usually a matter of dealing with a problem the world threw at the United States, such as a war someone else started.

It is often said that presidents have more autonomy in foreign than in domestic affairs, and that is true in the sense of having fewer energized domestic political forces to contend with. But having to deal with the problems of a big, unruly world that is even more outside the ability of a U.S. president to shape than are affairs inside U.S. borders means that despite that relative autonomy, there are no greater opportunities to impose an agenda or program in foreign affairs than in domestic ones.

The exceptional major cases of imposing such an agenda, either a successful one (Nixon’s triangular great-power diplomacy) or an unsuccessful one (the Iraq War) still did not figure into getting the relevant presidents elected. The possibility of launching a war in Iraq had no role in the 2000 campaign; the nuances of the diplomatic strategy Nixon brought into office were too sophisticated to influence many voters in 1968.

Appeals to candidates to sound more strategic and to lay out a foreign-policy strategy are common. But even for the foreign-policy intelligentsia, it may be difficult to distinguish in practice between policy that would be the product of sound strategy and policy that would be the result of what is simply good, skillful, pragmatic handling of the succession of unavoidable problems the world throws at us.

And when what purports to be strategy gets formulated in the lexicon of political campaigns, the line between strategy and sloganeering can get very thin. Most of the tradeoffs and complexities that need to be addressed by a good foreign policy are beyond the comprehension or at least the cognizance of the great majority of voters. There are tradeoffs and complexities in domestic policy too, of course, but more of them are ones (e.g., more spending on Medicare means more strain on the federal finances) that much of the electorate can relate to.

We see some of these realities playing out in the fight for Mitt Romney’s foreign-policy ear, with some of the most ardent fighters being on the largely neocon Right. Danielle Pletka of the American Enterprise Institute, in a piece titled “Romney’s Missing Foreign Policy,” lays into the Republican nominee pretty strongly with the “we need a strategy” theme.

Pletka says, “Mr. Romney needs to persuade people that he’s not simply a George W. Bush retread, eager to go to war in Syria and Iran and answer all the mail with an F-16.” She correctly notes, “Criticisms of Mr. Obama’s national security policies have degenerated into a set of clichÃ©s about apologies, Israel, Iran and military spending.” What Romney must do, shes says is to “put flesh on the bones of his calls for a renewed American greatness.”

Setting aside whether Pletka’s own recommendations ever really get beyond sloganeering and offer any meat, the speech that Romney delivered on Columbus Day at the Virginia Military Institute should have left any meat eaters hungry. Romney talks about strategy, too, and perhaps the most laudable line in the speech is that the use of drones is “no substitute for a national security strategy in the Middle East.” Quite so.

But the most one can extract from the speech about Romney’s own strategy is that if one proclaims often enough and loudly enough that America is great, that it is exceptional, that it is a leader and that others in the world want our leadership, somehow those bedeviling problems in the Middle East and elsewhere will get solved.

Much of what the candidate said runs up against that reality of how a U.S. president, even if he enjoys autonomy from domestic political constraints, cannot snap his fingers and thereby make things happen overseas. A major element of Romney’s “strategy” seems to be the belief that simply by expressing a desire or objective firmly enough, it will be attained, never mind whatever obstacles have kept it from being attained and what U.S. interests may be at stake with those obstacles.

This was the case with what he said, for example, about free-trade agreements and also with his criticism of the president for an “abrupt withdrawal” of U.S. troops from Iraq without mentioning that the hang-up in extending the withdrawal deadline that the Bush administration negotiated (even if such an extension would have done anyone any good) concerned the need to guarantee immunity for U.S. personnel from prosecution in Iraqi courts.

One can be confident that if the Obama administration had extended the troop presence without such a guarantee and even a single U.S. soldier had wound up in an Iraqi court, this would have been a major point of attack in Romney’s speech.

The most prominent feature of the speech is that on most issues, including Afghanistan, Syria and sanctions on Iran, Romney’s words were mostly a description of current policy. There is nothing wrong with that. It is a tacit recognition of the reality about the United States having only a limited range of action without endangering its own interests.

To the extent one tries to extrapolate any differences from current policy, such as inferring the consequences of maintaining no “daylight” between the United States and the prime minister of Israel, as Romney says he intends to do, then the consequences really would endanger U.S. interests.

To the extent Romney’s refraining from spelling out the implied policies suggests not duplicity but instead the prospect that if elected he would not actually adopt such policies, then good for him. Let Danielle Pletka and other meat-eating critics remain unsatisfied.

To be sure, there is plenty in this speech that the candidate should not be allowed to get away with. Perhaps most fundamental is the whole notion that upheaval and instability in the Middle East is the fault of the president of the United States.

The assertion that “the risk of conflict in the region is higher now than when the president took office” is a strange campaign point, given that President Obama ended U.S. involvement in the one war in the Middle East in which it was still fighting and given that the person most likely to start a new war in the region damaging to U.S. interests is Romney’s friend and backer, the “no-daylight” Israeli prime minister.

The candidate’s reference to “President Obama’s deep and arbitrary cuts to our national defense” ignores the fact that the only such deep and arbitrary cuts in store are those in the sequestration agreement, which was part of a bipartisan way of trying to overcome the impasse created when Congressional members of Romney’s party attempted extortion by threatening to make the nation default on its debt.

And Governor Romney really needs to get past trying to exploit the deaths of U.S. officials in Libya in suggesting that the natural development of the analysis and investigation of the incident was instead some kind of withholding of an honest explanation by the Obama administration. This exploitation is especially rich given that Romney’s own initial statement on the subject was a falsehood that described as the administration’s “initial response” to the lethal incident an embassy statement that was released before the incident had even occurred.

But as for the lack of a meat-on-the-bones strategy that distinguishes Mr. Romney from his opponent, let us go easy on Romney. That lack is not a failing of the candidate so much as it reflects an immutable reality of foreign policy.

This election will make a difference in foreign policy but not primarily in ways that are clearly discernible in this speech. We ought to pay more attention to those who will have Romney’s ear not just now but if he were the president. Conspicuous among them are the neocons who never seem to go away.

5 comments for “The Neocons’ Waiting Game”