Despite doubts from many quarters, President Obama appears to have backed down Israeli Prime Minister Netanyahu from his demands for an explicit American “red line” to attack Iran’s nuclear program and from Netanyahu’s own suggestions of a unilateral Israeli bombing strike, writes Gareth Porter.

The rest of the world can stop worrying about Israeli Prime Minister Binyamin Netanyahu’s supposed threat to bomb Iran. Netanyahu’s speech at the United Nations General Assembly last week appears to mark the end of his long campaign to convince the world that he might launch a unilateral strike on Iran’s nuclear program.

The reason for Netanyahu’s retreat is the unexpectedly strong pushback against Netanyahu’s antics by President Barack Obama. And that could be the best news on the Iran nuclear issue in many years. 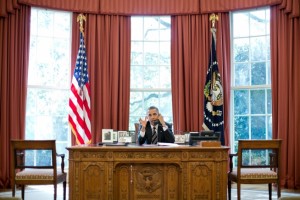 Commentary on Netanyahu’s speech predictably focused on his cartoon bomb and hand-drawn “red line,” but it’s real significance lay in the absence of the usual suggestion that a unilateral strike against Iran might be necessary if the Iranian nuclear program is not halted.

Although he offered yet another alarmist portrayal of Iran poised to move by next summer to the “final stage” of uranium enrichment, nowhere in the speech did Netanyahu even hint at such a threat. His explicit aim was to get the U.S. to adopt his “red line” – meaning that it would threaten military force against Iran if it does not bow to a demand to cease enrichment.

Journalist Jeffrey Goldberg, whom Netanyahu had twice used to convey to the U.S. his purported readiness to go to war with Iran, called it a “concession speech.” Netanyahu conceded, in effect, that his effort to force the U.S. to accept his red line had failed completely.

Although Netanyahu has been generally perceived as deadly serious about the threat of war against Iran, there is good reason to doubt that Netanyahu and Israeli Defense Minister Ehud Barak ever intended to attack Iran. A review of the record of statements by Netanyahu and Barak on Iran reveals that both of them have carefully avoided issuing an actual threat to attack Iran under any circumstances.

In fact, Netanyahu has been distinctly more cautious in that regard than his predecessor, Ehud Olmert, whose government twice issued actual military threats against Iran – in February 2006 and again in June 2008. A former Israeli official who requested anonymity confirmed to me last spring that people who had worked under Netanyahu as well as under Olmert and Ariel Sharon had found Netanyahu “less decisive” on Iran than either of those former prime ministers.

Despite Olmert’s much more explicit threats of attack on Iran, we now know from U.S. diplomatic cables released by WikiLeaks to Haaretz newspaper that on Dec. 2, 2005, American diplomats had reported that their conversations with Israeli officials indicated that there is no chance of a military attack being carried out on Iran.

Even more telling, before his retirement as IDF Chief of General Staff in February 2011, General Gabi Ashkenazi told then Chairman of the Joint Chiefs of Staff Admiral Mike Mullen that all the talk about the Israeli military option against Iran by Netanyahu and Barak was “empty words”, because “Israel has no military option,” according to a report by Shimon Shiffer of Yedioth Ahronoth.

The evidence now available indicates that the Netanyahu campaign about a unilateral strike on Iran was from the beginning a bluff aimed at pressuring President Barack Obama to adopt both “crippling sanctions” against Iran’s oil export sector and an explicit threat of war if Iran did not end its nuclear program.

Netanyahu had successfully manipulated the Clinton administration on the Oslo “peace process,” and in 2001, unaware he was being recorded, he said, “America is a thing you can move very easily, move it in the right direction. They won’t get in the way.” He evidently calculated in late 2011 that his pressure on Obama would be amplified by a majority of the U.S. Congress, which the powerful pro-Israel lobby AIPAC had repeatedly mobilized in support of legislation desired.

Obama’s vulnerability to such pressures would be at its maximum during the Presidential election campaign season of 2012, according to Netanyahu’s calculation. It was no accident that Defense Minister Ehud Barak suggested in an interview with CNN last November that Israel would be forced to make a decision on war either during the summer or fall of 2012.

There was no objective, technical reason but an obvious political logic for suggesting such timing. The Republican Party’s candidate could be expected to be heavily dependent on Sheldon Adelson, the same big funder who had bankrolled Netanyahu’s own campaign.

During late 2011 and the first half of 2012, the Obama administration was ostensibly alarmed by what was widely viewed as a Netanyahu threat of unilateral action. When the U.S. and Israel agreed in mid-January to postpone a joint military exercise originally scheduled for early spring, U.S. defense officials and former officials lined up to tell Yahoo news reporter Laura Rozen and Jeffrey Goldberg of the Atlantic off the record that they feared Israel was planning an attack during that period.

And in early February, Washington Post columnist David Ignatius reported that Secretary of Defense Leon Panetta was alarmed about a possible Israeli attack between April and June.

But there was more to those apparent expressions of alarm than met the eye. Panetta was making the threat of an Israeli attack during those months seem more credible than it really was, and he was doing so without any pushback against it.

Those were tell-tale indications that the Obama administration was  using the supposed threat of a unilateral Israeli attack to increase the pressure on Iran in advance of the negotiations between Iran and the “P5+1” scheduled for the spring.

As the Republican Party prepared to nominate Netanyahu’s old friend Mitt Romney as its presidential candidate, all the pieces seemed to be in place for Netanyahu to maximize the impact of his Iran war bluff. Two weeks before the convention, Netanyahu and Barak telegraphed their intention to convert their campaign into decisive influence over U.S. Iran policy.

In an interview with Ynet news on Aug. 11, an unnamed “senior official in Jerusalem” offered an explicit deal with the Obama administration: Netanyahu would “reconsider” Israel’s unilateral attack option if Obama would adopt Israel’s red line – meaning that he would threaten to attack Iran if it had not agreed to stop its enrichment by a date certain.

US resistance to ‘pressure tactic’

But Netanyahu met unexpectedly firm U.S. resistance to his pressure tactic. On Aug. 30, General Martin Dempsey, Chairman of the Joint Chiefs of Staff, talking with reporters in the UK, said an Israeli strike on Iran would be ineffective, and then dropped an unexpected bomb. “I don’t want to be complicit it they [the Israelis] choose to do it,” Dempsey said.

That Dempsey comment was the first public rebuke to Netanyahu and Barak, and former Israeli national security adviser Giora Eiland was emphatic about its impact on Netanyahu’s strategy.

“Israeli officials cannot do anything in the face of a very explicit ‘no’ from the U.S. president,” he said. Netanyahu had been arguing all year that the US “might not like” an Israeli attack, but that it would “accept it the day after.” But after such a “public, bold statement” by Dempsey, Eiland said, “the situation had to be reassessed”. Netanyahu and Barak were now “exploring what space is left to operate”.

That space had shrunk even further, moreover, because the Republican convention in Tampa Bay from Aug. 27 to 30 failed to make an American ultimatum to Iran, as demanded by Netanyahu, a central theme of the convention. The only major foreign policy figure to speak at the convention was Condoleezza Rice, who had been reviled by the neoconservative allies of Israel for favoring diplomatic engagement with Iran.

Obama and other senior U.S. officials had clearly decided it was time to cut off Netanyahu’s ham-handed effort at pressure on U.S. policy at the knees. In an interview with Bloomberg Radio on Sept. 9 Secretary of State Hillary Clinton declared, “We’re not setting deadlines.”

And when Netanyahu pushed Obama in a phone conversation on Sept. 11 to adopt his “red line” – a threat to attack Iran if it refused to comply with demands by the P5+1 – Obama flatly rejected the demand, according to American sources. Three days later, Panetta told Foreign Policy magazine, “Red lines are kind of political arguments that are used to put people in a corner.”

Asked by CBS “60 Minutes” on Sept. 24 whether he felt any pressure from Netanyahu’s efforts to change U.S. policy toward Iran, Obama replied that the only pressure he felt was to “do what is right for the American people,” then added, “And I am going to block out any noise that’s out there”.

And in an unmistakable signal by Obama that Netanyahu should end his meddling in U.S. politics and policy, the White House even rebuffed a Netanyahu request for a meeting during his upcoming U.S. trip, as the Israelis leaked to the news media.

Haaretz editor Aluf Benn has suggested that Netanyahu’s UN speech reflected not only the Obama administration’s rebuff but the realities of Israeli public opinion. He wrote that the Prime Minister had tailored his speech to polls showing that Israelis wanted the U.S. to handle the problem of Iran, not Israel. Benn summarized the public’s verdict: “Not now and not alone.”

Netanyahu will no doubt campaign for re-election at home by demonizing Iran as an “existential threat” and will continue to say that “all options are on the table”. But his effort to convince the world that he is seriously contemplating an attack on Iran has run its course.

Netanyahu badly miscalculated his leverage over U.S. policy, and with Obama now widening his lead in some polls, the extraordinary series of events in September may indicate how U.S.-Israeli relations on Iran will develop in 2013 and beyond.

An Obama who is no longer intimidated by Netanyahu or the Israeli lobby might finally be willing to make a serious effort to find a diplomatic solution to the conflict over Iran’s nuclear program for the first time. Netanyahu’s failure could provide the first real break in the long chain of actions and reactions that has led to the present contest of wills with Iran.

Gareth Porter is an independent investigative journalist and historian specializing in US national security policy and winner of the 2012 Gellhorn Prize for journalism. [This article appeared first as a commentary at Al-Jazeera.]

← Mitt Romney as Eddie Haskell
The Backlash against Women’s Rights →

8 comments for “Obama Backs Down Netanyahu”