The last decade’s surge in military spending has added to America’s debt while having a dubious impact on U.S. security. The upcoming elections now pit President Obama, who is calling for reductions, against Mitt Romney, who is calling for more increases, writes ex-CIA analyst Melvin A. Goodman.

Over the past decade, the United States has engaged in the most significant increase in defense spending since the Korean War.

Trillions of dollars have been allocated for the Pentagon, with little congressional monitoring or internal oversight. The defense budget for 2012 exceeds $600 billion, nearly equaling the combined defense spending of the rest of world. 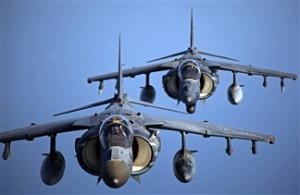 Every U.S. taxpayer spends twice as much for the cost of national defense as each British citizen; five times as much as each German; and six times as much as each Japanese. Recent U.S. military expenditures include more than $2.5 trillion to wage unwinnable wars in Iraq and Afghanistan that have failed to enhance American security.

The current economic crisis and tepid economic recovery during President Barack Obama’s first term have created the imperative to reduce defense spending and the size of the U.S. military.

More than 46 million Americans live in poverty; unemployment rates have remained at unacceptably high levels; and the economic concerns of the middle class have not abated.

The income gap between the wealthiest Americans and the rest of the country continues to grow sharply. Millions of American have learned that their primary assets, their homes, have become a liability.

President Dwight Eisenhower warned that military demands for U.S. defense spending would become a “cross of iron” that would limit spending on domestic needs. It is time to act on that warning by making significant cuts in defense spending and applying the savings to health care, education, infrastructure and the environment.

The Budget Control Act of 2010 was a good first step, mandating cuts in defense spending of $485 billion over the next 10 years and allowing reductions in the size of the Army and the Marines that would still leave ground forces larger than pre-Sept. 11 levels.

Excessive spending on the Air Force, which faces no challenge, is the most wasteful of all military expenditures. We could save $15 billion to $20 billion annually by reducing the F-35 fighter fleet to 1,000, far more than is needed for any conceivable threat. The cost of each F-35 has nearly doubled over the past 10 years, making it the Pentagon’s most expensive program.

As the Air Force is dominant in the skies, the Navy has, in the words of Chief of Naval Operations Adm. Gary Roughhead, a “degree of overmatch [with any adversary] that is extraordinary.” Reducing the number of ships in the U.S. Navy would save $60 billion over 10 years. The commitment to sustain 11 aircraft carrier battle groups is particularly questionable.

Meanwhile, the Marines have not conducted an amphibious landing since the Korean War but remain committed to the V-22 Osprey, a problematic vertical takeoff and landing aircraft, as well as a new landing vehicle, the Expeditionary Fighting Vehicle.

Fewer intercontinental ballistic missiles could save $80 billion over the next 10 years, and eliminating nuclear weapons from our strategic bombers would bring additional savings of $40 billion.

President Barack Obama has stated his commitment to a smaller military and less defense spending, although his position on reducing specific weapons systems has not been clarified.

Mitt Romney, however, is committed to greater investment in a bloated military that has been given a virtual blank check for the past decade. His program would make a bad situation worse.

Mr. Romney is opposed to the bipartisan agreement to cut defense spending over the next 10 years, known as “sequestration.” On the contrary, he favors increased spending on defense that would amount to nearly $1 trillion over a decade. Mr. Romney has pledged to spend at least 4 percent of gross domestic product on defense, a bizarre way to plan for national defense.

His strident statements on foreign policy interests that involve Russia, China, Iran and the Middle East suggest that he would pursue aggressive policies that could lead to greater military deployments overseas.

Mr. Romney also wants to increase naval shipbuilding to 15 vessels a year, while Mr. Obama favors limiting shipbuilding to the current pace of nine ships a year. Mr. Romney even favors reopening the production line for the F-22 fighter plane, which has already cost the United States nearly $80 billion. His plan would cost an additional $120 billion over the next 10 years.

Former Secretary of Defense Robert M. Gates argued that a “smaller military will be able to go to fewer places and do fewer things,” one of the best arguments for reduced defense spending.

An equally strong argument is that, by reorienting government spending away from the military and toward our domestic problems, we can strengthen the security of our nation.

Melvin A. Goodman is a former CIA analyst and the author of the forthcoming “National Insecurity: The Cost of American Militarism” (City Lights Publishing, January 2013). His email is goody789@verizon.net. [This article first appeared at the Baltimore Sun. It’s published here with the author’s approval.]

8 comments for “The Burden of Pentagon Spending”