Israeli Prime Minister Netanyahu’s gimmick of hoisting a crude drawing of a bomb to illustrate the alleged Iranian nuclear threat has prompted derision and has distracted from his claims about existential threats. But perhaps he was more interested in another kind of distraction, says ex-CIA analyst Paul R. Pillar.

One naturally wonders what was going through the mind of the Israeli prime minister, or of his staff or speechwriters, when deciding to include in his address to the United Nations General Assembly such an obvious invitation for satire and ridicule. And on a deadly serious topic, which Mr. Netanyahu more than anyone has repeatedly proclaimed we ought to view in deadly serious terms.

I am referring, of course, to the drawing of a cartoon bomb that he used as a prop and on which he drew a red line with a marker while talking about imposing red lines on Iran’s nuclear program. A major topic of post-speech analysis has concerned which cartoons were possible sources of the bomb design. 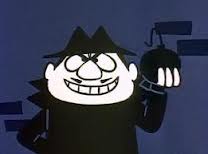 Boris Badenov, the villain in the "Rocky and Bullwinkle" cartoon show, brandishing a bomb similar to the drawing displayed by Israeli Prime Minister Benjamin Netanyahu at the U.N. General Assembly.

Was it something Wile E. Coyote had used against Road Runner, or did it, and more evidence leans in this direction, come from Boris and Natasha on the old Rocky and Bullwinkle show? There are many satiric directions one could go with Netanyahu’s prop, and Photoshop-adept wags in Israel wasted no time in having fun with some of them.

Sometimes dumbing a topic down, even to the level of cartoons, has the advantage of getting a single point across clearly even at the expense of distorting or oversimplifying the rest of the topic. But if the point concerned where Netanyahu wanted to establish a red line for Iran’s nuclear program, he failed to clarify this and instead only confused.

The line he drew on his cartoon bomb indicated that what would be unacceptable would be any enrichment of uranium to the 90 percent (i.e., weapons-grade) level. If that is the line, there is no problem and no issue. Iran is doing no enrichment to that level and has given no indication of moving to that level. If it were to begin to make such a move, this would immediately be observed by the on-site inspectors from the International Atomic Energy Agency.

In his remarks, however, Netanyahu said Iran should not be permitted to “complete” medium-level (20 percent) enrichment. That is not only at odds with his graphic but also intrinsically unclear. What does “complete” mean, especially given that, this is something the prime minister never mentioned, more than half of the 20 percent-enriched uranium Iran has produced is being made into fuel plates for nuclear reactors and as such is no longer available for possible further enrichment to weapons grade?

All of this is, however, beside the point. We collectively give Netanyahu far too much credit for believing what he is saying and for being focused on technical details that he claims to be focused on.

His case for the Iranian nuclear program being some kind of grave, imminent threat does not stand up, and he is smart enough to realize it does not stand up. Thus he loses nothing through confusion, contradiction and silly graphics.

What Netanyahu claimed about red lines and a threat of military attack being able to deter Iran from continuing its current nuclear program contradicts, as Tony Karon points out, the assertions about the supposed inability to deter Iran if it had a nuclear weapon, which is the main basis for all the alarmism in the first place about a nuclear-armed Iran.

This parallels the similar contradiction involved when those promoting the use of military force against Iran argue, as they often do, that Iran would be deterred from striking back forcefully.

As for the supposed horrors that would ensue if Iran did acquire a nuclear weapon, what Netanyahu had to say about that in his U.N. speech, such as suggesting that continued Iranian enrichment of uranium would somehow mean Al Qaeda having a nuclear weapon, was just as cartoonish as what he said about red lines, even if he did not have a graphic to go with it.

The use of even a satire-inducing prop becomes a little less puzzling if we do not take what Netanyahu is saying at face value but instead realize what he is trying to do, which is not to establish some technical case about timelines of the Iranian nuclear program. He is, for one thing, succeeding in getting our attention.

The above-the-fold portions of the front pages of Friday’s New York Times and Washington Post were dominated by a picture of Netanyahu holding up his cartoon bomb drawing.

If the Israeli prime minister looks somewhat looney by using something that could have come out of Looney Tunes, that only adds to building the image of himself as someone who might actually be crazy enough to start a war with Iran. His principal audience in this regard is not in Iran but instead in the United States.

The threat of dragging the United States into such a folly of a war serves in the first instance to increase the pressure for sanctions, subversion, and other dimensions of conflict with Iran short of overt military force. It also serves to box the U.S. president into a position in which if overt war comes, it is more likely to involve the United States and not just Israel.

Netanyahu’s agitation and saber-rattling, and the effects they have on U.S. policies, also help to subvert prospects for success in negotiations with Iran on the nuclear issue. They help, moreover, to prevent any broader U.S.-Iranian rapprochement, thus supporting the Israeli line that Israel is the only partner the United States can hope to have within a region full of threats and enemies.

All the agitation on Iran has diverted attention from topics that Netanyahu does not want to receive attention, which include above all the festering conflict between Israel and the Palestinians. A measure of how well this diversion of attention has succeeded is how little notice the Palestinian situation has received in reporting in the United States of the speeches at the General Assembly.

That includes coverage of the speech by Egyptian president Mohamed Morsi, who devoted much of his address to that topic and reminded his listeners that the Egyptian-Israeli peace agreement was only one-half of the Camp David accords, with promised progress on the Palestinian issue being the other.

Speaking of diversion of attention, note also how, in contrast to Netanyahu’s cartoon-aided presentation, relatively little comment has been given to the speech at the same podium the previous day by Iranian president Mahmoud Admadinejad.

Most comments just noted how rambling and ultimately boring Ahmadinejad’s speech was. The only things he said about Israel were to complain (and what Iranian president couldn’t or wouldn’t complain about this?) about all the Israeli threats and hostility directed against Iran.

There was no reference to map-wiping or any of the other rhetoric that has repeatedly been seized upon by those talking up an Iranian nuclear threat. It is interesting how when such snippets of rhetoric appear they are vigorously extrapolated into conclusions about future Iranian policy, but when they do not appear the absence is simply ignored.

15 comments for “Method to Netanyahu’s Wackiness?”