Exclusive: Election 2012 is a choice between two visions for America’s future and also a contest between two versions of the U.S. past. Mitt Romney and the Tea Party draw from a national narrative that claims the Framers opposed a strong central government, while President Obama sees the opposite, writes Robert Parry.

Mitt Romney is famous for answers so disconnected from what normal people say that some observers joke that he must be from another planet. He lands in Michigan and declares “the trees are the right height.” He goes on a TV show and says he “wears as little as possible” to bed, which would suggest nudity or some moral clash with his Mormon faith.

And when the Republican presidential nominee is asked on CBS’ “60 Minutes” about the specifics of his tax plan, he demurs with the response: “The devil’s in the details. The angel is in the policy, which is creating more jobs.” A reasonable reaction to such an answer might be, “What the hell is that supposed to mean?” 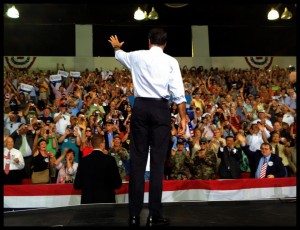 Yet, the Romney campaign has bristled when analysts and critics have stepped in to fill the void on Romney’s vacuous tax strategy by making their own assumptions about what it would take to enact his 20 percent cut in income tax rates while not raising the deficit, as Romney has claimed he would do. Romney’s fuzziness has left little choice but to speculate how he might handle the math.

One of those logical assumptions is that Romney would have to eliminate or sharply curtail the mortgage-interest deduction which amounts to a tax break for homeownership. If the deduction were removed or phased out, the immediate impact would be a decline in home prices, which would push even more Americans underwater on their home equity. That would deliver another body blow to the U.S. economy.

So, rather than an “angel” of a policy “creating more jobs,” the reality is that slashing the mortgage-interest deduction would further reduce the spendable income of many middle-class American homeowners, which would mean they could buy fewer goods and services, which, in turn, would mean more layoffs and fewer jobs.

Plus, more foreclosures and short sales would discourage new homebuilding and threaten millions of jobs associated with that industry. Not to mention that there are independent studies that conclude that Romney’s 20 percent tax cut would so reduce tax payments from the rich that his only alternative would be raise taxes on the middle class through elimination of more tax deductions.

However, on “60 Minutes,” rather than pursue Romney with aggressive follow-ups on his tax plan, CBS correspondent Scott Pelley teed up a softball for the Republican presidential nominee, noting, “Presidencies are remembered for big ideas, emancipation, Social Security, man on the moon. What’s your big idea?”

Romney’s response was just as vague as his angelic tax plan: “Freedom. I want to restore the kind of freedom that has always driven America’s economy. And that’s allowed us to be the shining city on the hill.”

Again, Romney offered no details, but he did touch on what may be the defining issue not only for this campaign but for America’s future. How do you define “freedom”?

For Romney, freedom appears to be freeing up corporations which (or who) “are people, my friend,” according to another Romneyism and letting them to do pretty much whatever they want to those flesh-and-blood people.

In other words, despite Romney’s stylistic differences from the Tea Partiers, he the uptight princeling from Mormon royalty and they the followers of Sarah Palin and Rush Limbaugh are more in agreement than many pundits might think. They both equate “freedom” as freedom from the federal government, although they come at the issue from different directions.

Romney’s grievances against federal authority may reflect his Mormon heritage, including his grandfather’s flight to Mexico in the 1800s amid a federal crackdown on Mormon polygamy and against the church’s theocratic rule in the Utah territory. Romney also absorbed the cultural resentment that freewheeling “venture capitalists” typically feel toward securities regulators and other obstacles to extracting big profits.

For the Right’s Tea Party base, however, the anger toward the “tyrannical” federal government derives, in part, from a different source, their false narrative describing the nation’s founding. Tea Partiers put on tri-corner hats, dress up in Revolutionary War costumes and wave “Don’t Tread on Me” flags because they have been sold a bogus storyline about how and why the Framers wrote the Constitution.

Over the past several decades, one front in the Right’s “war of ideas” has been to transform the Framers into anti-government ideologues who saw the Constitution as a device for constraining the authority of the central government, while ceding broad powers to the states and creating a “you’re-on-your-own” economy.

In reality, nearly the opposite was true. The Constitution’s Framers engineered the most significant transfer of power from the states to the central government in U.S. history. They also wanted the federal government to be an engine for national progress, and they had little regard for states’ rights.

On a personal level, key Framers, including James Madison and George Washington, despised the idea of state “sovereignty” and “independence.” As commander in chief of the Continental Army, Washington had confronted the national disorganization resulting from 13 squabbling states under the Articles of Confederation. The chaos continued into the post-war era with economic stagnation and commercial challenges from Europe.

So, with Washington’s staunch support, Madison plotted the destruction of the states’ rights-oriented Articles of Confederation and its replacement by the federal-government-is-supreme Constitution. That was the whole idea of the Constitutional Convention held in secret in Philadelphia in 1787.

However, in recent years, the Right’s “scholars” recognizing the allure of a national mythology whether true or false have labored to revise the history. Their makeover of Madison has been particularly striking.

By cherry-picking and taking out of context some of his comments in the Federalist Papers and by exaggerating his sop to the Anti-Federalists in the Tenth Amendment, the Right turned Madison into his opposite, a hater of a strong central government and a lover of states’ rights. [For details on how this history was distorted, see Consortiumnews.com’s “The Right’s Inside-Out Constitution.”]

Next, the likes of Glenn Beck popularized this false founding narrative, giving important impetus to the Tea Party. Millions of Americans associated themselves with a movement that they thought was defending the Framers’ vision of a weak central government, powerful states and little or no federal role outside the maintenance of a huge standing army.

In effect, today’s Right merged Ayn Rand theories of unbridled selfishness with the quasi-religion of magical markets and placed it all under the umbrella of a founding national narrative that equates states’ rights and the rights of corporations as the essence of American “liberty.”

In an imperfect way that is what Election 2012 is about, which narrative will dominate the future. President Barack Obama, who was a constitutional law professor, sees the Constitution in the context of the pragmatism that was at the core of what the Framers were trying to achieve, that is, a governing structure for addressing the needs of a diverse and growing nation.

During the last century, the trust-busting policies of Theodore Roosevelt, Franklin Roosevelt’s New Deal and later reforms like Medicare and civil rights legislation drew on those traditions by using federal authority to solve problems impinging on the nation’s “general welfare.”

Obama has tried to follow that path, albeit with a fair share of stumbles, by pushing through the Affordable Care Act, the economic stimulus bill, the auto bailout and new Wall Street regulations. Broadly speaking, Obama favors putting the power of the federal government on the side of average Americans.

He also has done so in the face of stiff resistance, at a time when the Republicans and many media pundits are enthralled by the revisionist narrative, that American “liberty” has always been about letting corporations and the rich do whatever they want and letting states dominate national governance.

Romney has come to personify that approach, an extremely wealthy financier who prides himself on paying low taxes and who in private settings with fellow millionaires speaks with disdain about the struggling masses and their need for government help. He also wants to defer to the states on major national problems like health care.

Whether on behalf of his Mormon ancestors or his Wall Street chums, Romney may see his quest for the presidency as a decisive moment to enshrine the anti-government narrative and to defeat the alternative one that says “We the People” in the Constitution’s Preamble means putting the power of government to work building a country for all.

Without doubt, the Framers were flawed men. Many were slave-owning aristocrats who feared the dangers of unrestrained democracy in which the downtrodden might demand a reversal of fortune for the rich. Some of Madison’s “checks and balances” were designed to avoid extreme swings in popular passions.

There were other obvious tensions within the constitutional structure regarding exactly where the boundaries of authority were. That, too, was part of Madison’s structure.

But the Framers clearly saw the Constitution as creating a powerful central government and a dynamic system that had the flexibility to address national problems, then and in the future. For instance, one of Madison’s most cherished features was the Commerce Clause, which gave the federal government the power to regulate national commerce.

The whole point of including the Commerce Clause among the enumerated powers of Congress was to put the federal government to work improving the economic conditions of the nation. In their time, the Framers talked about construction of roads and canals, but they also wanted the federal government to protect the competitiveness of U.S. commerce versus the more developed economies of Europe.

But that role along with that history is on the line in Election 2012. The American people can side with the actual Framers in treating the Constitution as a tool for addressing national problems or they can join with the Tea Partiers who embrace a false narrative that equates “freedom” with hostility toward the federal government.

If that’s the result, it could mean near total “freedom” for our fellow citizens, the corporations.