President Obama has infuriated Israeli Prime Minister Benjamin Netanyahu by rejecting his demand for a “red line” on war with Iran if it achieves the “capability” to build a nuclear weapon. The clash has led Netanyahu to brazenly intervene in the U.S. election, but is that all that new, asks Lawrence Davidson.

Much is being made of Israeli Prime Minister Benjamin Netanyahu’s involvement in the on-going American presidential campaign. His public stance has been characterized as an Israeli effort to  “openly…topple [President] Obama.”

The truth is that the only thing unusual about this meddling is its open and advertised nature. In a more discreet fashion, Zionist pressure bordering on blackmail and bribery goes on every day. I have written elsewhere about this corrupting process that I call “lobbification.” In brief, this is how it operates: 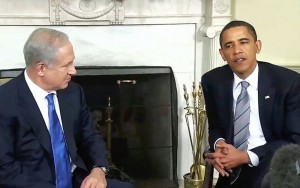 Step One:  A lobbyist, in this case someone from the American Israel Public Affairs Committee (AIPAC), approaches Congresspersons or Senators. At some point in time that means every single one of them has been approached:  all 435 voting members of Congress and every one of the 100 voting members of the Senate. Party affiliation is not an issue here.

Step Three: All that is asked in return is that the recipient consistently vote in a pro-Israel way. In other words, AIPAC wants the politician to surrender a part of his or her mind to the lobby — that part that might exercise critical and considered judgment on issues pertaining to Israel.

Step Four: There are several unspoken, but publicly acknowledged, consequences of turning down this offer, or alternatively, managing to get elected on your own and then voting the wrong way.

If you say no, the same offer will be made to your opponent both at the primary and general election levels. If you are elected and vote against Israel, AIPAC will do all it can, sooner or later, to see you defeated. It has a good record of turning such people out of office.

Step Five: If you sign up for this Faustian bargain and are elected, the lobby becomes your permanent partner. It is a constant presence. Its agents are always hovering about, rating your performance, letting you know they are there. Prove yourself reliable and they will underwrite you for life.

The President and Red Lines

President Obama made this bargain as solidly as have most other politicians in Washington. You can witness him affirming and reaffirming this deal in front of AIPAC conventions, while addressing the United Nations General Assembly, on those rare occasions when he addresses the press, and whenever else he feels it is politically necessary. He was even willing to debase his own national party convention (by altering the platform to say that Jerusalem must be Israel’s undivided capital) to make a point of his loyalty to the Israel lobby.

Yet all this has proven insufficient. The issue over which Obama has fallen short is Iran.

Israel’s Prime Minister Netanyahu (the deus ex machina of the Israel lobby) insists that Iran is preparing to build nuclear weapons and, taking that assumption on faith, their nuclear energy program should be stopped or placed under international control.

It should be noted that, back in 2002, Netanyahu incorrectly made the same charge against Iraq and that today, just as in 2002, there is no real evidence for his assertion about Iran’s aims. All U.S. intelligence agencies agree that the Iranians are not presently developing nuclear weapons.

Nonetheless, Netanyahu, who appears prone to OCD (obsessive compulsive disorder) when it comes to other people’s nuclear programs, demands that Washington set “red lines” for Tehran which, if crossed, would trigger U.S. military action.

In other words, on the basis of unsupported Zionist fears, the Israeli government is trying to maneuver the United States into yet another Middle East war. To his credit, President Obama has refused to comply with the demand for “red lines.”

The standard retribution practiced by the Israel lobby against a recalcitrant American politician is to try to get him or her kicked out of office.  Usually this is done in a low-key way and most Americans don’t even know it is happening. But this time the act of revenge, driven by an egocentric and bellicose Israeli prime minister, is being carried out in full public view. Here are some of the ways Netanyahu is doing this:

1. Netanyahu has joined Mitt Romney in accusing Barack Obama of being too easy on Iran and too unresponsive to an ally, Israel.

2. Netanyahu has acquiesced in the use of his image and words in a blatantly false and distorted media campaign that accuses Obama of being “cozy” with the Society of Muslim Brotherhood.

3. Netanyahu has asserted that Obama has “no moral right” to pressure Israel not to attack Iran. What the Prime Minister leaves out is that such an attack would constitute aggression under international law and violate treaties to which both the U.S. and Israel are signatories. Under these circumstances it would be immoral if President Obama did not pressure Israel to hold its fire.

4. When accused of interfering in the presidential elections, Netanyahu has replied, “This is not an electoral issue. I think there is a common interest of all Americans of all persuasions to stop Iran.”

The bit about this not being “electoral” is clearly disingenuous. If Netanyahu wants to hold an opinion about alleged common interests that is fine.  However, if as the head of a foreign government, he publicly and repeatedly asserts that opinion in ways that aid one candidate for president over another, he has certainly made both himself and his opinion, an “electoral issue.”

There is speculation that, if Mr. Obama is reelected, then Prime Minister Netanyahu’s indiscreet behavior might result in “a sea change in U.S.-Israeli relations.” Unfortunately this is highly unlikely. The system of “lobbification” is solidly in place at the national political level. When it comes to Israel, only two things are likely to change it:

1. Meaningful campaign finance reform that would free politicians from their present reliance on lobby affiliated contributions.

2. The Israel-American connection becomes a voting issue such that continued blind support for Israel hurts a politician’s chance of election.

Neither of these possibilities seem to be on the horizon. It is the way the U.S. political system is run that makes politicians so vulnerable to lobby power. The fact that there are some lobbies out there that have decent and humane goals is not sufficient to justify a system that otherwise does so much damage.

For instance, under the present circumstances it is impossible to define the national interest in an objective way. As it stands, the national interest is replaced by the parochial interests of lobbies that are successful at suborning Congress and the White House — Zionists pushing support for a racist and expansionist foreign power, Cuban-Americans carrying on a 53-year-old vendetta against the government in Havana, the NRA striving to protect the right of every American to own a submachine gun, and the like.

In large part it comes down to money and how it is used to manipulate leaders and parties. There is something age-old about this situation. It was the Roman Senator and master rhetorician Cicero (108 to 43 BCE) who said  “Nihil tam munitum quod non expugnari pecunia possit.” Translated as: “No fortification is such that it cannot be subdued with money.” That is still the rule by which lobbyists live.

← Dark Days Ahead in Afghan War
The Price of US Interventionism →