In his swan song to the UN General Assembly, Iran’s term-limited President Mahmoud Ahmadinejad is stirring up the usual media outrage with remarks on gays, freedom of speech and Israel. But the West still ignores a substantive Iranian proposal on uranium enrichment, writes Gareth Porter at Inter Press Service.

Iran has again offered to halt its enrichment of uranium to 20 percent, which the United States has identified as its highest priority in the nuclear talks, in return for easing sanctions against Iran, according to Iran’s permanent representative to the International Atomic Energy Agency (IAEA).

Ali Asghar Soltanieh, who has conducted Iran’s negotiations with the IAEA in Tehran and Vienna, revealed in an interview with IPS that Iran had made the offer at the meeting between EU Foreign Policy Chief Catherine Ashton and Iran’s leading nuclear negotiator Saeed Jalili in Istanbul Sept. 19. 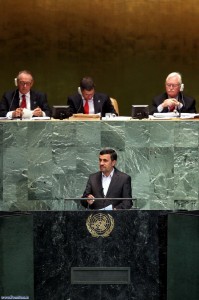 Soltanieh also revealed in the interview that IAEA officials had agreed last month to an Iranian demand that it be provided documents on the alleged Iranian activities related to nuclear weapons which Iran is being asked to explain, but that the concession had then been withdrawn.

“We are prepared to suspend enrichment to 20 percent, provided we find a reciprocal step compatible with it,” Soltanieh said, adding, “We said this in Istanbul.”

Soltanieh is the first Iranian official to go on record as saying Iran has proposed a deal that would end its 20-percent enrichment entirely, although it had been reported previously. “If we do that,” Soltanieh said, “there shouldn’t be sanctions.”

Iran’s position in the two rounds of negotiations with the P5+1 China, France, Germany, Russia, Britain, the United States and Germany earlier this year was reported to have been that a significant easing of sanctions must be part of the bargain.

The United States and its allies in the P5+1 ruled out such a deal in the two rounds of negotiations in Istanbul and in Baghdad in May and June, demanding that Iran not only halt its enrichment to 20 percent but ship its entire stockpile of uranium enriched to that level out of the country and close down the Fordow enrichment facility entirely.

Even if Iran agreed to those far-reaching concessions the P5+1 nations offered no relief from sanctions.

Soltanieh repeated the past Iranian rejection of any deal involving the closure of Fordow. “It’s impossible if they expect us to close Fordow,” Soltanieh said.

The U.S. justification for the demand for the closure of Fordow has been that it has been used for enriching uranium to the 20-percent level, which makes it much easier for Iran to continue enrichment to weapons-grade levels.

That conversion to powder for fuel plates makes the uranium unavailable for reconversion to a form that could be enriched to weapons grade level.

Soltanieh suggested that the Iranian demonstration of the technical capability for such conversion, which apparently took the United States and other P5+1 governments by surprise, has rendered irrelevant the P5+1 demand to ship the entire stockpile of 20-percent enriched uranium out of the country.

“This capacity shows that we don’t need fuel from other countries,” said Soltanieh.

Iran began enriching uranium to 20 percent in 2010 after the United States made a virtually non-negotiable offer in 2009 to provide fuel plates for the Tehran Research Reactor in return for Iran’s shipping three-fourths of its low-enriched uranium stockpile out of the country and waiting for two years for the fuel plates.

The P5+1 demand for closure of the Fordow enrichment plant was also apparently based on the premise the facility was built exclusively for 20-percent enrichment. But Iran has officially informed the IAEA that it is for both enrichment to 20 percent and enrichment to 3.5 percent.

The 1,444 centrifuges installed at Fordow between March and August but not connected to pipes, according to the Washington-based Institute for Science and International Security could be used for either 20-percent enrichment or 3.5-percent enrichment, giving Iran additional leverage in future negotiations.

Soltanieh revealed that two senior IAEA officials had accepted a key Iranian demand in the most recent negotiating session last month on a “structured agreement” on Iranian cooperation on allegations of “possible military dimensions” of its nuclear program only to withdraw the concession at the end of the meeting.

The issue was Iran’s insistence on being given all the documents on which the IAEA bases the allegations of Iranian research related to nuclear weapons which Iran is expected to explain to the IAEA’s satisfaction.

The Feb. 20 negotiating text shows that the IAEA sought to evade any requirement for sharing any such documents by qualifying the commitment with the phrase “where appropriate”.

At the most recent meeting on Aug. 24, however, the IAEA negotiators, Deputy Director General for Safeguards Herman Nackaerts and Assistant Director General for Policy Rafael Grossi, agreed for the first time to a commitment to “deliver the documents related to activities claimed to have been conducted by Iran,” according to Soltanieh.

At the end of the meeting, however, Nackaerts and Grossi “put this language in brackets”, thus leaving it unresolved, Soltanieh said.

Former IAEA Director General Mohamed ElBaradei recalls in his 2011 memoirs that he had “constantly pressed the source of the information” on alleged Iranian nuclear weapons research meaning the United States “to allow us to share copies with Iran”. He writes that he asked how he could “accuse a person without revealing the accusations against him?”

ElBaradei also says Israel gave the IAEA a whole new set of documents in late summer 2009 “purportedly showing that Iran had continued with nuclear weapons studies until at least 2007.â€³

Soltanieh confirmed that the other unresolved issue is whether the IAEA investigation will be open-ended or not.

The Feb. 20 negotiating text showed that Iran demanded a discrete list of topics to which the IAEA inquiry would be limited and a requirement that each topic would be considered “concluded” once Iran had answered the questions and delivered the information requested.

But the IAEA insisted on being able to “return” to topics that had been “discussed earlier,” according to the February negotiating text. That position remains unchanged, according to Soltanieh. The Iranian ambassador quoted an IAEA negotiator as asking, “What if next month we receive something else, some additional information?’”

Soltanieh told IPS a meeting between Iran and the IAEA set for mid-October had been agreed before the IAEA Board of Governors earlier this month with Nackaerts and Grossi.

The Iranian ambassador said the IAEA officials had promised him that Director General Yukia Amano would announce the meeting during the Board meeting, but Amano made no such announcement.

Instead, after a meeting with Fereydoun Abbasi, Iran’s Vice President and head of the Atomic Energy Organization of Iran, Amano only referred to the “readiness of Agency negotiators to meet with Iran in the near future.”

“He didn’t keep the promise,” said Soltanieh, adding that Iran would have to “study in the capital” how to respond.

Soltanieh elaborated on Abassi’s suggestion last week that the sabotage of power to the Fordow facility the night before an IAEA request for a snap inspection of the facility showed the agency could be infiltrated by “terrorists and saboteurs”.

“The objection we have is that the DG (Director General) isn’t protecting confidential information,” said Soltanieh. “When they have information on how many centrifuges are working and how many are not working (in IAEA reports), this is a very serious concern.”

Iran has complained for years about information gathered by IAEA inspectors, including data on personnel in the Iranian nuclear program, being made available to U.S., Israeli and European intelligence agencies.

Gareth Porter, an investigative historian and journalist specialising in U.S. national security policy, received the UK-based Gellhorn Prize for journalism for 2011 for articles on the U.S. war in Afghanistan. [This article was first published by Inter Press Service.]

← A March of Folly Toward Iran
Americans Sour on Endless War →