After 11 years, the U.S.-led war in Afghanistan like the ill-fated war in Iraq is grinding toward a strategic defeat for Washington. The latest setback is the suspension of joint operations with Afghan troops after a rash of killing of NATO trainers by Afghan soldiers, write Shah Noori and Gareth Porter for Inter Press Service.

By Shah Noori and Gareth Porter

Sharply increased attacks on U.S. and other NATO personnel by Afghan security forces, reflecting both infiltration of and Taliban influence on those forces, appear to have outflanked the U.S.-NATO command’s strategy for maintaining control of the insurgency.

The Taliban-instigated “insider attacks,” which have already killed 51 NATO troops in 2012 (already 45 percent more than in all of 2011), have created such distrust of the Afghan National Army (ANA) and national police that the International Security Assistance Force (ISAF) command has suspended joint operations by NATO forces with Afghan security units smaller than the 800-strong battalion of Kandak and vowed to limit them in the future. 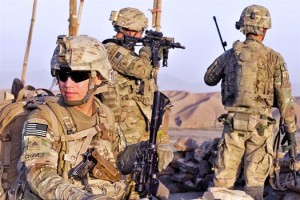 ISAF had intended to carry out intensive partnering and advising of ANA and police units below battalion level through 2012 to get them ready to take responsibility for Afghan security. Now, however, that strategy appears to have been disrupted by the insider attacks, and Afghan military and civilian officials are seriously concerned.

Secretary of Defense Leon Panetta sought to minimize the crisis in U.S. war strategy Tuesday by calling the inside attacks on NATO troops the “last gasp” of a Taliban insurgency that has been “unable to regain any of the territory that they have lost.” The “last gasp” phrase recalls then Vice-President Dick Cheney’s infamous 2005 claim that the Iraqi insurgency was “in its last throes.”

But Gen. Martin Dempsey, chairman of the U.S. Joint Chiefs of Staff, called the attacks “a very serious threat to the campaign” in an interview on Saturday. “You can’t whitewash it,” said Dempsey. “We can’t convince ourselves that we just have to work harder to get through it. Something has to change.”

The ISAF command also tried to downplay the significance of the decision, portraying it as “temporary” and not unlike previous adjustments to high threat conditions. The ISAF press release vowed that it would “return to normal operations as soon as conditions warrant.”

But the Taliban have power over whether conditions return to a level that would allow resumption of the joint operations between NATO and Afghan forces, which have been touted as the key to preparing the ANA and the police to cope with the Taliban on their own. The Taliban have achieved a strategic coup by creating a high degree of U.S.-NATO fear and mistrust of the Afghan forces.

Even if some joint operations are resumed, moreover, they will be limited to those approved by regional commanders, according to the new policy. And White House spokesman Jay Carney appeared to contradict the ISAF “return to normal operations” language, telling reporters, “Most partnering and advising will now be at the battalion level and above.”

ISAF Commander Gen. John Allen has tried in the past to minimize the role of the Taliban in the insider killings, suggesting that as little as 10 percent of the Afghan soldiers and police who killed NATO troops were Taliban infiltrators. Most of the killers acted out of personal anger at their Western advisers, Allen argued.

But Allen also conceded that, in addition to Taliban infiltrators, some Afghan troops may have acted out of “radicalization or having become susceptible to extremist ideology.”

New evidence suggests that the Taliban had influenced a number of ANA and police who killed NATO personnel. Last month, the Taliban’s media arm released a video showing a Taliban commander in eastern Kunar province welcoming two ANA soldiers who they said had killed U.S. and Afghan troops earlier in the year. Based on the video, the Long War Journal judged that neither of the soldiers had been a Taliban infiltrator but had made the decision in response to Taliban urging.

Douglas Ollivant, who was senior counterinsurgency adviser to the U.S. commander of the regional command for eastern Afghanistan in 2010 and 2011, told IPS the evidence indicates that most Afghan personnel who killed NATO troops and were not already Taliban when they joined the security forces had later become “de facto infiltrators.”

In the Afghan rural social context, the local Taliban and the Afghan troops and soldiers “all know each other,” Ollivant said. “It’s not like they are from two different planets.”

Lt. Col. Danny Davis, who traveled extensively across Afghanistan during his 2010-2011 tour of duty there, found evidence that the Taliban had indeed achieved influence over the Afghan security forces who were supposed to be helping U.S.-NATO forces root out the insurgents.

In a draft report he wrote earlier this year, which had circulated within the U.S. government and was leaked to Rolling Stone magazine, Davis wrote, “In almost every combat outpost I visited this year, the troopers reported to me they had intercepted radio or other traffic between the ANSF and the local Taliban making essentially mini-nonaggression deals with each other.”

In Zharay district of Kandahar province, Davis wrote, he found the Afghan security forces were “in league with the Taliban.”

Taliban spiritual and political leader Mullah Omar issued a statement on Aug. 16 saying the Taliban had “cleverly infiltrated the ranks of the enemy according to the plan given them last year.” Omar also called on Afghan security personnel to “defect and join the Taliban as matter of religious duty.”

For many months the U.S. has been putting intense pressure on the Afghan government to prevent such killings by “revetting” the personnel files of ANA and police personnel. Just last week, the government announced that it had removed “hundreds” of security forces from its ranks.

But there is very little the Afghan government can do to ensure against Afghan troops turning against NATO. “Vetting is virtually impossible in a place like Afghanistan,” former British commander Col. Richard Kemp told the Guardian.

There are no detailed files on the young recruits into the army and police. The only information on the vast majority of new recruits is a statement from village elders vouching for them.

Retired Lt. Col. Anthony Shaffer, senior fellow and director of communications at the Center for Advanced Defense Studies, told IPS that U.S. officers in Afghanistan don’t believe the Afghan government’s efforts to identify potential Taliban infiltrators or sympathizers will slow the pace of insider killings. “They are all saying it isn’t going to have any effect,” said Shaffer.

The decision by ISAF to pull back from joint operations with smaller Afghan units is regarded by Afghan officials and observers as a major boost to the Taliban and a potentially serious blow to the already shaky ANA and police.

Amarkhail said he doesn’t believe the ANA will be able to conduct operations without the help of NATO forces, because of poor coordination among Afghan security forces and its lack of modern weapons.

“If the foreign forces do not support and leave the Afghan Army in the present condition, things will get worse,” said Amarkhail. He expressed the fear that the result could be that different elements within the ANA will “turn their guns on each other.”

Dawoud Ahmadi, spokesman for Helmand Province Governor Mohammad Gulab Mangal, also expressed the fear that the ANA in the province will not be able to operate effectively against the Taliban if ISAF halts joint operations with the ANA at lower unit levels.

The spokesman told IPS, “We have problems in Helmand province, especially in the North. If NATO doesn’t help in conducting operations at lower level, the Afghan security forces will face problems, because they are not yet ready to launch operations on their own in that part of the province.”

Shah Noori reported from Kabul. Gareth Porter, an investigative historian and journalist specialising in U.S. national security policy, received the UK-based Gellhorn Prize for journalism for 2011 for articles on the U.S. war in Afghanistan. [This article originally appeared at Inter Press Service.]

← Cuba’s Post-Castro Future
How to Save the GOP →

4 comments for “A Taliban Gain in Afghanistan”