As the U.S. Constitution reaches its 225th birthday, the democratic Republic that it made possible is facing extraordinary threats to its survival, at least as anything but a shell of its former self. The main culprit is a relentless assault by the super-rich and their political/media handmaidens, says Beverly Bandler.

What a difference 25 years can make. The Constitution of the United States celebrated its 200 years of existence in 1987 with great fanfare. Warren E. Burger, chairman of the Commission on the Bicentennial of the Constitution and U.S. Chief Justice from 1969 to 1986, wrote of the “vitality of this remarkable document that has withstood two hundred years of change, including a Civil War, two World Wars, and forty years of ‘cold war.’ ”

Today, the Constitution retains its vitality and our reverence for it, but this anniversary is somber and with more than a hint of anxiety. Our Republic appears to be hanging by threads, division, discord and tribal politics are rife. Indeed, Americans appear engaged simultaneously in both a second Civil War and a second Gilded Age. 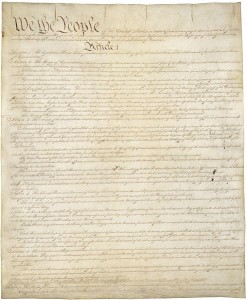 We have one political party of ultra-right extremists, “unlike any political party America has ever seen,” an anti-democratic combination of religious fundamentalists and corporatists who have purged, Soviet-style, their own moderates. This Republican Party is intent on not only destroying the President from the opposite main national party (and is quite public about it), but destroying the other main national party itself.

The Republican strategy has been obdurate, unrelenting obstructionism, one that will almost surely not end even if Barack Obama is re-elected this November. The GOP and its media allies don’t argue issues but rather seek to demonize enemies, if foreign enemies are not sufficient for this purpose, their own countrymen will do.

The political/media operatives of this modern Republican Party blatantly lie to the public, arrogantly indifferent to “fact checkers.” The irrationality on the Right seems to place its adherents in an alternative reality, hostile to science, empiricism and logic. Thus, many critics have come to question the Right’s sanity. The ultra-right conservatives in the U.S. today are sometimes compared to a cult, a religio/capitalist cult.

In recent years, the Democratic Party has had its share of notable accomplishments despite this ruthless obstructionism, but it has been less than effective in coping with the heavily financed ultra-right extremism. The Democrats have been slow to recognize both the nature and magnitude of their opposition and to take appropriate steps.

The Left has nothing comparable to the Right’s heavy investment in a Noise Machine, one purpose of which has been to turn the nation’s citizens against their own government. This strategy has been effective to an alarming degree.

This toxic winner-take-all politics has been complicated by a corporate mainstream media largely complicit with a Right that has the deep pockets to keep the mainstream media afloat with hefty advertising revenue, and an American public that is, generally speaking, of limited education (the phrase “dumbed down” is repeated often of late) and given to manipulation because it tends to operate more on belief and myth than facts.

Many voters are simply poorly informed. While a large number of U.S. citizens are angry and loudly belligerent, many others are apathetic. A third group appears to be simply confused. Suggestions have been made that today’s United States shares uncomfortable similarities with the Weimar Republic that preceded the Third Reich.

Americans are noted for supposedly “hating politics” but are quick to express heated political opinions. For instance, they are not shy about their opinions on the economy and where to place blame, though they don’t seem to fully appreciate the cause of the current fiscal crisis that began in late 2007.

So, as we observe the 225th anniversary of that day in Philadelphia Sept. 17, 1787 when the Constitutional Convention approved the Constitution, we also must note the erosion of the nation’s democratic ideals and respect for the rule of law. Rather than a healthy democratic Republic with a vibrant middle class, the United States shows all the signs of becoming an oligarchy with a relative few benefiting from the most severe economic inequality in U.S. history.

In essence, the traditional U.S. economy (that has existed at least since the end of World War II) is under siege (being plundered by Wall Street financiers and the rich). Yet very few voters understand how this economic pillaging is being done. Nor do they know much about real U.S. history, not to mention the history of other parts of the world.

The fine points of such economic terms as aggregate demand and supply and demand elude many Americans and many seem to embrace the myth of “trickle down” economics, appearing not to know that over the past several generations it has been the middle class that has driven the U.S. economy, not the largesse of the rich.

Further, the public is unaware that America’s Great Middle Class was not a natural outgrowth of the nation’s economic system. It was, as journalist Robert Parry has pointed out: “the creation of the federal government and especially the New Deal” of President Franklin Delano Roosevelt.

Americans appear to suffer from what has been called terminal historical amnesia, but they also seem oblivious to current conditions resulting from the Great Recession. A 2012 study reveals that almost half of all Americans are dying virtually penniless (yet the elderly represent one of the most reliable voting blocs for Republicans, helping them gain control of the U.S. House of Representatives in 2010 amid Tea Party calls for slashing domestic spending, like Medicaid, that benefits many senior citizens).

The authoritarians in the Republican Party also have been working to disenfranchise American voters (particularly in minority groups that represent strong voting blocs for Democrats), while wealthy right-wingers are spending millions of dollars on TV advertisements to essentially buy the 2012 elections.

The 5-4 ruling by the Republican-controlled U.S. Supreme Court in January 2010 Citizens United v. Federal Election Commission held that corporations are, in effect, citizens with the untrammeled right to flood the electoral process with money on an unimagined scale. Though the U.S. political process has always had flaws, money is now suffocating America’s democratic institutions.

Journalist Bill Moyers has stated that Americans are in “the fight of our lives” against political and economic forces that seek to radically transform the United States into a society divided between the rich and everyone else.

“The middle class and working poor,” Moyers said, “are told that what’s happening to them is the consequence of Adam Smith’s ‘Invisible Hand.’ This is a lie. What’s happening to them is the direct consequence of corporate activism, intellectual propaganda, the rise of a religious orthodoxy that in its hunger for government subsidies has made an idol of power, and a string of political decisions favoring the powerful and the privileged who bought the political system right out from under us. …

“I don’t have to tell you that a profound transformation is occurring in America: the balance between wealth and the commonwealth is being upended. By design. Deliberately. We have been subjected to what the Commonwealth Foundation calls ‘a fanatical drive to dismantle the political institutions, the legal and statutory canons, and the intellectual and cultural frameworks that have shaped public responsibility for social harms arising from the excesses of private power.’”

We could have seen this coming if we had followed the money. The veteran Washington reporter, Elizabeth Drew,  noted: “The greatest change in Washington over the past 25 years — in its culture, in the way it does business and the ever-burgeoning amount of business transactions that go on here — has been in the preoccupation with money.”

This “fight of our lives” is the result of at least a quarter century of political subterfuge not seen in our history. It is a big fight that is well beyond a single election. The change that many Americans hoped for in November 2008 was not possible at least immediately because we did not understand the nature or the magnitude of the problems we faced.

We need to comprehend as well that the real change America needs will probably take a couple of generations to achieve. It will be a long, tough fight, but it is one in which all decent and responsible Americans must engage, one that they must win if the Republic and our democratic processes are to be saved.

It is a worthy goal, one to hold dear while looking forward to the 250th anniversary of the Constitution.

Beverly Bandler’s public affairs career spans some 40 years, serving as president of the state-level League of Women Voters of the Virgin Islands and extensive professional public education efforts in the Washington, D.C. area for 16 years. Bandler attended Sarah Lawrence College (‘59) and has a master’s degree in Public Administration from George Washington University (‘82). She writes from Mexico.

6 comments for “The Constitution’s Unhappy Birthday”