The neocon response toward the anger against the U.S. on the Arab and Muslim “street” is to lash out at those countries and to chastise President Obama for his early efforts at out-reach. But Middle East specialists Flynt and Hillary Mann Leverett say the real problem was the lack of follow-through.

We begin by noting our sadness over the deaths of Ambassador Christopher Stevens and the others who were killed at the consulate in Benghazi. Hillary knew and worked with Chris Stevens during her service in the State Department; he was very highly regarded, professionally and personally, among his colleagues.

In the United States, much of the early discussion about the attack in Benghazi has focused on a question that Secretary of State Hillary Clinton herself laid out: “How can this happen in a country we helped liberate, in a city we helped save from destruction?” 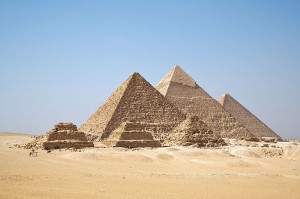 The pyramids at Giza in Egypt. (Photo credit: Ricardo Liberato)

In fact, it is not so hard to understand how “this”, along with the protests at the U.S. Embassy in Cairo, subsequent protests at U.S. diplomatic facilities in Sanaa, Khartoum and across the region, and myriad other manifestations of resentment against the United States in much of the Arab and Muslim worlds, could happen.

This reality is now crashing in on U.S. ambitions in the Middle East every day. Yet, as Hillary noted, Americans “have not even begun to grapple with the enormity of the challenge we face as countries become more politically participatory, and people have a voice.”

Over the past few days, we’ve heard more than a few politicians and commentators recommend cutting off aid, or demand that Egyptian President Morsi adopt a tougher rhetorical stance against “extremist” discourse in his own Muslim Brotherhood if he wants a coveted meeting with President Barack Obama.

Against this, Hillary countered that “it a fantasy to think that [the United States] has cards to play,” with which it can leverage key local actors. “The President of Egypt, before he comes to the United States, his first trips were to China and Iran. The train has left the station in these countries, and unless [Washington] figures out how to adapt, [its] strategic position in the Middle East and, therefore, globally will continue to erode.”

So far, though, the United States is clearly not adapting. Why are Americans so reluctant to grapple with Middle Eastern reality? Hillary addressed this critical question on Al Jazeera:

“There’s a really fundamental flaw in U.S. strategic policy and it has to do with empire. We look at each country, at each place, and we see the expatriates that we want to see in the cafÃ©s in Paris, who parrot our line about secular liberalism, and we arm, fund, and train them to go back and, in effect, impose a political order on those societies that have very different histories, characters, cares, and concerns. Those expatriates we listen to repeatedly, in Iraq, Iran, Libya, everywhere, we listen to them not because we’re stupid but because we have a very determined focus for dominance.”

Especially in a political season, American elites do not seem at all inclined toward soul-searching about their country’s foreign policy after the events of the past few days. Much has been made of Mitt Romney’s “shoot first, aim later” (to use President Obama’s phrase) comments on events in Libya and Egypt. But Hillary pointed out on Al Jazeera that other prominent Republicans, for example, Senator Charles Grassley of Iowa, have gone even further than Governor Romney, arguing that President Obama’s outreach to the Muslim world during his first year in office, most notably through major addresses delivered in Istanbul and Cairo, was a “mistake” that showed “weakness.”

This is, Hillary noted, the “wrong critique.” For Obama hardly fulfilled the promise that some believed was embodied in his 2009 Istanbul and Cairo speeches, or his campaign pledge not just to end the Iraq war but also to end the “mindset” that had gotten the United States into that strategically and morally failed project. Rather the Obama administration “walked back completely” from those commitments.

The real critique, which Romney, of course, won’t put forward, is “why is the Obama administration really so dishonest in its policies, and how could people in the Middle East really take America’s word seriously as a constructive force.” Until Americans and the politicians can address that, they never will understand “what is the reason” for Middle Easterners’ anger.

Flynt Leverett served as a Middle East expert on George W. Bush’s National Security Council staff until the Iraq War and worked previously at the State Department and at the Central Intelligence Agency. Hillary Mann Leverett was the NSC expert on Iran and from 2001 to 2003  was one of only a few U.S. diplomats authorized to negotiate with the Iranians over Afghanistan, al-Qaeda and Iraq. [This article was originally published at RaceforIran.com. For direct link, click here: http://www.raceforiran.com/protests-in-the-muslim-world-can-the-united-states-deal-effectively%e2%80%94and-honestly%e2%80%94with-politically-empowered-muslim-societies

← Congress at the Trough
The Constitution’s Unhappy Birthday →