The makers of an anti-Islamic propaganda video achieved what they apparently intended, inciting a violent reaction among Muslim and creating new tensions between Islam and the West. But the killing of four U.S. diplomatic personnel raises questions about whether legal lines were crossed, maintains Lawrence Davidson.

When I finish one of my analyses, I usually look forward to a week to 10-day hiatus and sometimes even wonder if I will have to hunt around for the next topic. It rarely works out that way. Usually, within three or four days, something happens which strikes me as worthy of attention. Often other commentators have moved more quickly than I to report on the event. However, there are always more questions to be asked and different perspectives to be offered.

So it is with the death of four American diplomats, including Ambassador Chris Stevens, in Libya on Sept. 12. There are two mutually reinforcing parts to this tragedy: one takes place here in the U.S., and the other in Libya, Egypt and several other places in the Middle East. Let’s take them in sequence based on the currently available evidence: 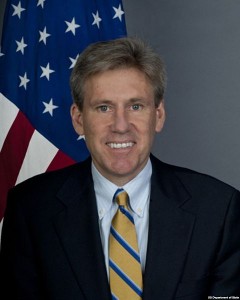 In summer 2011, a convicted felon by the name of Nakoula Bassely Nakoula, aka Sam Bacile (whose crime was bank fraud) decided to make a movie about the religion of Islam. Nakoula is an Islamophobe of Egyptian Coptic Christian background who lives in California. The movie was to be one of those propaganda pieces like the film “Obsession” back in 2005, but cruder and with more “shock value.”

Nakoula went about contacting other Islamophobes to raise the money and otherwise promote the project. Among those he recruited were Morris Sadek, a fellow Copt who also resided in the U.S. and whose long-term goal was to undermine the new Islamic government in Cairo.

Another was a Christian fundamentalist extremist by the name of Steve Klein who also seems to have an obsessive hatred of Muslims. Hovering around the margins of the project was the extremist “pastor” Terry Jones from Gainesville, Florida, who is an expert at inciting riots, having publicly burnt a Quran in 2011 sparking violence in Afghanistan that resulted in the death of 30 people.

Eventually, Nakoula put together a cast and crew by setting up what can only be described as a confidence game. He told the actors and stage technicians that the movie was about a “desert warrior” living in the remote past, ”a benign biblical epic” about past life in the Middle East. The initial working title was “Desert Warrior.”

Later, the film was reedited and new dialogue was dubbed over the original script thereby transforming it into an anti-Muslim diatribe with a new, supposedly ironic, title “Innocence of Muslims.” Among other things, the film depicts Mohammad as a fraud and a lecher. Subsequently, CNN received a statement from those who worked on the project indicating that “the entire cast and crew are extremely upset. We are 100% not behind this film and were grossly misled about its intent and purpose.”

Of particular import is the strong suspicion that the real purpose of the film was to incite a violent reaction in the Muslim world. According to Steve Klein, interviewed after the eruption of protests in the Muslim world,  “we went into this knowing this was probably going to happen.”

Klein told Nakoula, “you are going to be the next Theo van Gogh,” the Dutch film maker who was murdered in 2004 after making a film that defamed Islam. Subsequently, Nakoula’s accomplice, Morris Sadek, contacted an Egyptian newspaper reporter, Gamel Girgis, and told him he had an exclusive story about a American who made an anti-Muslim video. Sadek’s obvious intention was to make the video known to the Egyptian public.

The Story in the Middle East

In July 2012, soon after “Desert Warrior” was morphed into “Innocence of Muslims,” a “trailer” for the film was posted on YouTube. It is still there (except in Egypt where it’s been blocked) and to date has garnered hundreds of thousands of hits. Just this month (September 2012), the video was dubbed in Arabic and posted on the Internet. That posting sparked anger in Egypt and elsewhere in the Muslim world.

Someone at the U.S. embassy in Cairo immediately sensed the danger that the film created. In an effort to defuse tensions, the embassy staffer posted a statement on the local Egyptian Internet that said in part, “The Embassy of the United States in Cairo condemns the continuing efforts by misguided individuals to hurt the religious feelings of Muslims as we condemn the efforts to offend believers of all religions. We firmly reject the actions by those who abuse the universal right of free speech to hurt the religious beliefs of others.”

However, the statement failed to prevent an assault on the U.S. Embassy in Cairo, the fatal attack on the U.S. consulate in Benghazi, Libya, and other protests around the Muslim world.

Though too late to stop the Cairo and Benghazi assaults, most Muslim governments moved to quell or contain the public anger. The Libyan government, which is beholden to the U.S. for its support in the overthrow of the Gaddafi regime, issued an apology for the Benghazi attack and began an immediate investigation. The militant group that stormed the consulate and killed Ambassador Stevens was readily identified, in part, because most of the violence was captured on film.

In Egypt, the newly elected president, Mohammed Morsi, himself a member of the Society of Muslim Brothers, was more nuanced in his reaction. He noted that Egyptians had guaranteed rights to “expressing opinion, freedom to protest and announcing positions but without assaulting private or public property, diplomatic missions or embassies.”

In a telephone conversation with President Barack Obama, Morsi “pledged to protect foreigners in Egypt.” But he also told Obama that there was a need for “deterrent legal measures against those who want to damage relations between peoples, and particularly between the people of Egypt and the people of America.” It is a need that Americans should take seriously.

Besides the immediate death and destruction, this incident has exposed a deep vein of anger against the United States that runs through the Muslim world. This anger is nothing new and we continue to ignore it at our peril.

After the 9/11 terror attacks, U.S. politicians refused to consider the context from which those attacks came, asserting simply that the violence against the United States was absolutely wrong and so there was no need to examine what had caused it. Well, that might be good politics stateside, but it guaranteed that the policies and behavior that led up to the 9/11 attacks would carry on into the future, such as imposing sanctions that ruin the lives of countless innocents, intervening militarily in Muslim countries, the arming and protection of dictators, and the carte blanche support of Israeli policies against the Palestinian people.

In other words, between 9/11/01 and 9/11/12 nothing substantial about U.S. behavior has changed. That means the Muslim world continues to be a tinder box that someone living in the West, someone like Nakoula Bassely Nakoula, can throw a match into and spark more violence.

At this point, many will argue that Nakoula’s perverse film is protected under the First Amendment of the U.S. Constitution, which prohibits the abridgment of speech and press. But this may not be entirely true. Free speech does not excuse purposeful efforts to incite a riot.

An enterprising prosecutor might be able to prove beyond a reasonable doubt that the entire enterprise that created “Innocence of Muslims” was a premeditated effort to produce exactly the type of violence that we have seen. If that’s the case, Nakoula Bassely Nakoula, Steve Klein and Morris Sadek could be potential targets of a criminal investigation into the promotion of hate speech that contributed to murder.

The governments of the Muslim world, and indeed all governments, have the legal and moral obligation to protect foreign diplomats, embassies and consulates. And, the U.S. government has the responsibility to do all that is reasonable and practicable to protect its citizens. That includes the prevention of another 9/11-style attack or any variant on that theme.

Moving to prosecute those here in the United States who would purposely incite such attacks seems an obvious step and, in the long run, a step that is more useful than filling the skies with drones in search of alleged enemies.

Yet, as obvious and warranted as such a prosecution might be, will it be pursued? Do not look to Mitt Romney to propose such a preventative action. His sole concern is taking political advantage of the crisis by claiming that the State Department statement cited above proved that the Obama administration had more sympathy for the Muslims than for our own dead diplomats.

That is, of course, cynical nonsense. Yet, one cannot look to President Obama for much preventative action either. He is afraid of the political shadow to his right and will not move against even the most psychopathic actors, especially at election time.

So the most likely scenario is that, just as in 2001, our leaders will do nothing to address our own behavioral and policy shortcomings. Thus, the dangerous likelihood of more provocations igniting the deep anti-American anger in the Muslim lands will go on and on.

← What Jesus Meant about Love
The Mystery of Neocon Influence →