Many Christians claim a personal relationship with Jesus but show little regard for his commandments to serve the poor and love thy neighbor. Some conceal these contradictions by narrowing the definition of “neighbor,” as Rev. Howard Bess explains.

Jesus set his ethical agenda in a conversation with a Scribe, who asked Jesus about the greatest of commandments. Jesus responded with not one but two: “You shall love God with heart, mind, strength and soul” and “You shall love your neighbor as yourself.”

Jesus’s response is recorded in Mark 12:28ff, and similar statements are found in the Matthew and Luke gospels. Since then, Christians have never disputed his standards; however, over the centuries Christians have argued over who constitutes a neighbor. 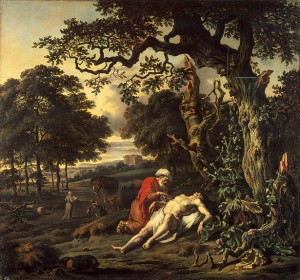 The vast majority of Christians over the past 2,000 years have conveniently avoided including all human beings in the embrace of a loving God.

And Christians have lots of company in this selectivity. Ancient Israelites had the same problem. Indeed, when Jesus recited his “love your neighbor” commandment, he was not cutting an entirely new path. He was quoting Leviticus 19:18. However, put into the context of the larger Leviticus passage, neighbor went no further than members of one’s own family and clan or tribe.

The story of limiting the meaning of neighbor has a long history among the Israelites.  According to these historical traditions, Yahweh, the God of the Israelites, delivered them from slavery and gave them a great leader in the person of Moses. With the aid of a series of miracles, Moses led the Israelites out of Egypt, with their first significant stop at Mount Sinai, where God gave Moses the laws by which Israelites were to live.

But Sinai was not their destiny. They were headed toward a land of their own, what we call Palestine. There was a problem, however. The land was already occupied by coalitions of tribes that were ready to fight for what they had.

Scholars, using both Biblical and non-Biblical sources, have pieced together the story of how the Israelites came to control the entire Palestinian area. These Israelites were not a peace-loving people. They had experienced many cruelties in Egypt and were not about to submit easily to the tyranny of another powerful ruler.

In their view, Yahweh had freed them from slavery in Egypt, and it was Yahweh, who would keep the dream of a new life in a new land alive. To the careful reader, the nature of their God is found embedded in their tradition. Exodus 15:3 states “Yahweh is a man of war. Yahweh is his name.” The Israelite God was not a peace lover, and neither were the Israelites.

In their wilderness wanderings, the Israelites made contact with another wandering, landless tribe, the Habiru, whose name is related to the word Hebrew. The word habiru can properly be translated “outlaw.”

The Habiru’s existence is well established by Near East documents, though they existed outside the social and political structures of the era. They were a tribe skilled in war and often hired themselves out as mercenaries. Scholars today believe the Habiru and the Israelites joined forces and became a lethal war machine.

The new Israelite war machine systematically conquered the coalition tribes that controlled Palestine. The Israelites were ruthless, requiring that the tribes that occupied Palestine bow down to Yahweh (the war God) or be killed. Those who did not were slaughtered without mercy.  However, most chose to bow down to Yahweh and also became neighbors worthy of the love and courtesies of the growing Israelite clan.

Old Testament law makes it very clear that love was reserved for people, who embraced Yahweh as their God and who were thus absorbed into the Israelite nation.   This was the dominant definition of neighbor in Israelite history and tradition. But it was not unchallenged.

During the entire history of the Israelites, special people, called prophets, appeared to critique the behavior of leaders, whether kings or priests. Prophets seemed to appear from out of nowhere. They might be farmers, poets or actors. But the position was not inherited, nor were they elected. They were not controlled by leaders.

The word “prophet” can be translated as “delegated messenger” or “one who is called.”  But their weapon was the simple phrase: “thus says the Lord.” The Old Testament prophets can best be understood as protesters who contested the standards and actions of those in power. It was the prophets, who had differing opinions about the definition of the neighbor, who was to be loved.

Jesus from Nazareth lived and taught in the tradition of the protesting prophet. A lawyer once asked Jesus “and who is my neighbor?”  Jesus did not give a direct answer but rather told the story of the Good Samaritan. Jesus was including the Samaritan, though coming from a despised group, as a neighbor.

7 comments for “Narrowing ‘Love Thy Neighbor’”