A new inspections report about Iran’s nuclear program prompted the usual alarmist headlines in U.S. newspapers about the growing need to attack Iran. But details in the report suggest that Iran is holding back from any “breakout” capability to build a nuclear bomb, reports Gareth Porter for Inter Press Service.

The International Atomic Energy Agency (IAEA) report made public Thursday reveals that Iran has actually reduced the amount of 20-percent enriched uranium available for any possible “breakout” to weapons grade enrichment over the last three months rather than increasing it.

Contrary to the impression conveyed by most news media coverage, the report provides new evidence that Iran’s enrichment strategy is aimed at enhancing its bargaining position in negotiations with the United States rather than amassing such a breakout capability. 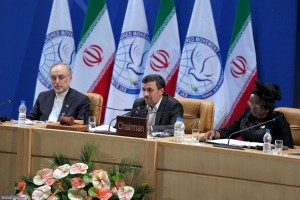 That higher level enriched uranium has been the main focus of U.S. diplomatic demands on Iran ever since 2009, on the ground that it represents the greatest threat of an Iranian move to obtain a nuclear weapon capability.

When 20-percent uranium is used to make fuel plates, however, it is very difficult to convert it back to a form that can enriched to weapons grade levels. When data in the Aug. 30 IAEA report on the “inventory” of 20-percent enriched uranium is collated with comparable data in the May 25 IAEA report, it shows that Iran is further from having a breakout capability than it was three months earlier.

The data in the two reports indicate that Iran increased the total production of 20-percent enriched uranium from 143 kg in May 2012 to 189.4 kg in mid-August. But the total stockpile of 20-percent enriched uranium that could be more easily enriched to weapons grade and which has been the focus of U.S. diplomatic demands on Iran ever since 2009 fell from 101 kg to 91.4 kg during the quarter.

The reduction in the stockpile available for weapons grade enrichment was the result of the conversion of 53.3 kg of 20-percent enriched uranium into fuel plates compared with only 43 kg in the previous five months. Iran was thus creating fuel plates for its medical reactor faster than it was enriching uranium to a 20-percent level.

But although that reduction of the stockpile of enriched uranium of greatest concern to the United States was the real significance of the new report, it was not conveyed by the headlines and leads in news media coverage. Those stories focused instead on the fact that production of 20-percent enriched uranium had increased, and that the number of centrifuges at the underground facility at Fordow had doubled.

“Nobody has put out the story that their stockpile is shrinking,” said Joe Cirincione, president of the Ploughshares Fund and a leading independent specialist on nuclear weapons policy, in an interview with IPS.

David Sanger and William Broad of the New York Times asserted in an Aug. 30 story that Iran had “doubled the number of centrifuges installed” at Fordow and had “cleansed” the site where the IAEA believed there had been nuclear weapons development work. The story made no reference to fuel plates or the effective stockpile of 20-percent enriched uranium.

A second story by Sanger and Jodi Rudoren on the same day, datelined Jerusalem, was even more alarmist and inaccurate. It declared that the nuclear program was “speeding up” and that Iran was “close to crossing what Israel has said is its red line: the capacity to produce nuclear weapons in a location invulnerable to Israeli attack.”

Reuters and AP stories also focused on the doubling of centrifuges as the main message in the IAEA report, and Reuters also said Iran “seems to be struggling to develop more efficient nuclear technology that would shorten the time it would need for any atom bomb bid.”

The Washington Post headline said that Iran was “speeding up” uranium enrichment, and the lead said Iran had “substantially increased the production of a more enriched form of uranium in recent months”. But in the second paragraph, it added, somewhat cryptically, that Iran “appeared to take steps that would make it harder to use its uranium stockpile to make nuclear bombs”.

Only a few paragraphs later was it made clear that the lead was misleading, because the IAEA had found that Iran had “converted much of the new material to metal form for use in a nuclear research reactor.” It even quoted an unnamed Obama administration official who said it could not be “further enriched to weapons-grade material.”

In fact, the IAEA data showed that it had converted all of the uranium enriched to 20 percent during the quarter to fuel plates, and had converted some of the production from previous quarters as well.

The media reports of a doubling of the number of centrifuges at the underground facility at Fordow were also misleading. When the information is examined more carefully, it actually provides further evidence that Iran is not striving to amass the higher level uranium needed for a breakout capability but is maneuvering to prepare for a later negotiated settlement.

The 1,444 centrifuges that are not operating were never even connected by pipes, as the Institute for Science and International Security (ISIS) observed in its Aug. 30 commentary on the report.

The noncommittal character of the deployment of centrifuges at Fordow suggests that Iran has not decided whether those 1,444 centrifuges are to be committed to 3.5-percent enrichment or to 20-percent enrichment. The Obama administration appears to understand that this uncertainty about the purpose of the centrifuges is aimed at strengthening Iran’s diplomatic hand in future negotiations.

“They have been very strategic about it,” a senior U.S. official told the New York Times just before the report was made public. “They are creating tremendous capacity, but they are not using it.” The official added, “That gives them leverage, but they think it also stops short of creating the pretext for an attack.”

Cirincione agrees with that senior official’s analysis. “The Iranians are excellent chess players. They are moving their pieces very carefully,” he said. “They are continuing to enhance the value of their bargaining chips.”

The implication of the IAEA report, Cirincione believes, is that Iran is still maneuvering to position itself for a more advantageous agreement in future negotiations. “If you were the Iranians, why would you negotiate right now?” asked Cirincione. “You would want to wait for a better deal.”

In previous rounds of negotiations with Iran in 2012, the United States demanded an end to all 20-percent enrichment and even the closure of the Fordow facility but offered no alleviation of the harsh financial sanctions now being imposed on Iran.