Scandal-stained Republican activist Ralph Reed is back in the GOP’s good graces with a new “grassroots” operation organizing right-wing Christians. Also back on the Republican agenda is protection for an old Reed cause, maintaining sweatshops in the Marianas, note Bill Moyers and Michael Winship.

As the sun slowly sets over the Republican National Convention in Tampa, we settle back in the chairs that nice Mr. Eastwood just gave us and ponder some of the other oddities of the week. Like this item in the official GOP platform pointed out by Brad Plumer of The Washington Post:

“No minimum wage for the Mariana Islands.‘The Pacific territories should have flexibility to determine the minimum wage, which has seriously restricted progress in the private sector.’” 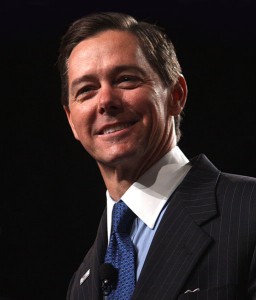 This caught our attention (and thanks to colleague Theresa Riley for sending) because it once again reminds us of the sordid past of evangelical and political entrepreneur Ralph Reed who, as this week’s edition of Moyers & Company reports in detail, has emerged from the ashes of epic career failure to reestablish himself as a powerful figure in Republican politics.

As head of the Faith and Freedom Coalition, Reed boasts he’s building a political dynamo of five million members with a massive database, an annual budget of $100 million and full-time lobbyists in all 50 state capitals, a colossal effort aimed at putting in place a right-wing social agenda and identifying and establishing contact with what it estimates as 27 million conservative voters in America. As you can imagine, with clout like that, Reed and his coalition were in high cotton at the Tampa convention.

Which brings us to that curious Mariana Islands minimum wage plank in the Republican platform. Some years ago, our government made an effort to clean up sweatshops on the islands including Saipan that have been under the control of the United States since the end of World War II.

Chinese women were brought over to the islands to work under awful conditions subject to forced abortions and prostitution and paid pennies for producing garments labeled “Made in the USA.”

Corrupt local officials hired the firm of infamous lobbyist Jack Abramoff — for more than $4 million — to try to stop the reforms proposed back in Washington. Abramoff, in turn, hired Ralph Reed and his political direct mail company, Millennium Marketing, to conduct a phony grassroots campaign urging Alabama Christians to write their local congressman to oppose the reforms.

Of course, Reed didn’t tell those Christians he was being paid to help keep running sweatshops that exploited women. Instead, he told them the reforms were a trick orchestrated by the Left and organized labor.

Limits on Chinese workers would keep them from being “exposed to the teachings of Jesus Christ.” His company explained it was just trying to encourage “grassroots citizens to promote the propagation of the Gospel” and that many of the workers were “converted to the Christian faith and return to China with Bibles in hand.”

With the explosion of the Jack Abramoff scandals and exposes by Ms. Magazine and other publications, the spotlight on the Marianas sweatshops finally did lead to congressional action, including a raise of the minimum wage and a law to federalize labor and immigration rules in the Marianas. The minimum wage now is $5.05 an hour, increasing to $5.55 on Sept. 30, but many in the Marianas business sector continue to oppose the amount hence the platform plank.

Meanwhile, increasingly vocal calls have come for the impeachment of the islands’ longtime governor, Benigno Fitial, an old Abramoff pal. Nonetheless, there Fitial was in Tampa, unrepentant and front and center, head of the islands’ official Republican delegation.

As for Reed, once exposed, his shameful ruse came back to haunt him when he tried to run for the Republican nomination for lieutenant governor of Georgia in 2006 his opponent told the Marianas story in a devastating attack ad.

Reed’s was a monstrous lie by one of the monumental hypocrites of our time. Yet he marches on, Christian soldier to the end, turning the temple of faith into one big ATM. There’s a word for this in the Bible: Abomination.