Republican vice presidential choice Paul Ryan calls himself a devout Catholic, but his right-wing politics would divert more wealth to the rich at the expense of the poor, the opposite of both the teachings of Jesus and the recommendations of the Vatican, notes Catholic ethicist Daniel C. Maguire.

Sound the alarm! There has been a Catholic coup d’etat in the United States of America! Six members of the Supreme Court are Catholics (just imagine the furor if six were Muslims or Jews!). Speaker of the House John Boehner and Senate minority leader Mitch McConnell are Catholics. And now, rising to top of this surging Catholic dynasty is the alleged Wunderkind of Republican economics, perky Paul Ryan.

Ryan wears his strange version of Catholicism with a jaunty sophomoric pride: “Catholic social doctrine is indispensable for officeholders.” If only Paul Ryan knew what “Catholic social doctrine” is he would take flight from it just as fast as he is scrambling from the Ayn Rand breasts that, as he has proclaimed, suckled him and inspired all his political and economic views. 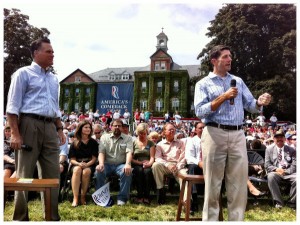 Catholics who know the difference between Jesus Christ and Ayn Rand skewered perky Paul. They know that Jesus’ mission, unlike Ayn Rand’s, was “good news for the poor” (Luke 4:18). They embarrassed the righteous Ryan when he spoke at the Jesuit Georgetown University carrying a sprawling sign that asked: “Where were you, Paul Ryan, when they crucified the poor?”

Of course they know where he was. He was driving the nails into everything that helps the poor and remember most of “the poor” are children. Budgets are intensely moral documents. They show where the heart is. To budget-makers we can say: show me the losers and the winners and I will tell you what you are.

The budget is not all sour. There are sweet tidings for the already engorged mega-rich. And as for the military, ah, yes, the military, Ryan feels they do not ask enough though they have never been known for modesty or timidity in their requests. Ryan would further feed that black hole in the economy that already sucks out some $2 million a minute. Kill-power is prized more highly than Head Start and Medicaid.

How Dare You, Paul Ryan!

How dare you invoke “Catholic social teaching” to bolster that warped and brutal vision! Had you presented that budget as an assignment in my theology class at Marquette University I would have had to give you an F and a note would go to your parents saying, “this student is wasting your tuition money.”

So, listen up, Paul, and I’ll show you why the “Nuns on the Bus” and Catholic university faculties are storming against your Catholic pretensions. It is no major undertaking to correct you. That’s why your ignorance must be classified as crass.

Just last year, in October 2011, Pope Benedict’s Pontifical Council on Justice and Peace gave all the help you need. The council summed up centuries of “Catholic social teaching” in a single document and applied it to today’s tottering global economy.

When asked about the document, you equivocated about whether you had read it. Clearly, from your recent utterances you either did not read it or you read it and trashed it. Small wonder. It would give Ayn Rand a stroke. Jesuit Thomas Reese said the document is “closer to the view of Occupy Wall Street that anyone in the U.S. Congress.”

Here it is in gist: The Vatican document supports fair taxation, greed-controlling regulation and bailouts “with public funds” when necessary. Now, brace yourself, Paul, it excoriates “neoliberals,” the greed-is-good creed of your right wing.

The document calls for an international solidarity that would end poverty and obsessive reliance on military violence for security. It calls for more active citizenship, not voter suppression. Internationally it calls for “a new model of a more cohesive, polyarchic international society that respects every people’s identity within the multifaceted riches of a single humanity.”

It calls for a “public, supranational authority with universal jurisdiction, a “true world political authority” and a “world bank” to preside over a “global, universal common good.” Nations need to “transfer a part of each nation’s powers to a world authority and to regional authorities.”

It does not call for a tyrannical despotic world authority. The traditional Catholic tradition of “subsidiarity” means that nothing should be done by a higher authority that can be done by active participation at lower levels. Right-wingers like you grab that one word “subsidiarity” and claim it supports their maniacal hatred of government. It doesn’t.

The document, like the Hebrew and Christian Bibles, considers government the prime care-taker of the common good with a particular mission to protect the powerless and the poor from exploitation.

Catholic social teaching abhors despotism, either that of governments or that of corporate power that can enslave the poor of the world as it is now doing. The blood, sweat and tears of the poor are on our clothing, our shoes and on our iPads. Using what is cynically and euphemistically called “labor arbitrage,” corporations ship most of their work to slave operations in “the third world.”

Now at this point, my student, Paul Ryan, is squirming in his seat. What I had just taught, relying on papal teachings, is not right wing. It is left wing in as much as the Left stresses social justice and fair distribution of wealth and opportunity, and the Left has a preference for peace-power over kill-power.

So, Paul Ryan, call your knavish, mean-spirited budget plan what you will. But do not call it Catholic. Stop defaming and insulting the stirring compassion and richness of Catholic social teaching by associating it with your form of upper-class warfare.

Have you no shame!

Daniel C. Maguire is a Professor of Moral Theology at Marquette University, a Catholic, Jesuit institution in Milwaukee, Wisconsin. He is author of A Moral Creed for All Christians. He can be reached at daniel.maguire@marquette.edu. (This article originally appeared as a blog post at HuffingtonPost.)