Exclusive: A Russian judge has sentenced three female “punk” rockers from the group “Pussy Riot” to two years in prison for performing a protest song at a Moscow cathedral, what the judge called anti-religious “hooliganism.” But Ray McGovern sees the protest as in the spirit of Mary, mother of Jesus.

The song to which the punk band “Pussy Riot” danced on Feb. 21 in Russia’s iconic Christ the Savior Cathedral ends with a prayer asking Jesus’s mother Mary to “become a feminist,” but Mary always was a feminist through and through, with a voice speaking strongly for justice.

Centuries of saccharine portraits and iconography have obscured a more reality-based appreciation of this gutsy young woman. But recent scripture study throws light on how Mary implanted a vision of inclusive justice into the heart of Jesus. 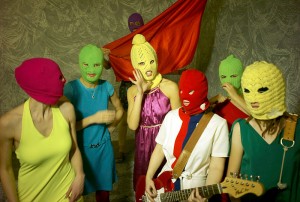 Though Mary is not given a lot of airtime by the men who wrote the scriptures, it is not hard to figure out where she was coming from. Just give her a brief sound bite and those within earshot would have found her profoundly subversive of a corrupt system not unlike that existing today in the punk band’s Russia.

In Mary’s time, the religious authorities in Palestine were working hand in glove with the Herod-type sycophants of Caesar, and doing quite well, thank you very much. (No invidious comparison with Emperor Putin and the successfully co-opted Russian Orthodox prelates is intended, of course.)

Mary is thought to have been several years younger than the courageous women of “Pussy Riot,” but she clearly shared both their outspoken exuberance and belief that God was, in the end, a God of justice and would deliver. Here’s Mary upon learning she was to be the mother of Jesus, who might just deliver the Jewish people from their oppressors:

I am bursting with God-news; I’m dancing the song …

Pulled victims out of the mud.

The starving poor sat down to a banquet;

The callous rich were left out in the cold. …

With Abraham and right up to now.”

As the passage shows, Mary was outspoken in her advocacy of inclusive justice, the biblical precondition for Shalom, which can be defined as peace, completeness or the elusive moment when everything is right. For in the biblical perspective, peace is no more nor less than the experience of justice.

Mary was in good company. Indeed, her views fit within the tradition of Miriam and other women prophets. Those familiar with the Hebrew scriptures may recall the part of Exodus recording the song and dancing of Miriam right after the Israelites make it to dry land just ahead of the ill-fated “horses and chariots of Pharaoh”:

The prophetess Miriam, Aaron’s sister, took a tambourine in her hand, while all he women went out after her with tambourines, dancing; and she led them in the refrain:

Horse and chariot he has cast into the sea.

Bible accounts include a long line of courageous women celebrating freedom, justice and Shalom. These stories of women include what is perhaps the first celebration of highly imaginative, as well as bold, nonviolent civil disobedience.

Who remembers Shiphrah and Puah from the first chapter of Genesis? Okay, here’s a brief refresher. They were the two midwives who defied Pharaoh’s order to snuff out the lives of all male Hebrew babies at birth. “Despite Pharaoh’s command,” says Genesis, “they feared God and refused to kill the boy babies.”

When Egypt’s homeland security operatives told Pharaoh of this defiance, he called Shiphrah and Puah on the carpet. They provided an artful alibi: “Hebrew women are not like Egyptian women. Hebrews deliver their babies very quickly, before the midwives can get to them.”

Obstetrics at the time being at their infancy, so to speak, it is possible that Pharaoh’s physicians concurred. I am no biblical exegete and have read no biographies of that particular Pharaoh, but it seems to me equally possible that he was so bemused by their grit and imagination, and perhaps even by their instinctive rejection of infanticide, that he decided to let them off the hook.

In any case, without the fabled courage of Shiphrah and Puah, as the story goes, Moses and his big brother Aaron would never have gotten anywhere near the Red Sea. It strikes me as of a kind with the example set not only by “Pussy Riot,” but also strong American women witnesses for justice, in the Catholic Worker movement, for example, and in Code Pink.

And so back to the witness of the three women of “Pussy Riot,” sentenced to two years of prison for “hooliganism motivated by religious hatred.” The facts strongly suggest that it was not “religious hatred,” but rather hatred of the undisguised, pandering role to which the Russian Orthodox Church has reverted in giving unqualified political support for President Vladimir Putin, as it did for the Tsars.

This can be seen in the following verses of their offending song, which clearly refer to Tsar Putin, formerly a senior official in the KGB and later head of the FSB, a successor agency to the KGB:

All parishioners crawl to bow

The phantom of liberty is in heaven …

The head of the KGB, their chief saint.

Leads protesters to prison under escort

In order not to offend his Holiness …”

The punk musician JD Samson, interviewed on “Democracy Now,” shared this word of praise for the courage of the young Russian women in standing up to the highly authoritarian Russian government:

“One of the things that’s really strong for everyone is that they are staying so incredibly confident and strong. They’re standing there in handcuffs in a cage smiling, because they know that what they’ve done is ignite a fire in the rest of the world, and they’re extremely happy to have done so. And, yeah.”

Ray McGovern works with Tell the Word, a publishing arm of the ecumenical Church of the Saviour in inner-city Washington, DC. He has a M.A. in Russian from Fordham and holds a Certificate in Theological Studies from Georgetown. He is a radical feminist.