Exclusive: As the clock ticks down to the U.S. elections in November, another clock is ticking in Tel Aviv and Jerusalem, whether Israeli forces should exploit the American political timetable to pressure President Obama to support an attack on Iran’s nuclear sites, writes ex-CIA analyst Ray McGovern.

More Washington insiders are coming to the conclusion that Israel’s leaders are planning to attack Iran before the U.S. election in November in the expectation that American forces will be drawn in. There is widespread recognition that, without U.S. military involvement, an Israeli attack would be highly risky and, at best, only marginally successful.

At this point, to dissuade Israeli leaders from mounting such an attack might require a public statement by President Barack Obama warning Israel not to count on U.S. forces, not even for the “clean-up.” Though Obama has done pretty much everything short of making such a public statement, he clearly wants to avoid a confrontation with Israel in the weeks before the election. 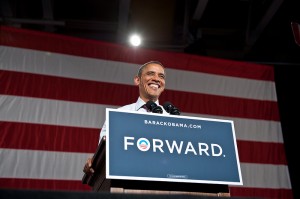 The recent pilgrimages to Israel by very senior U.S. officials, including the Secretaries of State and Defense carrying identical “PLEASE DON’T BOMB IRAN JUST YET” banners, has met stony faces and stone walls.

Like the Guns of August in 1914, the dynamic for war appears inexorable. Senior U.S. and Israeli officials focus publicly on a “window of opportunity,” but different ones.

On Thursday, White House spokesman Jay Carney emphasized the need to allow the “most stringent sanctions ever imposed on any country time to work.” That, said Carney, is the “window of opportunity to persuade Iran … to forgo its nuclear weapons ambitions.”

That same day a National Security Council spokesman dismissed Israeli claims that U.S. intelligence had received alarming new information about Iran’s nuclear program. “We continue to assess that Iran is not on the verge of achieving a nuclear weapon,” the spokesman said.

Still, Israel’s window of opportunity (what it calls the “zone of immunity” for Iran building a nuclear bomb without Israel alone being able to prevent it) is ostensibly focused on Iran’s continued burrowing under mountains to render its nuclear facilities immune to Israeli air strikes, attacks that would seek to maintain Israel’s regional nuclear-weapons monopoly.

But another Israeli “window” or “zone” has to do with the pre-election period of the next 12 weeks in the United States. Last week, former Mossad chief Efraim Halevi told Israeli TV viewers, “The next 12 weeks are  very critical in trying to assess whether Israel will attack Iran, with or without American backup.”

It would be all too understandable, given Israeli Prime Minister Netanyahu’s experience with President Obama, that Netanyahu has come away with the impression that Obama can be bullied, particularly when he finds himself in a tight political spot.

For Netanyahu, the President’s perceived need to outdistance Republican presidential candidate Mitt Romney in the love-for-Israel department puts Obama in a box. This, I believe, is the key “window of opportunity” that is uppermost in Netanyahu’s calculations.

Virtually precluded, in Netanyahu’s view, is any possibility that Obama could keep U.S. military forces on the sidelines if Israel and Iran became embroiled in serious hostilities. What I believe the Israeli leader worries most about is the possibility that a second-term Obama would feel much freer not to commit U.S. forces on Israel’s side. A second-term Obama also might use U.S. leverage to force Israeli concessions on thorny issues relating to Palestine.

If preventing Obama from getting that second term is also part of Netanyahu’s calculation, then he also surely knows that even a minor dustup with Iran, whether it escalates or not, would drive up the price of gasoline just before the election, an unwelcome prospect for Team Obama.

It’s obvious that hard-line Israeli leaders would much rather have Mitt Romney to deal with for the next four years. The former Massachusetts governor recently was given a warm reception when he traveled to Jerusalem with a number of Jewish-American financial backers in tow to express his solidarity with Netanyahu and his policies.

Against this high-stakes political background, I’ve personally come by some new anecdotal information that I find particularly troubling. On July 30, the Baltimore Sun posted my op-ed, “Is Israel fixing the intelligence to justify an attack on Iran?” Information acquired the very next day increased my suspicion and concern.

Former intelligence analysts and I were preparing a proposal to establish direct communications links between the U.S. and Iranian navies, in order to prevent an accident or provocation in the Persian Gulf from spiraling out of control. Learning that an official Pentagon draft paper on that same issue has been languishing in the Senate for more than a month did not make us feel any better when our own proposal was ignored. (Still, it is difficult to understand why anyone wishing to avoid escalation in the Persian Gulf would delay, or outright oppose, such fail-safe measures.)

Seeking input from other sources with insight into U.S. military preparations, I learned that, although many U.S. military moves have been announced, others, with the express purpose of preparation for hostilities with Iran, have not been made public.

One source reported that U.S. forces are on hair-trigger alert and that covert operations inside Iran (many of them acts of war, by any reasonable standard) have been increased. Bottom line: we were warned that the train had left the station; that any initiative to prevent miscalculation or provocation in the Gulf was bound to be far too late to prevent escalation into a shooting war.

SEARCHING FOR A CASUS BELLI

A casus belli, real or contrived, would be highly desirable prior to an attack on Iran. A provocation in the Gulf would be one way to achieve this. Iran’s alleged fomenting of terrorism would be another.

In my op-ed of July 30, I suggested that Netanyahu’s incredibly swift blaming of Iran for the terrorist killing of five Israelis in Bulgaria on July 18 may have been intended as a pretext for attacking Iran. If so, sadly for Netanyahu, it didn’t work. It seems the Obama administration didn’t buy the “rock-solid evidence” Netanyahu adduced to tie Iran to the attack in Bulgaria.

If at first you don’t succeed … Here’s another idea: let’s say there is new reporting that shows Iran to be dangerously close to getting a nuclear weapon, and that previous estimates that Iran had stopped work on weaponization was either wrong or overtaken by new evidence.

Israeli Defense Minister Ehud Barak told Israeli Radio that the new report is “very close to our [Israel’s] own estimates, I would say, as opposed to earlier American estimates. It transforms the Iranian situation to an even more urgent one.”

Washington Post neocon pundit Jennifer Rubin was quick to pick up the cue, expressing a wistful hope on Thursday that the new report on the Iranian nuclear program “would be a complete turnabout from the infamous 2007 National Intelligence Estimate that asserted that Iran had dropped its nuclear weapons program.”

“Infamous?” Indeed. Rubin warned, “The 2007 NIE report stands as a tribute and warning regarding the determined obliviousness of our national intelligence apparatus,” adding that “no responsible policymaker thinks the 2007 NIE is accurate.”

Yet, the NIE still stands as the prevailing U.S. intelligence assessment on Iran’s nuclear intentions, reaffirmed by top U.S. officials repeatedly over the past five years. Rubin’s definition of “responsible” seems to apply only to U.S. policymakers who would cede control of U.S. foreign policy to Netanyahu.

The 2007 NIE reported, with “high confidence,” the unanimous judgment of all 16 U.S. intelligence agencies that Iran stopped working on a nuclear weapon in the fall of 2003 and had not restarted it. George W. Bush’s own memoir and remarks by Dick Cheney make it clear that this honest NIE shoved a steel rod into the wheels of the juggernaut that had begun rolling off toward war on Iran in 2008, the last year of the Bush/Cheney administration.

The key judgments of the 2007 NIE have been re-asserted every year since by the Director of National Intelligence in formal testimony to Congress.

And, unfortunately for Rubin and others hoping to parlay the reportedly “new,” more alarmist “intelligence” into an even more bellicose posture toward Iran, a National Security Council spokesman on Thursday threw cold water on the “new” information, saying that “the U.S. intelligence assessment of Iran’s nuclear activities had not changed.”

“Foreign policy experts can debate whether a sanctions strategy was flawed from its inception, incorrectly assessing the motivations of the Iranian regime, or they can debate whether the execution of sanctions policy (too slow, too porous) was to blame. But we are more than 3 1/2 years into the Obama administration, and Iran is much closer to its goal than at the start. By any reasonable measure, the Obama approach has been a failure, whatever the NIE report might say.”

The NSC’s putdown of the Israeli report does not necessarily guarantee, however, that President Obama will continue to withstand pressure from Israel and its supporters to “fix” the intelligence to “justify” supporting an attack on Iran.

Netanyahu gives every evidence of believing that, for the next 12 weeks, he is in the catbird seat and that, if he provokes hostilities with Iran, Obama will feel compelled to jump in with both feet, i. e., selecting from the vast array of forces already assembled in the area.

Sadly, I believe Netanyahu is probably correct in that calculation. Batten down the hatches.

Ray McGovern works with Tell the Word, a publishing arm of the ecumenical Church of the Saviour in inner-city Washington. During his 27 years in CIA’s analysis division, his duties included preparing and delivering the President’s Daily Brief and chairing National Intelligence Estimates.

← The Know-Nothings Ride Again
Olympic Ideals and Reality of War →