The twin existential threats of nuclear weapons and global warming may work together to end life on Earth because climate dislocations will make desperate national confrontations more likely. But the world’s politicians are doing little about either, writes Robert Dodge.

This week marks the 67th anniversary of the nuclear bombings of Hiroshima and Nagasaki with the combined initial death toll of approximately 200,000 and thousands more in the years that followed. As Albert Einstein famously said, “With the dawn of the nuclear age everything changed save [except] our modes of thinking and thus we drift toward unparalleled catastrophe.”

The legacy of this new age of truly massive mortality weapons remains to this day and those prophetic words are ever true. The world is wired for instant destruction with current nuclear stockpiles in excess of 20,000 weapons holding the entire world hostage. There is no chance of survivability of nuclear war for much of humanity and no remotely adequate medical or civil defense response if these weapons are ever used. 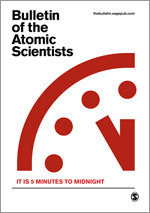 The "doomsday clock" set at five minutes to midnight by the Bulletin of the Atomic Scientists.

At a time when global economies are on life support and the United States is eking out an economic recovery, we are spending over $54 billion annually on nuclear weapons programs. As we face economic challenges every day with so many of our infrastructure and pressing human needs of education, medical care, police and fire protection going unmet, we can ill afford this expense. The nuclear weapons industry has no usefulness.

Environmental challenges are real and threaten us daily. Climate change itself and its associated depletion of resources is a source of conflict. Gen. Anthony C. Zinni, a retired Marine and the former head of the Central Command, warned:

“We will pay for this (climate change) one way or another. We will pay to reduce greenhouse gas emissions today, and we’ll have to take an economic hit of some kind. Or we will pay the price later in military terms. And that will involve human lives.”

In a nuclear world, all war has the real possibility of going nuclear and yet we allow the continued existence of these weapons and incomprehensible stockpiles. In addition nuclear weapons production, accidents, storage and use have left us with an environmental risk and legacy that will extend for an unimaginable half a million years while civilization has existed for just a few thousand years.

If these weapons are ever used in a full-scale nuclear war the extreme climatic change that follows would end life as we know it.

Nuclear reactors further compound the nuclear legacy both from an environmental and health standpoint as last year’s Fukushima disaster so readily makes clear. The long term effects on health and the environment may never be fully known and it will take years to determine the cancer and increased death toll.

From a military standpoint, the average nuclear power plant produces enough plutonium each and every year to produce 100 nuclear bombs. That’s the equivalent of 3,000 nuclear bombs per reactor over a 30-year nuclear plant life. The U.S. has 104 commercial nuclear power reactors. As a result, the world is awash with plutonium, the most deadly substance on the planet.

How can this continue? International surveys regarding public support for nuclear weapons show 76 percent of global citizens favoring the complete elimination of nuclear weapons. Here in the United States, 77 percent of U.S. citizens favor their elimination. Their utility among military planners is also questioned with the U.S. Air Force and nuclear planners suggesting that our stockpiles could be reduced to ~300 weapons.

In this presidential campaign year we are given a real choice regarding nuclear policy. President Barack Obama early on in his presidency expressed his vision of a world free of all nuclear weapons and worked tirelessly to gain bipartisan support and Senate passage of the New START Treaty.

This is the first nuclear arms reduction treaty in eight years and marked an important resumption of a dialogue with Russia which, along with the U.S., has 93 percent of the world’s nuclear weapons.

Republican presidential candidate Mitt Romney has advised that he is opposed to the New START Treaty and has not expressed a position on nuclear weapons other than the expectation along with Republican House and Senate members that if President Obama is for it he is likely to be against it.

President Ronald Reagan was the last Republican president with the courage to articulate a vision of a world without nuclear weapons and if it wasn’t for his Star Wars Missile Defense that vision may have been much closer to a reality today.

We stand at a tipping point with our world threatened every moment of every day with annihilation from nuclear war and the steady choking of the planet through climate change. According to the Bulletin of Atomic Scientists and their Doomsday Clock this year the clock moved ahead and it is five minutes to midnight, the figurative hour of humanity’s catastrophic destruction.

Our future great-great-grandchildren are calling to us asking what did you do when the planet was threatened. How will you respond? Your response will help determine their existence.

Dr. Robert Dodge is family physician practicing in Ventura, California.  He serves as a board member of Beyond War www.beyondwar.org and Physicians for Social Responsibility Los Angeles www.psrla.org.  He is co-chairman of Citizens for Peaceful Resolutions www.c-p-r.net.

3 comments for “The Twin Existential Threats”