With tensions again rising in the Persian Gulf, an accident or provocation around the narrow Strait of Hormuz could precipitate a war. In this memo for President Obama, 11 former U.S. intelligence officials urge a U.S.-Iranian system for communications — a “hot line” — in case of crisis.

We write respectfully to call your attention to the clear and present danger of escalation in the Persian Gulf and to suggest ways to lessen that likelihood. There needs to be a reliable way for our Navy to communicate at a sufficiently high level with Iranian naval counterparts. Otherwise, incidents occasioned by accident or provocation can readily escalate in ways neither side intends. 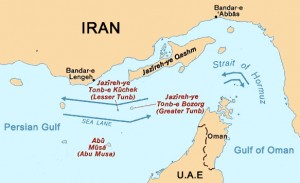 Map of the waterways near the Strait of Hormuz

This is not a new problem; others (notably former Joint Chiefs of Staff Chairman Admiral Mike Mullen) have called attention to it in the past. We do so again because of the sharply increased tensions flowing from terrorist attacks like the one on July 18 in Bulgaria in which five Israeli tourists were killed.

It is not yet known who the suicide bomber was. Yet Israeli Prime Minister Netanyahu immediately blamed Iran and Hezbollah for the attack, a claim that has not been substantiated, and threatened retaliation. Inside Iran, terrorist attacks have claimed the lives of five Iranian scientists over the past five years, with the Iranians blaming Israel.

The recent buildup of warships in the Persian Gulf has added not only to crowding, but also to a hair-trigger, volatile environment.  On July 16, the U.S. Navy announced that a Navy refueling ship out of Bahrain, the Rappahannock, had used “lethal force” against a 50-foot pleasure craft, killing one Indian fisherman and seriously injuring three others.

The Navy said the fishermen had been given ample warning, but the three survivors insisted they had received no warning before being fired upon. And if that fishing boat had been an Iranian naval vessel?

As that recent shoot-up suggests, the waters of the Gulf offer the most likely locale for an incident that could spiral out of control. The navigable part of the Strait of Hormuz is narrow; it is an area where ships collide. In 2007, for example, the U.S. nuclear submarine USS Newport News collided with a Japanese oil tanker in the Strait while the submarine was transiting submerged.

Two years later, the USS Hartford nuclear submarine and the amphibious USS New Orleans collided in the waters between Iran and the Arabian Peninsula while on routine security patrols in that crowded shipping lane. In January 2008, five Iranian boats swarmed three U.S. warships in the Strait of Hormuz.

The skies over that strategic area have also seen inadvertent tragedy. On July 3, 1988, the Aegis guided-missile cruiser USS Vincennes mistakenly shot down an Iranian civilian passenger jetliner, Iran Air Flight 655 over the Strait of Hormuz, killing all 290 passengers. Iran Air Flight 655 was on a scheduled daily flight using established air lanes from Bandar Abbas, Iran, to Dubai, when the Vincennes mistakenly identified it as a fighter aircraft.

The Vincennes had sent a radio warning on the international air distress frequency, but gave incorrect altitude and position information on the plane. Thus, even if the Flight 655 crew were tuned in, they may have thought the warning was directed at some other flight. A U.S. Navy frigate, the USS Sides, reported that Iranian plane was climbing, not diving to attack, at the time of the missile strike.

At a press conference on July 2, 2008, the JCS Chairman, Admiral Mike Mullen, said that military-to-military dialogue could “add to a better understanding” between the U.S. and Iran. As far as we are aware, no such dialogue has been established.

Just before he retired, Admiral Mullen bemoaned the inevitable, and unnecessary, risk stemming from the absence of military-to-military ties: “We haven’t had a connection with Iran since 1979. We are not talking to Iran, so we don’t understand each other. If something happens it’s virtually assured that we won’t get it right, and there will be miscalculation, which would be extremely dangerous in that part of the world.”

The following two modest proposals could go a long way toward avoiding an armed confrontation with Iran, whether accidental or provoked by any who may actually wish to precipitate hostilities involving the U.S. in the area of the Persian Gulf.

1 Establish a direct communications link between U.S. and Iranian naval commanders in the Persian Gulf area and also between top military officials in Washington and Tehran, in order to reduce the danger of accident, miscalculation, or provocation.

A communications link has historically proven its merit during times of high tension between potential enemies. The Cuban missile crisis of 1962 underscored the need for instantaneous communications at senior levels, and a “hot line” between Washington and Moscow was established the following year.

That direct link played a crucial role in preventing the spread of war in the Middle East during the Six-Day War in early June 1967.

Another useful precedent is the “Incidents-at-Sea” agreement between the U.S. and the Soviet Union, signed in Moscow in May 1972. That was another time of considerable tension between the two countries, including several inadvertent naval encounters that could well have escalated. The agreement sharply reduced the likelihood of such incidents.

We would regard with suspicion any who would oppose such common-sense measures to prevent escalation. A number of U.S. commanders in the Persian Gulf have favored such steps in the past, according to press reports. And, as indicated above, Admiral Mullen appealed explicitly for military-to-military dialogue.

The U.S. military’s feasibility analysis regarding an incidents-at-sea agreement is now with the Senate Armed Services Committee. At a bare minimum, such an agreement should be concluded as expeditiously as possible. We strongly urge you to marshal White House pressure behind getting that done.

If this promising initiative is delayed or tabled, we respectfully suggest that you consider ways to use your executive power to implement whatever steps might be possible to establish direct communication channels with appropriate Iranian authorities immediately.

For Veteran Intelligence Professionals for Sanity

Paul Pillar, former National Intelligence Officer for the Near East