Led by Israeli Prime Minister Netanyahu, hard-line critics of Iran were quick to jump to a conclusion blaming its operatives for a bus bombing targeting Israeli tourists in Bulgaria. Some Israeli and Western media even cited a speech by Iran’s President Ahmadinejad as proof, but Nima Shirazi exposed the misleading charge.

A demonization propaganda campaign is now in full swing with regard to the recent tragic terrorist bombing in the coastal Bulgarian town of Burgas that targeted Israeli tourists.

Such propaganda is a matter of life and death and establishes dangerous falsehoods as facts that race around the Internet and the world, forever defining the narrative, obscuring the truth, and perpetuating pervasive mythologiesthat permeate our already skewed discourse on the issues of Iran, Israel, U.S. foreign policy and, now, the Burgas bus bombing. 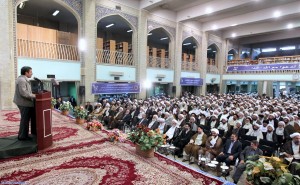 The Times of Israel, the same “news” outfit that was quick to identify former Guantanamo detainee Mehdi Ghezali as the bomber based on half-baked Bulgarian media reports (a claim immediately denied by all intelligence agencies involved in the case) was back at it, this time with a report declaring that Iranian president Mahmoud Ahmadinejad has revealed (and reveled in) Iran’s culpability for the attack in Bulgaria.

The Times opened its piece with what could not be mistaken for anything other than what it presents as a clear statement of fact: “Iran’s President Mahmoud Ahmadinejad gloated publicly on Thursday over the deaths of Israelis in a terror bombing in Bulgaria, and hinted that Iran was responsible for the attack.” Claiming that, just hours after the attack itself, “Ahmadinejad described the attack as ‘a response’ to Israeli ‘blows against Iran,'” the report continues:

“The bitter enemies of the Iranian people and the Islamic Revolution have recruited most of their forces in order to harm us,” Ahmadinejad said in a speech reported by Israel’s Channel 2 TV. “They have indeed succeeded in inflicting blows upon us more than once, but have been rewarded with a far stronger response.”

He added: “The enemy believes it can achieve its aims in a long, persistent struggle against the Iranian people, but in the end it will not. We are working to ensure that.”

Ahmadinejad’s speech was interpreted in Israel as asserting that the Burgas bombing was a revenge attack for the killing of Iranian nuclear scientists, for which Iran has repeatedly blamed Israel.

This report spread like wildfire around the internet, from right-wing sites like The Blaze and Commentary to progressive outlets like Paul Woodward’s War in Context. But it’s a lie.

Ahmadinejad’s speech, delivered in commemoration of World Mosque Day, had absolutely nothing to do with the bus bombing in Bulgaria. The quotes cherry-picked and bizarrely analyzed by the Israeli media have nothing to do with boasting or bragging about the attack.

The speech, typical of Ahmadinejad, states clearly that, in the face of Western aggression and efforts to impose hegemony over Iran and its rights, the Islamic Republic will stand firm and not back down. This is even evident in the English language report on the speech itself, available on Ahmadinejad’s own website.

“I assure the Iranian people that the government will not retreat even one iota from their rights, principles and values against the declining materialistic powers,” Ahmadinejad said, “even if the enemies mobilize their past and future capabilities and get accompanied by certain parties inside the country.”

The key part of the speech twisted and bastardized by the Israeli press actually states that “the main enemies of the Iranian nation and the Islamic Revolution have waged a major battle and mobilized their utmost power and capability but the Iranian government strongly resists against them. The enemy deals a blow to the Iranian nations step by step; but, in return, it receives a stronger, heavier blow.”

The Iranian president is so obviously talking about the campaign to abrogate Iran’s nuclear rights (Ahmadinejad said that “the hegemonic system opposes the Iranian nation only because of the high speed of its progress in various sectors such as industries, science and technology”) and Iran’s steadfastness in the face of economic pressure and ever-mounting sanctions and threats that to allege this has anything to do with Burgas is not only amazingly dishonest and grotesque, but also dangerous.

The critical paragraph of Ahmadinejad’s speech (a small portion of the whole, which mostly praises the importance of mosques as constructive cultural centers of society) can be read below both in the original Farsi along with an alternate translation:

“Dr. Ahmadi Nejad in another section of his remarks (words) mentioning that today the (Iranian) Government is involved in a heavy and all encompassing struggle reminded that: today the main enemies of the people, culture, ideals, the Islamic revolution and the Iranian existence have mobilized all their abilities (powers) to prevent the fast movement towards progress of the Iranian nation, and the (Iranian) Government also with all of its power, day and night and every moment is standing in front of them.

“The enemies with domination over all the centers of economy and power in the world day and night and every moment are acting against the Islamic Republic and the (Iranian) Government also has risen in front of them (standing in front of them, against them) and if they deliver a blow they will receive a blow which usually the blow they receive will be heavier than the blow they have delivered.” (Translation by Ahmad Shirazi)Here is yet another translation of the relevant part of Ahmadinejad’s speech, generously provided by professional translator Mehrdad Shahabi:

“Referring to the fact that the government is today engaged in a heavy full-scale struggle, Dr. Ahmadinejad in another part of his speech pointed out that, ‘Today, the main enemies of the Iranian nation, its culture and ideals, its Islamic Revolution and the nation’s very existence have mobilized all their possibilities to impede the Iranian nation’s swift progress. In response, doing its utmost, the government, has stood up to them round the clock, day and night.

“‘Dominating the world’s economic and power centres, the enemies have been acting against the Islamic Republic round the clock, day and night. The government, for its part, has stood up to them in every step they take. For every blow delivered, they will receive a counter-blow, which is usually heavier than the blow delivered.”

The use of this quote, and the false presentation of it as having anything to do with the Burgas attack, may have set a new low in the warmongering campaign that Israel is waging against Iran.

Later, The Times of Israel retracted its bogus Ahmadinejad “gloating” story and issued a corrective article entitled, “Ahmadinejad was talking about sanctions, not Burgas, in his speech last Thursday, says Persian expert.” The expert cited is Bahman Kalbasi, correspondent for BBC Persian.

On Twitter, Kalbasi confirmed my debunking of the Times article, liking to my own post and writing “Nima at @WideAsleepNima correctly articulates the mistranslation by @TimesofIsrael : #Iran wideasleepinamerica.com/2012/07/the-in”

The retraction explains that while “Ahmadinejad’s speech was widely interpreted in Israel as asserting that the Burgas bombing was a revenge attack for the killing of Iranian nuclear scientists. … Kalbasi said such interpretations reflect a mistranslation, and that the speech contains no word or phrase that indicates Ahmadinejad was talking about the bombing.

“The relevant section of the speech relates to western sanctions on Iran and Iran’s response, he said, rather than to the Burgas bombing as on ostensible response to the killing of Iranian nuclear scientists.”

The article concludes: “He was talking about growing international and economic pressure on Iran, and assuring his constituency that their government will stand up for them and fight back,” said Kalbasi, noting that Thursday’s speech is carried on Ahmadinejad’s website.

← Will Downing St. Memo Recur on Iran?
Romney’s Pentagon Budget Out of Step →