Secretary of State Hillary Clinton’s visit to newly democratic Egypt was met by some protesters throwing tomatoes, but her stop in Israel, which included no overt signs of dissension, may have had more turmoil just below the surface, writes ex-CIA analyst Paul R. Pillar.

There is nothing new, of course, in disconnects between a polite veneer of international diplomacy and significant conflicts of interest between governments. Nor is there anything new in a lack of correlation between happenings on the surface and the extent to which an underlying relationship is cooperative or conflictual.

But on Secretary of State Clinton’s just-completed Middle East trip, the lack of correlation was especially marked. 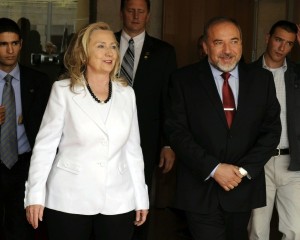 In Egypt, the secretary’s motorcade was pelted with shoes and tomatoes. Although it was not entirely clear what the anger encompassed, the protesters evidently were a combination of Christians wary of anyone having dealings with an Islamist government and some die-hard supporters of the deposed Hosni Mubarak. Clinton responded with aplomb, later expressing as her only regret that the protest was a waste of good tomatoes.

Despite anger in the street, current bilateral frictions between the United States and Egypt do not extend much beyond consequences of the Egyptians’ sharp differences among themselves, making it difficult for any outsider to do business with any one Egyptian element without offending other Egyptians.

There is much commonality of interest between the United States and each of the major Egyptian political elements. President Mohamed Morsi is the product of a free electoral process that was missing from Egypt for decades and that the United States has rightly endorsed and supported.

The military brass, although currently standing in the way of a fully representative democracy, nonetheless stand for other things also important to the United States, including domestic stability and a continued strong U.S.-Egyptian security relationship.

By contrast, when Secretary Clinton was in Israel there were no flying tomatoes or shoes. Also by contrast, the decorum and friendship on the surface masked severe problems in the relationship and serious conflicts of interest.

At the center of the problems, partly because of the pervasive effect on U.S. relations and standing through the region, is the Israeli retention and colonization of occupied territory seized in war.

Regarding democratization in nearby Arab states such as Egypt, Israel has views different from those of the United States, for reasons unique to Israel and that Israel has largely brought on itself through its handling of the Palestinian issue. Israel also is the source of another major regional problem for the United States, turning a long-term issue of Iran’s nuclear activities into a preoccupying crisis by threatening to start a war.

The current Israeli government occasionally has let the conflicts of interest surface in ways that have tested the patience of U.S. leaders and their ability to maintain the decorum. When the Israeli prime minister visited Washington, he presented the spectacle of lecturing the President of the United States at a White House photo op.

When the Vice President of the United States visited Israel, he was insulted by having the Israeli government pick that moment to announce its latest expansion of settlements in the occupied territories.

This time, the Netanyahu government pursued the same objective in ways that would not be seen as an open insult. Over the weekend we learned that Netanyahu’s government has quietly agreed to subsidize the construction of more than 500 new Israeli homes in the West Bank, notwithstanding a promise earlier this year to deny such subsidies.

Despite all the conflicts of interest, it has become de rigueur to exude harmony in U.S.-Israeli relations. Much commentary in Washington treats harmony in this relationship as if it were an end in itself, which it isn’t.

Amid a U.S. election campaign the exuding is all the more de rigueur. Secretary Clinton’s trip to Israel will be followed in a couple of weeks with a visit there by Mitt Romney, and there will be much gauging of whose visit was friendlier.

During the past three-and-a-half years, Hillary Clinton has thrown herself into the job of secretary of state with much energy and dedication. She has well earned a rest, if she wants one, when she leaves the position. She probably especially will welcome no longer needing to bite her diplomatic tongue when the surface of international diplomacy is sharply at odds with the underlying reality.

7 comments for “Dodging Tomatoes and Dissent”