A combination of a right-wing federal Appeals Court in Washington and a disinterested U.S. Supreme Court means GuantÃ¡namo inmates have little hope for justice even if a District Court judge sides with their arguments. That means the right of habeas corpus is effectively dead for detainees, Marjorie Cohn writes at Jurist.

The tragic case of Adnan Farhan Abdul Latif hit a dead end when the U.S. Supreme Court issued an order refusing to hear his case last week. Latif, a Yemeni man, has been imprisoned at Guantanamo Bay since January 2002, after being detained while traveling to seek medical treatment.

Latif had suffered serious head injuries as the result of a car accident in 1994, and the Yemeni government paid for him to receive treatment in Jordan at that time. But his medical problems persisted, and in 1999 Yemen’s Ministry of Public Health recommended that Latif undergo tests, therapy and surgical procedures at his own expense. 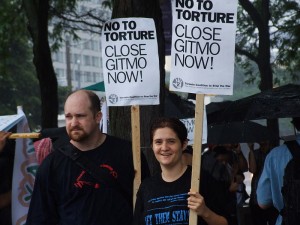 Unable to afford it, Latif said he left Yemen in 2001 with the help of a charitable worker to seek free medical treatment in Pakistan. When he was picked up in Afghanistan, on his way to Pakistan, and transferred to U.S. custody in December 2001, Latif had his medical records with him.

After a kangaroo court proceeding, a Combatant Status Review Tribunal at Guantanamo declared Latif to be an “enemy combatant.” He was not allowed to attend the hearing, nor was he permitted to see the evidence against him. Instead of a lawyer, he was given a “Personal Representative”, a military officer who did not represent Latif’s interests.

Four years ago, the Supreme Court rejected the Bush administration’s argument that the detainees at Guantanamo had no right to contest the legality of their confinement in US courts. In Boumediene v. Bush, the Court upheld the habeas corpus rights of the detainees, saying they must be given “a meaningful opportunity” to challenge their detention.

Latif petitioned a federal district court for a writ of habeas corpus. The Obama administration opposed the petition, relying on information from an interrogation report. Large sections of the report were blacked out, so it is difficult to know exactly what the report says.

But we do know that, according to the report, Latif admitted to being recruited for jihad, receiving weapons training from the Taliban and serving on the front line with other Taliban troops. Latif said his interrogators garbled his words so that their summary bears no relation to what he actually said.

In the U.S. District Court for the District of Columbia, Judge Henry Kennedy granted Latif’s habeas petition, concluding that it could not “credit the information [in the Report] because there is serious question as to whether the [Report] accurately reflects Latif’s words, the incriminating facts in the [Report] are not corroborated, and Latif has presented a plausible alternative story to explain his travel.”

Particularly significant to Judge Kennedy was that the “fundamentals [of Latif’s story] have remained the same.” More than a dozen interrogation summaries and statements contained “[Latif’s] adamant denials of any involvement with al Qaida [sic] or the Taliban; his serious head injury from a car accident in Yemen; his inability to pay for the necessary medical treatment; and his expectation and hope that [the charitable worker] would get him free medical care.”

Judge Kennedy also reasoned that errors in the report support “an inference that poor translation, sloppy note taking . . . [blacked out] . . . or some combination of those factors resulted in an incorrect summary of Latif’s words.” The fact that Latif was found in possession of his medical papers when seized, according to the judge, “corroborat[ed]” Latif’s “plausible” story.

The government appealed the district court ruling to the conservative U.S. Court of Appeals for the District of Columbia Circuit, which reversed the grant of habeas corpus. The appellate court admitted that the interrogation report was “prepared in stressful and chaotic conditions, filtered through interpreters, subject to transcription errors, and heavily redacted [parts blacked out] for national security purposes.”

But for the first time, the DC Circuit held that government reports must be accorded a “presumption of regularity.” That means they will be presumed to be true unless the detainee can rebut that presumption.

Judge Janice Rogers Brown, who wrote the opinion for the two judges in the majority on the three-judge appellate panel, twisted Boumediene’s statement that “innovation” could be used in habeas corpus proceedings into a “presumption of regularity” in government reports. Judge Brown criticized “Boumediene’s airy suppositions.”

The dissenting appellate judge, David S. Tatel, noted that, in practice, the presumption of regularity will compel courts to rubber-stamp government detentions because “it suggest[s] that whatever the government says must be true.” He concluded that the report in Latif’s case was inherently unreliable because “it contain[s] multiple layers of hearsay.” Judge Tatel accused the majority of denying Latif the “meaningful opportunity” to contest the lawfulness of his detention that Boumediene guarantees.

When seven detainees whose petitions had been denied by the DC Circuit, including Latif, took their cases to the Supreme Court, they hoped the high court would do justice. During the Bush administration, the Court had struck down illegal and unjust executive policies. These included the denial of habeas corpus rights to Guantanamo detainees, the refusal to afford due process to U.S. citizens caught in the “war on terror” and the holding of military commissions because they violated the Uniform Code of Military Justice and the Geneva Conventions.

But hope for justice died last week when the Court refused to even consider the propriety of the appellate court’s denial of habeas corpus to those seven detainees. Henceforth, detainees who lose in the DC Circuit cannot expect the Supreme Court to give them relief. Their last stop will be at one of the most right-wing circuits in the country, which overturns or delays all release orders by federal judges if the government objects.

The Supreme Court’s refusal to review the appellate court decisions in these cases has rendered Boumediene a dead letter. Since 2008, two-thirds of detainees who have filed habeas corpus petitions have won at the district court level, yet not one of them has been released by judicial order. Judge Tatel wrote that “it is hard to see what is left of the Supreme Court’s command in Boumediene that habeas review be ‘meaningful.'”

Like many men at Guantanamo, Latif went on a hunger strike to assert the only power he had in the face of utter hopelessness, the power to refuse food. He was force-fed for three months, which, he says, “is like having a dagger shoved down your throat.” As attorney Marc D. Falkoff writes in his chapter about Latif in The United States and Torture: Interrogation, Incarceration, and Abuse, “[t]he United Nations Commission on Human Rights calls this torture.”

Of the 800 men and boys held at Guantanamo since 2002, 169 remain. Of those prisoners, 87 have had their release approved by military review boards established during the Bush administration, and later by the Guantanamo Review Task Force established by President Obama in 2009. Yet they continue to languish in the prison camp.

In her opinion, Judge Brown wrote, “Luckily, this is a shrinking category of cases. The ranks of Guantanamo detainees will not be replenished.” Indeed, Obama has sent only one new prisoner to Guantanamo. His strategy is to assassinate “suspected militants” or people present in “suspicious areas” with drones, obviating the necessity of incarcerating them and dealing with their detention in court.

Marjorie Cohn is a Professor of Law at Thomas Jefferson School of Law and past president of the National Lawyers Guild. She is editor of The United States and Torture: Interrogation, Incarceration, and Abuse, released earlier this year in paperback by NYU Press. http://www.jurist.org/forum/2012/06/marjorie-cohn-latif-scotus.php

← Another Road Not Taken
All for One →

3 comments for “Hope Dies at GuantÃ¡namo”