Facing political pressure from Republicans, the Obama administration has delayed installing a solar-energy system at the White House, perhaps aware of the fate of Jimmy Carter and his solar panels three decades ago, say documentarians Christina Hemauer and Roman Keller.

By Christina Hemauer and Roman Keller

As artists based in Zurich, we first started in 2006 to work on a video and later on a documentary about the former solar installation on the White House. Jimmy Carter had installed the solar panels in June 1979 in the midst of a severe recession during the second oil crisis and some 16 months before the re-election that Carter didn’t win.

The Reagan team simultaneously campaigned with the idea of dismantling the Energy Department, but once in office “only” succeeded in cutting down the renewable energy budget by 90 percent and in taking down the White House solar installation in 1986. [See Consortiumnews.com’s “Reagan’s Road to Climate Perdition.“] 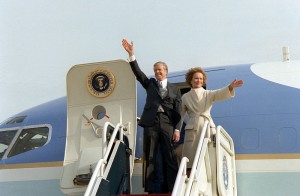 Former President Jimmy Carter and his wife Rosalynn departing Washington after the Inauguration of Ronald Reagan on Jan. 20, 1981.

Thirty-one years after Carter’s installation on Oct. 5, 2010 Secretary of Energy Steven Chu announced: “The White House will lead by example. I’m pleased to announce that by the end of this spring, there will be solar panels that convert sunlight to energy and a solar hot water heater on the roof of the White House.”

By the end of spring 2011, Ramamoorthy Ramesh, director of the Solar Energy Technologies Program at DOE, affirmed: “The Energy Department remains on the path to complete the White House solar demonstration project, in keeping with our commitment, and we look forward to sharing more information — including additional details on the timing of this project — after the competitive procurement process is completed.”

Another year later there is still nothing on the White House to harness the power of the sun. It’s obvious that the Obama administration is holding back this symbolic gesture because of the incessant Republican criticism against Obama’s energy policies in the aftermath of the Solyndra scandal.

If Barak Obama should fail to be re-elected this fall, the idea of solar on the White House might take another long hibernation. What a pity!

While it is totally understandable that the Obama administration prefers not to anger voters by putting more money into solar, it’s also sad to see that this administration is more concerned about maintaining its political image than taking action.

Jimmy Carter is said to have been less diplomatic. House Speaker Thomas P. “Tip” O’Neill once wanted the President to contact some influential members of Congress but was turned down with the words: “Why should I call them? It’s the right thing to do.”

Next to the faltering economy, the gas lines and the Iran hostage crisis, Jimmy Carter’s suboptimal political maneuvering might have cost him the re-election.

Artists are used to looking toward longer time frames than politicians. One of our central concerns is how our work will be remembered. Will our work be preserved in museums because it is considered to be a new idea or a novel formal expression? We’re used to being judged about what we did rather than what we said.

In this sense, Jimmy Carter might have been a better artist than politician. He committed U.S. foreign policy to human rights, left as his legacy the first peace agreement between Israel and an Arab neighbor country, and kissed the Soviet leader Leonid Brezhnev.

From the beginning of his presidency, Carter invested a lot of his political capital on energy efficiency and the development of renewable energies. Even being ridiculed at the time, he managed to put thermal solar panels on the roof of the West Wing.

Today renewables have become the fastest growing energy source of the world. On sunny days, German solar installations produce more power than 20 nuclear plants. The required technologies were developed in the United States in the late 1970s.

That’s why we thought it was important to bring one of the former White House solar panels to the Museum of American History in our documentary “A Road Not Taken.” A second panel we took to the Jimmy Carter Library and Museum where it is permanently on display.

The current administration’s attempt to bring solar back to the White House might end as yet another road not taken but with little chance to get remembered.

Christina Hemauer and Roman Keller are artists based in Zurich, Switzerland, who produced the documentary “The Road Not Taken: The Story of the Jimmy Carter White House Solar Installation.” They can be contacted at info@hemauer.ch and me@romankeller.info.

4 comments for “Another Road Not Taken”