Led by the neocons, a growing chorus of Washington pols and pundits are clamoring for President Obama to “do something” militarily to remove the Assad regime from power in war-torn Syria. But the real-life options remain fraught with risk, says ex-CIA analyst Paul R. Pillar.

International anguish over bloodletting in Syria has come close to the point at which urges to “do something” about the situation there (something more forceful, that is, than supporting Kofi Annan’s diplomacy) may outweigh any sober consideration of whether there is something useful to do.

The grisly events at Houla have provided the most recent boost to the urges. Leaders in Europe, and not just politicians and pundits in the United States, have lately been talking increasingly about external intervention. 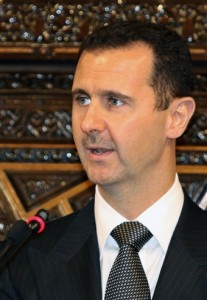 Having political support to do something, or anything, forceful or risky in Syria does not mean that there is indeed something to be done that would have a good chance of either stemming the bloodshed or ushering in a more agreeable regime in Damascus. There still are no good options on Syria.

The same sorts of questions that could be asked months ago remain important and unanswered today. The fact that the Free Syrian Army is not really an army but an unorganized collection of local fighting groups poses a host of uncertainties about the consequences of facilitating the shipment of arms to those groups.

As unsatisfying as it may sound, White House spokesman Jay Carney’s observation that “militarization of the situation in Syria at this point . . . would lead to greater chaos, greater carnage” is probably the best starting point for formulating policy toward that situation.

A recent urging, with a twist, for a substantial arming of Syrian oppositionists comes from Danielle Pletka of the American Enterprise Institute, the twist being that Pletka argues that such a move would not only be good policy but also “good politics for Obama the candidate.”

One is entitled to ask whether this is intended as some kind of setup, laying the groundwork for later accusations that a more forceful turn in Obama’s policies was only a desperation move in the midst of a reelection campaign.

Setting aside such suspicions, Pletka probably is correct that more forceful actions on Syria, by responding to the strengthening urges to do something, would be politically popular at least in the short term, before we saw additional chaos and carnage in Syria. But short-term political advantage would of course be an entirely unjustifiable reason to make such a move.

Pletka’s elaboration of her argument about political advantage reveals how weak the part of her contention is that injecting more arms into Syria would make strategic sense. She says the move ought to appeal to Obama as an “un-Bush” way of “allowing others to fight a war that America wishes won”, presumably a contrast with the Bush way of committing a large American force to fight a long and costly war, as in Iraq.

But the rest of her argument is a continuation of the same patterns of neoconservative thinking that led to Bush’s war. There is the same wishful thinking substituting for careful analysis about consequences, such as in talk about how shipments of arms “may finally give the edge to the opposition” and “coax more significant defections” from the regime’s forces.

There is the same assumption that the United States can stage-manage political change in the Middle East, as in references to how the administration “could work more closely with the Syrian political opposition to develop a blueprint for a transition.”

There is the same assumption that the direction of U.S.-fomented political change always will be monotonically in a direction consistent with American values, as in talk about “the prospect of a U.S.-assisted democratic transition” and about how an arms-injection scheme would somehow “ensure” that moderate forces would take the helm in Syria.

After seeing how false such assumptions turned out to be even with the commitment of large American army, it is a wonder to see them applied to the kind of “un-Bush” intervention being recommended.

Bloody situations such as Syria give rise to humanitarian impulses that tend to be contrasted with cold realpolitik. (Pletka gives a nod to this kind of thinking by asserting that Syria presents a “rare confluence of strategic and moral imperatives.”) We would do well to heed a recent statement about Syria by someone often seen (unfairly) as the dark prince of heartless realpolitik, Henry Kissinger:

“Military intervention, humanitarian or strategic, has two prerequisites: First, a consensus on governance after the overthrow of the status quo is critical. If the objective is confined to deposing a specific ruler, a new civil war could follow in the resulting vacuum, as armed groups contest the succession, and outside countries choose different sides.

“Second, the political objective must be explicit and achievable in a domestically sustainable time period. I doubt that the Syrian issue meets these tests.”

Particularly against the backdrop of some situations, such as Syria or Libya, that have arisen in the Middle East, some people divide policy analysts into those who are willing to do tough things to stand up to despicable, bloody-handed regimes and those who are not willing to do such things.

← The Almost Scoop on Nixon’s ‘Treason’
Can the 1% Help Fight Poverty? →