Exclusive: Wisconsin Gov. Scott Walker, the new rock-star of the Republican Right, rode a wave of corporate money and anti-union sentiment to a recall victory. But his win could wake up progressives to the need for more media outreach to educate citizens on the dangers of unchecked corporate power, writes Robert Parry.

The victory of Wisconsin’s Republican Gov. Scott Walker, beating back a recall effort led by labor unions and liberal activists, underscores not only the Right’s structural advantages in terms of money but the failure of the American Left over the past several decades to counter anti-government and anti-union propaganda.

Right-wing attacks demonizing Big Government and Big Labor have gone substantially uncontested by progressives who shut down or sold off much of their media in the 1970s (after the Vietnam War) and have resisted any serious effort to build a media infrastructure since then. 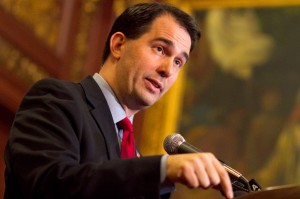 Meanwhile, the Right has invested billions upon billions of dollars over the past three decades in building a vertically integrated media machine that makes its case to Americans over a variety of platforms (cable TV, talk radio, well-funded Internet sites, newspapers, magazines and books). The Left simply has nothing to compare. Wealthy progressives have mostly sat on the sidelines.

This media imbalance including attack groups to go after the occasional mainstream journalist who does dare challenge the Right’s propaganda has prevented average Americans, especially middle-class white men, from understanding the danger they face from unrestrained corporate power.

Yes, the flood of donations from right-wing billionaires buying up TV air time was important, but those messages resonated in large part because they reinforced the propaganda that Americans see and hear every day when they turn on their TVs or listen to their radios.

Americans are conditioned to the message that the “free market” is magical and will solve their problems if only Big Government and Big Labor are kept out of the way. The countervailing message that the greed of Big Business has become a destructive force, leading the United States and the world toward ruin, is a harder sell because it is rarely heard and thus dissonant.

Today, the Left’s most important media voice is MSNBC, which is owned by Comcast and General Electric. Over the past several years, MSNBC has allowed a block of liberal programming in the evenings, but only after failing in earlier efforts to out-Fox Fox News in competition for the larger audience on the Right. That caused MSNBC to seek out the smaller but still profitable audience on the Left.

In other words, unlike Rupert Murdoch’s Fox News, which is committed to a right-wing agenda, MSNBC is just tolerating liberal shows for their ratings, a calculation that could easily change if Comcast and General Electric sense that their other corporate interests are being put at risk. Remember, their other major cable TV property, CNBC, is dominated by correspondents shilling for rich investment bankers.

Because of this national media imbalance, millions of Americans have failed to comprehend the hard truth of their economic situation: Even if there were no recession, corporations simply don’t need as many of us as they used to. The combination of advanced technology and cheap labor abroad has made us expendable as workers (though paradoxically the corporations still want us as consumers).

The contradiction in that reality (that they don’t want to pay us but they do want us to keep spending) is at the heart of America’s economic crisis today.

The Great Recession has made matters worse, reinforcing the conviction among CEOs that their companies can make do with a lot fewer American workers. The recession also gave companies cover for culling their payrolls and announcing their determination to stay “lean” by relying on technology and shifting jobs overseas.

So, even as corporate profits recover, American workers shouldn’t expect companies to hire up. And, the Republican prescription of slashing government payrolls to reduce taxes again mostly for the rich is only going to make the employment crisis worse. The private sector still won’t hire up and there will be more workers competing for the few jobs that are out there.

The good news is that there is an obvious solution to this structural economic problem: The federal government could increase taxes on the rich, i.e., those who have been profiting off cheap foreign labor and advanced technology, and then recycle some of that money back to “expendable” workers via various jobs programs, from repairing the nation’s infrastructure to improving the quality of life.

During some of America’s biggest boom years in the Fifties and Sixties, the top marginal tax rate was 90 and 70 percent, respectively. Now, the top marginal rate is 35 percent on earned income and 15 percent on capital gains. That means, some rich investors are paying tax rates only one-sixth of the top rate under Dwight Eisenhower and less than one-quarter the top rate under John Kennedy.

So, there is no reason to think that higher tax rates on the rich would be “job-killers,” as the Republicans and their media allies say endlessly. Indeed, the Fifties and Sixties were a golden age for American workers, and a more recent experiment with slightly higher tax rates, raised to just below 40 percent under Bill Clinton, was accompanied by the nation’s last major expansion of employment (and a balanced budget).

To protect the overall economy, the government also could impose reasonable regulations on corporations to prevent dangerous excesses and to ensure that workers (and consumers) get a fair shake. It would make sense, too, to strengthen the ability of unions to negotiate for higher pay, rather than marginalize them.

Through a mix of smart government investments and checks on corporate hegemony, a reinvigorated middle class could afford to buy goods and, in turn, make businesses more profitable. The alternative of a tiny slice of super-rich living in unparalleled luxury while most people see their modest dreams crushed is not only a recipe for political disorder but ultimately won’t even be good for the rich.

Thus, the answer for middle-class and working-class people should be obvious: Support a democratized and energized government that intervenes on behalf of the broader society and insists that the spoils of a world market and advanced technology are shared more equitably.

After all, many of those business opportunities created by high-tech and free trade were made possible by the U.S. government investing in things like the space program, the Internet, an interstate highway system and global security.

But the bad news is that Big Money has now run amok. Corporate chieftains are embracing Ayn Randian theories about the morality of inequality.

To back up this extreme ideology, they’ve also financed a political/media industry that deludes average Americans about the nature of the threat they face. It’s an endless process of waving shiny objects before the eyes of the citizenry and it works.

This political/media structure also can inflict punishments. Politicians and media figures who step out of line pay a steep price. After all, the system’s well-compensated propagandists are very skilled at making their opponents look bad and there’s always some personal failing or professional mistake that can be highlighted, exaggerated and turned into the defining element of a target’s life.

Mainstream journalists, who worry that they too could be targeted by the Right, have adapted to this ugly system by joining in it, focusing on the foibles of the target du jour.

In Campaign 2000, when Al Gore was regarded as a threat (mostly because of his environmentalism but also because he saw benefits in wise governance), the Right and the mainstream media transformed him into “Lyin’ Al,” the delusional boaster about his imaginary accomplishments.

The fact that the press including the New York Times and the Washington Post had to make up quotes for Gore to “prove” the point made a certain kind of sense if you understood the deformed political/media structure that now exists in the United States. [For details, see Consortiumnews.com’s “Al Gore vs. the Media” or Neck Deep.]

In Campaign 2000, the American Left didn’t help things when Green Party candidate Ralph Nader campaigned on the slogan, “not a dime’s worth of difference” between Al Gore and George W. Bush. That was arguably the most destructive falsehood in U.S. political history (if one considers the consequences of the Bush presidency and his Supreme Court appointments, think: Citizens United.)

Something similar is underway now with President Barack Obama, whose mild center-left reforms and his rhetorical defense of government as a force for good have infuriated the Right.

A recent Maureen Dowd column in the New York Times summed up the emerging Obama conventional wisdom that seeks to explain his failure to solve the nation’s problems by dissecting Obama’s difficult childhood as a mixed-raced child abandoned by his father and often separated from his mother. [See Consortiumnews.com’s “The ‘Blame Obama’ Syndrome.”]

Obviously, the nation’s problems are far deeper than Obama’s personality flaws. But Dowd’s column fits with the broader pattern of blaming anyone who challenges the status quo (even slightly).

So, here’s the conundrum: The United States and the world are confronted with some of the most dangerous challenges ever, including the existential threat of global warming which could dangerously destabilize the Earth’s nations as it gradually makes the planet uninhabitable.

As a rapacious capitalism ravishes the Earth’s diminishing resources, an ascendant Right also is determined to roll back social progress made over the past century or more. And, the gains from technological progress are being claimed by a smaller and smaller percentage of the world’s population.

There is an urgency to reverse these trends. But that will require convincing citizens, especially in the United States, that government and, yes, higher taxes are vital components of any solution.