The Affordable Care Act faces a key hurdle from the U.S. Supreme Court this month and — if it survives — more attacks from Republicans this fall, with Mitt Romney promising to kill the new law if he’s elected. Yet, despite the reform’s shortcomings, its rejection could mean suffering for millions, says Don Monkerud.

America is beginning one of the most contentious presidential elections in history, and few issues are as fraught with vitriol and downright hatred as national healthcare. Meanwhile, other nations wonder how we can tolerate such poor healthcare at such high prices.

Of the industrialized nations, only Mexico, Turkey and the U.S. lack universal healthcare. The U.S. spends 17 percent of GDP for healthcare, yet one out of six citizens lack insurance coverage, which leads to 45,000 deaths a year, according to Harvard Medical School. 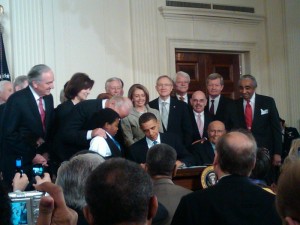 In 2011, most Americans got insurance through their employers, which cost an average of $15,000 per family. According to the Kaiser Family Foundation, this cost doubled since 2001, compared to a 34 percent increase in average wages, and will double again to over $32,000 by 2021.

Let’s compare this with other countries. In 2010, the Organization for Economic Co-operation and Development found that the U.S. spent $7,538 per person on healthcare, 51 percent higher than the second highest spender Norway at $5003. The average among 15 industrialized nations was $3,923.

In deaths from cancer and heart attacks, we’re in the middle; in deaths from all causes, we’re the highest. While spending the most, we do a poorer job than other countries in caring for common cancers.

Americans are dissatisfied with the current healthcare system, and generally support universal healthcare by a 2 to 1 majority, the same margin that supports a government-sponsored single-payer system. Despite this support, powerful lobbies defeat every attempt by Congress to provide decent care for all citizens.

The American Medical Association is a major obstruction, and no wonder. They have so much to lose: The average physician in the U.S. earned $188,000 in 2010, while specialists such as orthopedic surgeons averaged $442,450.

When Congress debated the Affordable Healthcare Act in 2010, eight lobbyists worked every legislator, and the Center for Public Integrity estimates that their salaries amounted to $1.2 billion. Despite opposition from all but one Congressional Republican, the bill passed. A bare majority of citizens supported the bill, while 76 percent of Republicans opposed it.

Passage of the bill accompanied the battering of President Obama as Republicans conjured up images of socialism, government takeovers, and denial of care. In the meantime, the Affordable Healthcare Act, the first such proposal to pass Congress in 60 years, promises to become a battleground in the upcoming presidential election.

While many liberals remain dissatisfied with the bill’s lack of a government insurance option and effective cost controls, the bill includes important reforms. It’s the first such program to extend coverage to almost all Americans, covering 32 million more than previously. Half will be insured by Medicaid, and half by the
individual mandate, the most debated part of the bill, because it forces citizens to buy insurance from for-profit companies.

The bill is far from a left-wing ploy; the ultra-conservative Heritage Foundation proposed it in 1989. Ironically, it’s similar to the plan Mitt Romney adopted when he was Massachusetts governor.

The bill also prevents insurers from denying insurance for preexisting conditions, requires that companies spend up to 85 percent of premiums for medical care, compared to the current 70 percent; emphasizes preventive care; and allows parents to cover children until they’re 26. Unfortunately, the bill doesn’t fully
implement until 2014 so Americans are unable to see the benefits of healthcare reform.

In preventing any legislation favorable to Obama to pass Congress, Republicans exploited ideological fears and petitioned the Supreme Court to declare the healthcare reform bill unconstitutional. While it’s impossible to predict how the conservative court will rule, most legal experts expect the law to be upheld.

Declaring the act illegal would mean Congress doesn’t have the power to find a workable remedy to one of our most vexing national problems. The heart of the opposition revolves around forcing Americans to buy insurance. This grates on many, yet all states require drivers to buy automobile liability insurance, and forbid the sale of certain products, as well as regulating all types of behavior. [See Consortiumnews.com’s “GOP Justices Ignore the Founders.”]

Everyone needs healthcare and requiring its purchase eliminates freeloaders, since the federal government requires hospitals to provide emergency medical care to those who do not have insurance and those costs are then passed on to others. In 2008, uninsured patients cost $43 billion and ratepayers paid for it through higher premiums.

Additionally, citizens are required to pay for police and fire, even though they may not use them. In reality, under the Constitution, there is almost no limit to the regulatory power of Congress, despite conservative objections to loss of freedom.

If the conservatives win Congress and the presidency, American healthcare will be set back for another 60 years. We will lose the few advances of healthcare reform, and can look forward to worse care, higher costs, and more people going without health insurance.

9 comments for “Endangered Benefits of ‘Obama-Care’”