One of Washington’s thriving industries is the business of destroying political opponents (sometimes called “oppo”) while making allies look good (under the rubric of “perception management”). These techniques (and the flood of money) are changing U.S. politics, says Danny Schechter.

In theory, American elections traditionally get going after Labor Day, but, as we can see by the daily overkill media “coverage,” polls and constant reporting about who has raised how many millions to the degree that anyone really knows in the age of Super Pacs that the political horses for the 2012 are off and running.

Lots of the “analysis” seems absurd on its face, as everyone who follows politics knows it’s much too early to spot key trends. The race will tighten with what happens in October crucial. Example: the recent survey that found “cell phone users prefer Obama; landline users like Romney.” 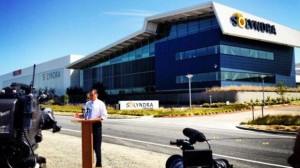 All of this reflects the obsession the press and its senior wise men have on reporting domestic politics over all other issues. They are like sports fanatics in this respect.

The candidates have been in motion for years. It‘s known as the “permanent campaign,” an idea attributed to one of Jimmy Carters’s advisers, Pat Cadell, who said in 1979 that just because you have been elected doesn’t mean you stop campaigning, He wrote in his “Initial Working Paper on Political Strategy,” “it is my thesis governing with public approval requires a continuing political campaign.”

Journalist Sidney Blumental, before he joined the Clinton White House, wrote The Permanent Campaign in 1980, revealing that political parties were dead and had been replaced by political consultants and other campaign professionals.  (Disclosure: I helped get the book published by Beacon Press.)

In other words, politics had changed fundamentally: the old-style bosses were out and a new style media-driven system was in. Politics had also become a business with a whole retinue of advertising specialists, market researchers and pollsters.

Today, political journalist Joe Hagen labels this new army of experts for hire a “presidential electoral complex” almost on the same scale as the military industrial complex. Their advice does not come cheap, with the tail today wagging the dog.

Any serious candidate hires his team and then has to raise millions to pay for it. When politics spawned a profession, the big money that’s transformed politics no longer went just to candidates but to the industry around them.

They also developed a stake in the fostering polarization and continuing crisis so that their counsel will be solicited more often. Increasingly political campaigns were run like military commands with centralized top-down direction, defensive and offensive strategies and tactics as well as psychological warfare. The campaign gurus are well schooled in the techniques of perception management.

This industry is bi-partisan with hired guns always shopping for the best deal irrespective of party. One-time dirty trickster Roger Stone who worked first for Richard Nixon ended up advising everyone from Al Shapton to Donald Trump, to Libertarian Gary Johnson.

Some of these advisers step over the legal line like GOP operative Alan Raymond but few get caught. The New York Times reported In New Hampshire’s hotly contested 2002 Senate race, Democratic get-out-the-vote phone banks were jammed with incoming calls on Election Day. The Republican, John Sununu, won re-election by under 20,000 votes, and Allen Raymond, a Republican Party operative, went to jail for his role in the jamming.

Raymond has now written a book about his experiences, How to Rig an Election: Confessions of a Republican Operative. In it, he paints a picture of the corruption of modern politics that should leave no doubt about the creativity and cynicism of operatives like Raymond or the need for tough new election-reform legislation.

Wikipedia had two other examples of the focus on permanent campaigns:

“A famous example that illustrates just how strongly this mind-set has come to influence politics was during the Clinton Administration when pollster Dick Morris asked voters to help decide where Bill Clinton would go on vacation.

“In the words of columnist Joe Klein, ‘The pressure to “win” the daily news cycle to control the news has overwhelmed the more reflective, statesmanlike aspects of the office.’ (After getting caught in a sex scandal, Morris was fired by Clinton and later resurfaced as a pundit at Fox News.)

“Scott McClellan, former White House Press Secretary for U.S. President George W. Bush, wrote in his 2008 memoir What Happened: Inside the Bush White House and Washington’s Culture of Deception that the Bush White House suffered from a ‘permanent campaign’ mentality, and that policy decisions were inextricably interwoven with politics.”

Many of the press secretaries and campaign managers work hard to contain mistakes. The bookshelves are filled with advice about how to do that. This is from an email promoting interviews with a campaign expert turned author:

“Every word and action on the campaign trail from a televised debate to a town meeting, to an innocent question from a voter to a pointed question from the media … all of these daily events call for immediate, strategic communication.

“Any blunder should be a wake-up call: communication has power. But as with any form of power, it needs to be harnessed effectively or it can all too often backfire.

“This year’s primaries were riddled with missteps and over-reaching. As the focus shifts from primaries to the general elections, Romney will have to walk the line between connecting to the audience and pandering. On the other hand, President Obama will be less under scrutiny for potential gaffes, but more for his inattention to issues that are brewing, followed by a dramatic game-changing address.

“‘However, this can all change in a split-second, as proven by the undeniable power of word choice,’ comments Helio Fred Garcia, President of the crisis management firm Logos Consulting Group and the Executive Director of the Logos Institute for Crisis Management & Executive Leadership.”

Garcia, who teaches now at NYU, discusses strategies that might be useful in a new book on the Power of Communication, or is it manipulation:

“– Leaders are judged on the fulfillment of expectations. Leaders must resist saying what merely sounds good in the moment and creating a say-do gap.

“– The only reason for communication is to change something – to influence the way audiences think and feel. Before you communicate, know what it is you want to change.

“– Facts do not speak for themselves. If we speak only facts, the audience will either not pay attention to those facts or will provide their own context to make sense of the facts, which could trigger a negative frame.

“– Communication is a continuation of business by other means. You need to engage your audience to enhance your position, thereby improving your competitive advantage.

“–Leaders must conquer the first mover advantage – a maneuver that prevents critics and adversaries from framing the situation. This has become increasingly more important in today’s world of social media.”

This same techniques are also used to sell war, as Mother Jones reported: “As long as the United States appears to be on the move against foreign adversaries, the question of whether any action is actually taken becomes of secondary interest. As Blumenthal suggested two decades ago, results and concrete proposals are less important than perception and image.”

Even as Blumenthal was partial to Hillary Clinton, who hired him for her unsuccessful primary campaign in 2008, The Economist noted that his description of a permanent campaign soon became President Obama’s prescription:

“Mr. Obama is currently deploying the formidable resources he built up during his campaign, including contact details for 10m donors, supporters and volunteers, to sell his policies. David Plouffe, the man who managed Mr. Obama’s presidential campaign, has sent millions of e-mails to encourage them to support the White House’s agenda.

“One of them contains as good a definition of the permanent campaign as any: ‘In the next few weeks we’ll be asking you to do some of the same things we asked of you during the campaign, talking directly to people in your communities about the president’s ideas for long-term prosperity.’ “Another, which includes a video of the president, asks supporters to put pressure on their congressman to pass Mr. Obama’s budget, by calling his or her office and reciting a little pro-Obama speech.”

The Republicans have learned these lessons too and now have more money than Democrats to invest in them. Politics is now a growing industry with money and politics more joined at the hip than ever and an interest in keeping the big money flowing into its bank account.