Religious fundamentalists object to same-sex marriage as a violation of Biblical standards. But the actual Biblical marriage standards treat women as chattel and let men have multiple wives, along with concubines and sex-slaves, an inconvenient truth that Rev. Howard Bess notes.

We all have in our mind’s eye the classic image of a preacher raising the Bible in hand and declaring that something is true because it is written in the Bible, the unchallengeable word of God. And, it is not just preachers. Lay people often spout the same attitude.

When commenting on some public issue, devout believers frequently write letters to the editor expressing their confidence in the Bible and its prescription for how that issue must be understood. If it is in the Bible, it must be true. 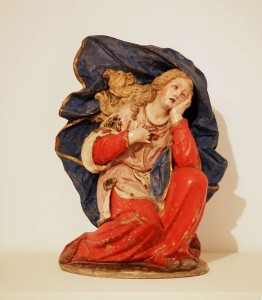 A sculpture of Mary Magdalene by an unknown Portuguese artists. (Photo credit: Alvesgaspar)

Yet, over the centuries, this attitude has led to advocacy of slavery, segregation of the races, subordination of women and corporal punishment for children. It was only when these Biblical teachings were set aside that justice prevailed.

The latest such challenge to Biblical fundamentalism is the debate about same-sex marriage.  Those who continue to insist on Biblical standards say the Bible should be the final word on who should marry and how.

Many of those Biblical passages are found in the book of Leviticus, which prescribed religious practices of the ancient Israelites dating back several centuries before the birth of Christ. In Leviticus, the place of women and the institution of marriage is set out as a part of the property codes.

Women were property, and men were owners of women. Indeed, a man could own as many women as he could afford. Polygamy was the standard, not monogamy.

Men owned women in three categories: they owned wives; they owned concubines; and they owned slaves. All were available to the owner for his sexual use. Most of the women involved were little more than breeding stock. These standards were prevalent all over the Middle East and reflect Mesopotamian and Babylonian traditions.

Over the ensuing centuries, custom changed. While polygamy was allowed and was common, cultural pressures and standards evolved toward monogamy. One standard did not change, however. Women in Jesus’s day were still seen as property. Marriages were still arranged. A woman had no voice in acquiring a husband. A young woman was provided for marriage for what was deemed the best interests of her father.

During the times of Jesus, the life of many women in a poverty economy was precarious. A man could divorce a woman by declaring his freedom from her. The worst scenario for a woman was to have no owner at all.

Mary Magdalene and other so-called prostitutes who hung around Jesus were not prostitutes in a modern sense. They were vulnerable women who had no owner. Evidently Jesus accepted them and provided them with a level of protection and security. One of the criticisms of Jesus was that he associated with prostitutes.

To his credit, the Apostle Paul declared that in Christ there was no longer slave or free, male or female. In spite of the acceptance by Jesus and the declaration of Paul, the early church embraced and perpetuated patriarchal dominance and female submission.

The Leviticus standard of male ownership of wives continued in most of Christianity until the 20th Century. It now seems incredible that women in the United States did not have the vote until the 19th Amendment was adopted in 1920.

So, I scratch my head when I hear someone declare that we need to return to Biblical standards for marriage.

Around the world and within the United States, the understandings of marriage and marriage practices are hugely diverse. In that diversity, a new question has been inserted in the public discussion. Should two persons of the same sex be allowed to marry?

It is a subject that is never addressed in the Bible. It is a modern question that has evolved over the past 50 years. Because the Bible is a collection of ancient writings, I would not expect any of these writings to address a question that is so recent.

Today’s typical marriage between a man and a woman is clearly outside Biblical standards. Women are as active in choosing a mate as are men. Arranged marriages are no longer the norm. The marriage relationship is seen as a partnership, not an owner/client arrangement. Most Americans, whether religious or not, have happily rejected Biblical marriage.

But is there no standard for marriage that can be embraced in our modern world? I suspect that diversity of understandings eventually will win the day.

The need to formalize the attractions that we have for a loving companion will not go away. I like the simple formula that Darlene and I embraced. Before a small group of witnesses, we stood before a minister and spoke words to one another.

First, I said “I Howard take you Darlene to be my wife, to have and to hold from this day forward, for better for worse, for richer for poorer, in sickness and in health so long as we both shall live. To this I give you my promise.” Darlene responded by making the same promise to me. Thus, we were married.

14 comments for “The Bible’s Vile Standards of Marriage”