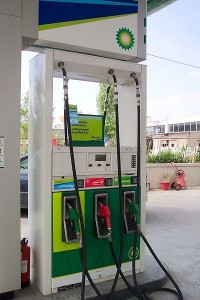 In other words, when compared to four years ago, the Obama administration has not presided over a dramatic increase in gasoline prices as Romney, the presumptive GOP presidential nominee, has suggested. Indeed, there has been a drop from where prices were under Bush in summer 2008.

What a chart of the average gas prices does show, however, is that a far bigger factor in gasoline prices is the strength of the world economy. In May and July 2008, global business was still churning along facing mounting problems but with few foreseeing the catastrophe just over the horizon.

After the Wall Street crash of September 2008, economic growth fell off a cliff and so did gasoline prices. By year’s end, gas prices were down to about $1.61 a gallon. From there, they began a slow climb back along with the world’s economy.

Gas prices also have reflected international tensions especially in the oil-rich Middle East. For instance, Israel’s saber-rattling over Iran’s nuclear program earlier this year contributed to a spike in global oil prices and thus what Americans paid at the pump. As those war fears have receded in recent weeks, so have gas prices, down from about $3.87 a gallon to today’s $3.68.

Nevertheless, Romney still brings up gasoline prices in his stump speeches, arguing that President Obama hasn’t done enough to keep prices low. However, if that’s true of Obama, it was also true of George W. Bush on Memorial Day 2008.