By definition, “terrorism” applies to attacks on civilians for political ends. But the U.S. government has revised the term to cover any attack on Americans, including soldiers fighting anywhere in the world, a misuse of the concept that is hampering a deal to free a U.S. POW, writes ex-CIA analyst Paul R. Pillar.

The only current American prisoner of war, Sergeant Bowe Bergdahl, remains in captivity largely because of the mistaken equating of war fighting with counterterrorism. That false equation has contributed to the suffering of many other Americans in uniform and their loved ones.

It lent believability to the Bush administration’s rationale to launch the Iraq War, and it has underlain continuation of the Afghanistan War for a decade after Operation Enduring Freedom achieved its immediate counterterrorist objectives. The hardship of Sergeant Bergdahl and his family simply adds to that toll. 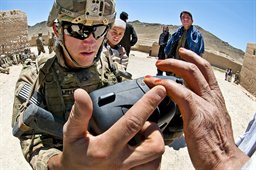 The exact circumstances of Bergdahl’s capture in Paktika Province in Afghanistan in June 2009 are somewhat in doubt, but not in doubt is that he was a combat soldier in a military unit conducting counterinsurgency operations. His capture was not some block-the-street-with-a-car terrorist kidnapping in a city. His captors were insurgents against whom NATO is waging its counterinsurgency campaign.

Secret talks reportedly have pointed to a possible deal under which Bergdahl would be released in return for transferring five Taliban prisoners now at Guantanamo to the custody of the government of Qatar.

Such a deal would have multiple advantages for the United States. It would free Bergdahl. It would help build mutual trust with the Taliban and thereby aid the negotiation of further agreements, which are essential if Afghanistan ever is to have even a modicum of stability. And it would mean five fewer Guantanamo prisoners the United States would have to find a way of disposing of.

The talks have snagged over the conditions under which the Taliban prisoners would be held in Qatar. The Obama administration evidently is taking a hard line to ensure that the Taliban involved do not return to militant activity. It is almost certainly taking that hard line not because of whatever difference five guys from Guantanamo could make but instead because of the reception any such deal would get back in the United States.

That reception would be based on a loose and unbounded use of the term “terrorist.” It would be based on the notion that continued counterinsurgency in Afghanistan is somehow safeguarding Americans from terrorism, whereas it instead has become a nation-building effort.

It would be based on the tendency to label the Afghan Taliban as terrorists, even though they are not an international terrorist group and instead are interested in the distribution of power in Afghanistan. Because of such confusion, the kind of deal that has been discussed mistakenly would be seen as violating the longstanding U.S. policy of not making concessions to terrorists.

That policy has been observed fairly consistently (except in the Iran-Contra affair, which is remembered as ignominy). The policy has a sound basis in not encouraging more terrorist kidnappings. But the principle doesn’t really apply to the military foe in Afghanistan, the Taliban, who do not have some wider terrorist agenda and have no interest in taking captives except insofar as it might help to get foreign forces out of Afghanistan.

With these conflations, Democrats and Republicans alike, anxious to maintain tough antiterrorist credentials, are poised to denounce any deal that contains even a whiff of unfettered freedom for prisoners now at Guantanamo. The U.S. election campaign only worsens the situation. Mitt Romney has opposed the proposed transfer, saying “we do not negotiate with terrorists.”

Amid the politicking and the conceptual and terminological confusion, Sergeant Bergdahl remains indefinitely in captivity.

A postscript for those who are guided by asking themselves, “What would the Israelis do?”: We should recall that last year the Israeli government released 1,027 Palestinian prisoners, many of whom the Israelis very much consider terrorists, in return for the release by Hamas of a single Israeli soldier, Sergeant Gilad Shalit.

← Mitt Romney, the Bully
How the US Press Lost Its Way →