From the Archive: The urgent question facing the advanced capitalistic societies of Europe and the United States is: can “free markets” still meet the people’s needs or will those needs be sacrificed to the market’s demand for “austerity” — and if so, what does that mean for democracy — as Robert Parry asked in 2009.

For all the laid-off “Joe the Plumbers” who share the Right’s fury about the “class warfare” of imposing higher taxes on millionaires, there is this hard truth: the rich don’t need as many of you as they once did and taxing the rich may be the only way to make the economic system work for you.

Indeed, the surplus labor of everyone from factory workers to bookkeepers is fast becoming the biggest structural problem facing U.S. society. Even an economic “recovery” is unlikely to put millions of unemployed Americans back to work, at least in any meaningful way. 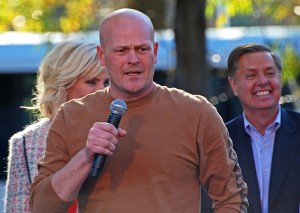 Joe Wurzelbacher, who became famous during Campaign 2008 as "Joe the Plumber." He is now a candidate for Congress in Ohio. (Photo credit: Rona Proudfoot)

That’s because in today’s brave new world of high technology and global commerce, many blue-collar and white-collar jobs can be done more cheaply through computerized automation or by low-cost overseas labor than by American middle-class workers regardless of how much retraining they get.

So, whenever the current recession ends, many Americans who lost their jobs or had to take severe pay cuts are not likely to make up lost ground. Unemployment and under-employment are almost certain to stay high, and those lucky enough to have jobs will have to work harder, faster and longer than before.

Already, most of us scramble to make ends meet, with fewer protections in the work place as unions shrink, with the 40-hour work week disappearing for many, with cell phone and e-mails putting us on call virtually 24/7, and with retirements postponed sometimes indefinitely.

This era’s great irony may be that those of us who grew up watching “The Jetsons” or similar representations of the future didn’t see this bleak future coming. We thought technological progress was going to mean more free time for the human race to play with the kids, to read a book, to travel or to just take it easy.

Instead, technology has contributed to making our lives more slavish and more brutish, especially when job loss is combined with lost health benefits and endless pressure from bill collectors.

Yet, while the middle- and working-classes have seen the American dream recede, the upper stratum of the super rich have watched the benefits of the high-tech global economy flow disproportionately into their stock portfolios and trust funds, creating wealth disparities not seen in the United States since the age of the robber barons.

The tiny fraction at the top the richest 0.01 percent has fattened its collective income by 400 percent, adjusted for inflation, over the past two decades. While this trend was accelerating from 1980 through 2008, the Republican-dominated federal government aided the wealth concentration by cutting income tax rates for the wealthy.

Prior to Ronald Reagan’s presidency, the top marginal tax rate (the percentage that the richest Americans paid on their top tranche of income) was about 70 percent. Reagan took it down into the 20s, and when George H.W. Bush left office in 1993, the marginal rate was at 31 percent with the U.S. budget deficit exploding. To get the deficit under control, President Bill Clinton and the Democratic-controlled Congress took the politically dangerous step of raising the top marginal rate to 39.6 percent, a move that contributed to the Republican congressional takeover in 1994.

Still, the Clinton tax hike helped get the federal budget back into balance and led to a projected surplus so large that policymakers fretted about the complications that might result from the U.S. debt being completely paid off. However, when George W. Bush took power in 2001, he immediately resumed the Reagan-esque push to reduce taxes, especially on the rich.

Under Bush-43, the top marginal rate on income was cut to 38.6 percent and then to 35 percent (and to 15 percent on many capital gains), contributing to another record surge in the federal deficit. By the time Bush left office in 2009, the U.S. government was hurtling toward a $1.2 trillion deficit and the Wall Street financial bubble inflated in part because of huge bonuses and other compensation had burst.

Yet, President Barack Obama and the congressional Democrats feared a replay of Election 1994, so they passed a $787 billion stimulus package and implemented costly bailouts for the Wall Street banks without seeking any immediate tax increase. The result has been a further worsening of the federal deficit and the Republicans accusing the Democrats of fiscal irresponsibility.

Any discussion of raising taxes on the rich like the House plan to apply a surtax on the wealthy to help pay for health-care reform brings howls of protest from protectors of the elites. The Washington Post’s neoconservative editorial page denounced the surtax as a case of “soak-the-rich.”

However, even the Post’s editors acknowledged that “a serious case [could] be made that the U.S. income tax system should be more progressive. The average rate paid by the top 1 percent of households shrank from 33 percent in 1986 to about 23 percent in 2006. At the same time, the share of adjusted gross income claimed by that highest-earning sliver of American society doubled, from 11 percent to 22 percent.”

Beyond the predictable defenders of privilege, however, many average Americans still support Reagan-esque tax cuts even when those policies have amounted to “class warfare” against the middle- and working-classes as well as future generations who are getting stuck with the bills.

This is where “Joe the Plumber,” a mid-30-ish Ohio man named Joe Wurzelbacher, comes in. Though Wurzelbacher wasn’t even a licensed plumber in 2008, he became Sen. John McCain’s symbol of an American everyman, someone whom the 72-year-old McCain called “my role model.”

In the closing days of Campaign 2008, Wurzelbacher launched his strange rise to national stardom by chatting along a rope line with Barack Obama about his tax proposals, specifically Obama’s plan to lower taxes on middle-class Americans and raise them on people earning more than $250,000.

Wurzelbacher said he was considering buying his boss’ company, which he thought might make slightly more than $250,000 and thus might see a rise in taxes under Obama’s plan. Obama responded by noting that any tax increase in that case would be slight and arguing that his tax plan would help America’s embattled middle class because it would “spread the wealth.” (Later, Obama noted that the vast majority of small businesses don’t clear $250,000 and almost no plumbers do.)

Nothing in the Obama-Wurzelbacher exchange was very remarkable. In effect, Obama was reiterating the century-old case for a progressive income tax that assesses higher rates on the well-to-do than on those with modest incomes. It was a concept famously advocated by McCain’s earlier Republican role model, President Theodore Roosevelt, who in his New Nationalism speech of 1910 sounded far more radical than Barack Obama.

“The really big fortune, the swollen fortune, by the mere fact of its size, acquires qualities which differentiate it in kind as well as in degree from what is possessed by men of relatively small means,” Roosevelt said. “Therefore, I believe in a graduated income tax on big fortunes, and in another tax which is far more easily collected and far more effective, a graduated inheritance tax on big fortunes, properly safeguarded against evasion, and increasing rapidly in amount with the size of the estate.”

However, McCain who apparently had swapped his old role model (Teddy Roosevelt) for his new one (Joe Wurzelbacher) accused Obama of “socialism” because of Obama’s support for rolling back tax cuts for the rich.

McCain’s campaign began labeling Obama the “redistributionist-in-chief,” a charge that the Democrats finessed during the final days of the campaign but appear to still fear. The Obama administration shied away from seeking outright repeal of Bush’s tax cuts, instead favoring letting some of them just lapse at the end of 2010 (although even that didn’t happen when Obama agreed to extend all the tax cuts through 2012 in exchange for Republican votes on unemployment insurance and some economic stimulus).

That reluctance to tackle the issue of tax increases and Obama’s practical political decision during Campaign 2008 not to aggressively defend his “spread the wealth” idea meant that the argument about the need for a greater government role in diverting some wealth from the top downward has been deferred.

However, it may be the most important debate for the future of the United States and the health of the American Republic. If the government doesn’t intervene through its taxing authority to redistribute some wealth that now is concentrating among the ultra-rich, programs aimed at protecting the environment, improving education, upgrading the nation’s infrastructure and providing better health care likely will fail.

The American public already is resisting the idea of expanding the federal debt, which translates into passing on the bills to future generations. Obama also has promised not to raise taxes on hard-pressed, middle-income families. The only other choices are to delay urgent action on the environment, education, infrastructure and health care or to raise tax rates on the rich, the likes of those Goldman Sachs employees who after the bank benefited from federal bailouts expected $900,000 in average compensation in 2009.

However, beyond the populist outrage over the size of Wall Street bonuses and other excesses of the super-rich is the simple logic that the federal government is the only entity big enough and the tax structure the only means powerful enough to divert some of the wealth at the top downward to pay for needed programs and to create needed jobs.

Government spending also is the only practical way to redistribute the extraordinary wealth created by technological productivity and global trade so those twin developments can benefit the broader population and keep the economic wheels spinning. This spending could focus on pressing needs, like renewable energy, public transportation, improved education and accessible health care. But of equal importance, it could provide today’s “surplus workers” with meaningful work so they can pay their bills and support their families.

A more equitable distribution of wealth could benefit the Republic, too, since politicians might be less enthralled to big contributors and big business. As Justice Louis D. Brandeis noted more than 60 years ago, “we can have democracy in this country, or we can have great wealth concentrated in the hands of a few, but we can’t have both.”

But first the American people will have to decisively reject another famous quote, Ronald Reagan’s paradigm that “government is not the solution to our problem; government is the problem.”

The public will have to recognize that sometimes the government can be a necessary part of the solution.

[To read more of Robert Parry’s writings, you can now order his last two books, Secrecy & Privilege andNeck Deep, at the discount price of only $16 for both. For details on the special offer, click here.]

2 comments for “To Save the Republic, Tax the Rich?”