Exclusive: If Mitt Romney wins in November, the neocons have made clear they will reclaim full control of U.S. foreign policy and reverse President Obama’s few halting steps toward peace. The neocons even want to move past George W. Bush’s “global war on terror” to a “war with political Islamism,” reports Robert Parry.

Like George W. Bush, Mitt Romney has responded to his lack of foreign policy experience by surrounding himself with clever neoconservatives who are now looking forward to expanding Bush’s “global war on terror” into what neocon ideologue William Kristol calls a U.S. “war with political Islamism.”

In a Washington Post op-ed on Thursday, Kristol dismissed President Barack Obama’s phased military withdrawal from Afghanistan and his statement that “this time of war began in Afghanistan, and this is where it will end” as foolish wishful thinking. 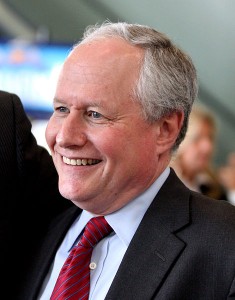 “It would be wonderful if Obama’s view of 9/11 and its implications were correct,” Kristol wrote. “But if it’s not going to be true that Afghanistan is where ‘this time of war … will end’, even if Afghanistan is pacified and we’re no longer fighting there, then the American people should know that.”

What the American people should know, in Kristol’s view, is that a post-Obama administration presumably headed by Republican Mitt Romney and staffed by neocon hawks will undertake a grander “war with political Islamism,” a conflict whose full dimensions even “war president” George W. Bush shrank from.

“This isn’t a pleasant reality, and even the Bush administration wasn’t quite ready to confront it,” Kristol wrote. “But President George W. Bush did capture the truth that we are engaged in, and had no choice but to engage in, a bigger war, a ‘global war on terror,’ of which Afghanistan was only one front.

“There are, of course, problems with ‘global war on terror’ as a phrase and an organizing principle. But it does capture what we might call the ‘big’ view of 9/11 and its implications.”

As part of an even “bigger” view of 9/11, Kristol called for engaging in a broader conflict, ranging “from Pakistan in the east to Tunisia in the west, and most visibly now in places such as Iran and Yemen and Somalia.”

In other words, Kristol and the neocons expect a President Romney to let them refocus the United States onto a “war” not simply against al-Qaeda and its affiliates but against nations where “political Islamism” gains power, which could include Egypt, Turkey, Saudi Arabia and many other Muslim countries.

One might as well say the United States will be at war with the Muslim world, though Kristol hastily added that this “war with political Islamism” does not always have to involve open warfare.

He wrote: “This doesn’t mean we need to be deploying troops and fighting ground wars all around the globe. [But] unfortunately, the war in which we are engaged won’t end with peace in, or withdrawal from, Afghanistan.”

Most political analysts say the November elections will turn on the economy with foreign policy a second-tier issue. In addition, many progressives have denounced Obama and his more targeted approach of relying on drone strikes to kill alleged terrorists as unacceptable, with some on the Left vowing not to support his reelection.

But it shouldn’t be missed that a President Romney would reinstall the neocons, including many who worked for George W. Bush and Dick Cheney, at the levers of American power. Indeed, Romney’s foreign policy “white paper” was largely drafted by neocons. Even the name, “An American Century,” was an homage to the neocon manifesto of the 1990s, “Project for a New American Century.”

Romney’s foreign policy also would restore George W. Bush’s “with us or against us” approach to the world except that Romney, like Kristol, advocates even a more confrontational style, essentially a new Cold War against “rogue nations,” a revised “axis of evil.”

“A special problem is posed by the rogue nations of the world: Iran, North Korea, Venezuela, and Cuba,” Romney’s white paper declares. “Their interests and values are diametrically opposed to our own and they threaten international peace and security in numerous ways, including, as in the case of North Korea and Iran, by seeking nuclear weapons, or by harboring criminal networks, exporting weapons, and sponsoring terrorists.

“Mitt Romney would work to protect and advance America’s interests by employing all the instruments of national power at the president’s disposal. He will defend our country, defend our allies, and restore American leadership around the world. It is only American power, conceived in the broadest terms, that can provide the foundation of an international system that ensures the security and prosperity of the United States and our friends and allies.

“A Romney foreign policy will proceed with clarity and resolve. The United States will clearly enunciate its interests and values. Our friends and allies will not have doubts about where we stand and what we will do to safeguard our interests and theirs; neither will our rivals, competitors, and adversaries.

“The United States will apply the full spectrum of hard and soft power to influence events before they erupt into conflict. In defending America’s national interest in a world of danger, the United States should always retain a powerful military capacity to defend itself and its allies.”

The Romney “white paper” also treats any recognition of past American errors as unacceptable “apologizing” and calls any notion of seeking multilateral consensus on a problem as an admission of weakness.

“A perspective has been gaining currency, including within high councils of the Obama administration, that regards that United States as a power in decline. And not only is the United States regarded as in decline, but that decline is seen as both inexorable and a condition that can and should be managed for the global good rather than reversed.

“Adherents of this view argue that America no longer possesses the resources or the moral authority to play a leadership role in the world. They contend that the United States should not try to lead because we will only succeed in exhausting ourselves and spreading thin our limited resources.

“They counsel America to step aside, allow other powers to rise, and pursue policies that will ‘manage’ the relative change in our national fortunes. They recoil from the idea of American Exceptionalism, the idea that an America founded on the universal principles of human liberty and human dignity has a unique history and a special role to play in world affairs.

“They do not see an international system undergirded by American values of economic and political freedom as necessarily superior to a world system organized by multilateral organizations like the United Nations. Indeed, they see the United Nations as an instrument that can rein in and temper what they regard as the ill-considered overreaching of the United States.

“This view of America in decline, and America as a potentially malign force, has percolated far and wide. It is intimately related to the torrent of criticism, unprecedented for an American president, that Barack Obama has directed at his own country.

“Among the ‘sins’ for which he has repented in our collective name are American arrogance, dismissiveness, and derision; for dictating solutions, for acting unilaterally, for acting without regard for others; for treating other countries as mere proxies, for unjustly interfering in the internal affairs of other nations, for committing torture, for fueling anti-Islamic sentiments, for dragging our feet in combating global warming, and for selectively promoting democracy.

“The sum total of President Obama’s rhetorical efforts has been a form of unilateral disarmament in the diplomatic and moral sphere. A President who is so troubled by America’s past cannot lead us into the future. Mitt Romney believes in restoring the sinews of American power.”

Hawks in the Middle East

As for the Middle East, Romney’s team advocates unquestioned support for Israel both regarding its treatment of the Palestinians and toward Iran:

“Israel is the United States’ closest ally in the Middle East and a beacon of democracy and freedom in the region. The tumult in the Middle East has heightened Israel’s security problems. Indeed, this is an especially dangerous moment for the Jewish state.

“To ensure Israel’s security, Mitt Romney will work closely with Israel to maintain its strategic military edge. The United States must forcefully resist the emergence of anti-Israel policies in Turkey and Egypt, and work to make clear that their interests are not served by isolating Israel.

“With regard to the Israeli-Palestinian conflict, Romney’s policy will differ sharply from President Obama’s. President Obama and his administration have badly misunderstood the dynamics of the region. Instead of fostering stability and security, they have diminished U.S. authority and painted both Israel and ourselves into a corner.

“President Obama for too long has been in the grip of several illusions. One is that the Israeli-Palestinian dispute is the central problem in the region. This has been disproved repeatedly by events, most recently and most dramatically by the eruption of the Arab Spring.

“But it nonetheless led the administration to believe that distancing the United States from Israel was a smart move that would earn us credits in the Arab world and somehow bring peace closer. The record proves otherwise. The key to negotiating a lasting peace is an Israel that knows it will be secure. …

“[Under President Romney] the United States will reduce assistance to the Palestinians if they continue to pursue United Nations recognition or form a unity government that includes Hamas, a terrorist group dedicated to Israel’s destruction.

“The United States needs a president who will not be a fair-weather friend of Israel. The United States must work as a country to resist the worldwide campaign to delegitimize Israel. We must fight against that campaign in every forum and label it the anti-Semitic poison that it is. Israel’s existence as a Jewish state is not up for debate.”

Regarding Iran, the Romney “white paper” repeats many of the canards about Iranian intentions that have been debunked even by Israelis, such as the mistranslation of President Mahmoud Ahmadinejad’s statement regarding “wiping Israel off the map.” But Romney’s neocon foreign policy team even suggests using that mistranslation to indict Ahmadinejad for war crimes:

“Romney will also push for greater diplomatic isolation of Iran. The United States should make it plain that it is a disgrace to provide Iran’s Holocaust-denying president, Mahmoud Ahmadinejad, the trappings and respect offered to responsible heads of state. He should not be invited to foreign capitals or feted by foreign leaders.

“Quite the opposite. Given his calls for Israel to be wiped off the map, Ahmadinejad should be indicted for incitement to genocide under Article III of the Convention on the Prevention and Punishment of the Crime of Genocide.”

So, even Americans disappointed in Obama’s foreign policy should recognize what the stakes are in November. They include whether to put hard-line neocons back in charge of U.S. foreign policy and the American military.

← How US Hubris Baited Afghan Trap
Method to Republican ‘Madness’ →