As the richest one percent consolidates its wealth and power, the 99 percent are fed junk food for the mind and the body, explaining the overwhelming sense of emptiness even amid the obesity of physical and mental over-consumption, a wrenching human dilemma that ultimately must be confronted, writes Phil Rockstroh.

Due to the consolidation of wealth and privilege into fewer and fewer hands, thus requiring escalating amounts of officially mandated surveillance and brutality to maintain social order, the natural trajectory of unregulated capitalism tends towards hyper-authoritarian excess, even towards fascism.

Moreover, by the standards of capitalist ideology, and exacerbated by the rigged nature of economic and social arrangements — large segments of society are deemed “losers,” and, resultantly, will grow restive, if scapegoats aren’t invented to mitigate a sense of humiliation and displaced rage. 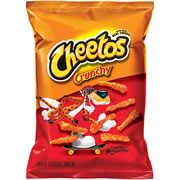 A bag of Cheetos

Accordingly, rightist demagogic fictions can seize the psyches of large segments of the general public: immigrant interlopers wreck the economy; minority layabouts suck-up public funds; gays and women, possessed of dubious morality, destroy the nation’s moral fabric; lefties are driven to challenge the system, but only because of their spite, born of jealousy.

The “purer” the form of capitalism the faster the rise of fascism. There is a dark and bitter grace to this: Fascism is the deranged agency that sends the capitalist machine into systemic runaway, thus the system crashes and burns — and out of its ashes and debris a more humane system can come into being.

Although the yearning for freedom is inborn, as is the case with the development of any skill or talent, one must open oneself to its promise by discipline and practice. Otherwise, attempts at exercising freedom — free will’s dance with resistant and changing circumstance — can be an ugly sight to behold.

Witness the following litany of the lost evinced by us, the denizens of late-stage capitalism: The dismal air haunted and minds distracted cluttered by the ceaseless chatter of those dim ghosts of human discourse known as text messages and tweets; the parade of preening narcissists and prattling sub-cretins that is celebrity culture and Reality Television; the joyless bacchanal termed the nation’s epidemic of obesity.

Experiencing freedom involves risk, imagination, and discipline. In contrast, choosing between purchasing a bag of Cheetos or a bag of Doritos amounts to not quite the same thing. Resisting the call to freedom leaves an individual empty, and bag after bag of salted snack food will not sate the hollow ache within when one chooses the benumbing safety of culturally proffered palliatives over living out the truth of one’s being.

A thousand text messages will never replace a single kiss because a kiss conjures both the soul’s numinosity (or supernatural) and brings earthly complications — the stuff of freedom.

When your heart aches, you are experiencing or being beckoned towards your destiny. Depending on the choices that you make, you can become waylaid at a fast-food drive-thru or risk the road towards freedom that unfurls before you. Hint: The excessive heft acquired by your hindquarters will begin to shrink as you begin a long distance trek in the direction of freedom.

What forces unloose titanic appetites devoid of reason and restraint? Why is more than you can ever need never enough? How is it that a trillion dollars can be spent on military weaponry, but the collective psyche of this nation continues to be gripped by nebulous fear?

Expressed in mythopoeic lexicon: The appetite of a Titan (e.g., the limit-devoid greed and empty appetite of late capitalism) will grow so random and ravenous that he will devour his own young, while his presence will cause the young to construct Icarusian wings but an (infantilized by the internalization of consumerist impulsiveness) adult-child of the corporate state can never devour enough sky, thus put enough distance between himself and his own titanic need to escape earthly circumstance until his wings of wax are undone by the steadfast sun, and he is returned to the inhuman eternity of the sea’s briny womb (e.g., languishing in the media hologram, avoiding the implications of personal destiny-denied and global-wide ecocide).

The appetite of the earth is insatiable. Life must live on death. To become fully human, one must make peace with this fact by an acceptance of limits, by drawing lines of demarcation between necessity and titanic want.

One needs one’s emptiness every bit as much as one has the need to be “fulfilled.” How so? Because room is required within so that new awareness can grow. Therefore, love your inner, empty places. It is the method that you live your way into the future.

From time to time, I have been asked, how does one cope with the ever-increasing “complexity” of our age. Short answer: It would be ill-advised to become adapted to a madhouse.

Instead, attempt to view complexity as future compost. At this stage, a song of grief is as resonate as a song of ebullience. … Rot ensures renewal; the future is compost and compost is the future. Thus: Rejoice in the reek. Mortification restores our humanity, turning us away from the tyranny of unchecked proliferation. It bestows us with the ability to love our limits. In this, it is synonymous with grace.

In a nation defined by vast wealth disparity and the deprivation it causes others on the planet, by means of impoverished lives and ecological devastation, taking more than one’s share contributes to the vast harm done. The corporate food industry wrought epidemic of obesity in the U.S. is a microcosmic representation of a global-wide system of macro-imperialism.

There is a need in both the besieged psyche of an individual and its societal analog — in our own case, in the collective psyche of a declining nation — to worship and fear phantoms and view flesh and blood as phantasmal.

As a culture, for example, we elevate celebrity culture to cultic status while ignoring the suffering of the poor; the teabagger crowd is accepted as a legitimate political movement, not as corporate state Astroturf; that there exist people known as “Islamo-Fascists”; and the acceptance as fact by all too many the noxious corporate media fiction that the energies of the Occupy Wall Street movement have faded — but the outcomes of the overpriced theatrical artifice of U.S. election cycles represents the democratic expression of the political will of a free people.

Phantoms arrive in the psyche when one refuses life’s ongoing invitation to commune with flesh and blood beings; to engage the rigors of insightful thought; to know both the agony and the release of heart-opening engagement and falsity-cleaving insight.

Apropos: “The foundation of all mental illness is the unwillingness to experience legitimate suffering.” –Carl Jung

As we are surrounded by gibbering, imploring media phantoms, our hunger to regain a resonate relationship with the world at large grows yet the corporate state proffers drive-thru window cuisine. We give them our life blood — and, in return, we settle for an evening at Applebees. And the plundering class insists we are privileged to be offered this that our plight could be worse we could spend our hours languishing in one of their foreign sweatshops.

As the one percent has acquired their grotesquely bloated assets, large segments of the American middle and laboring classes have acquired larger and larger amounts of excess body fat. As corporate executives have sweetened their salaries with limitless perks and multimillion dollar bonuses, their workforce has sucked down copious portions of high fructose-based soft drinks and obesity-engendered disease has increased accordingly.

“Soul enters only via symptoms, via outcast phenomena like the imagination of artists or alchemy or ‘primitives,’ or of course, disguised as psychopathology. That’s what Jung meant when he said the Gods have become diseases: the only way back for them in a Christian world is via the outcast.” — James Hillman

To the mind of a child, his/her parent’s view of the world constitutes the very architecture of their psyche. The world carries the imprimatur of their parents’ face. A child’s character begins to develop when he/she begins to compare what they carry within, forged by paternal admonition and action, to their experiences outside the home. If the child remains in a passive position, then his/her personal destiny becomes arrested.

This is the poisoned apple proffered to the dormant beauty within us all. Conversely, we must accept the small, hidden aspects of our character (our helpful dwarves) that dwell in a deep forests within, far from the cold castles of paternal expectation, to be able to awaken to hidden potential.

Life in an authoritarian state, which is paternalistic by nature, arrests the psyche’s drive to self-awareness; it puts one to sleep with infantilizing bribes — e.g., all the bright and shiny things of the consumer state — as it manipulates by means of coercive fear — e.g., the looming dragons of poverty and police-state intimidation.

“In Freud’s time we felt oppressed in the family, in sexual situations, in our crazy hysterical conversion symptoms, and where we felt oppressed, there was the repressed. Where do we feel that thick kind of oppression today? In institutions — hospitals, universities, businesses; in public buildings, in filling out forms, in traffic” –James Hillman

There exist few viable alternatives within the present political set-up to address the degradations inflicted by the corporate state and the machinery of duopoly in place to maintain the systems reach and power — and there will not arrive a mainstream prince to confront the vain usurpers and slay the institutional dragons who cling to power in the present era.

This is an unpleasant truth, but it is true nevertheless. The sooner one faces this reality: the hopelessly corrupt nature of the present system — the closer we, collectively, move towards the creation of alternative arrangements when the current one collapses from its own corruption.

Poets of previous generations warned that one’s soul could be lost in blind pursuit of vaults of riches and limitless knowledge. It is difficult not to laugh in derision or weep in anguish for a people who sell their soul for access to the contents of a convenience store.

Addiction to fattening food speaks of our inner emptiness; so-called Reality Television relates to our hunger for social engagement and communion; the images that haunt the corporate-state media hologram attract us because we long for the images that rise from the soul.

In timeless stories, such as Sleeping Beauty and Snow White, the awakening kiss of a princely figure should not be misapprehended with gender-based overtones of exclusively male power and dominance. Instead, the symbolic prince should be read as — the possibility that unfolds as one’s true calling when one awakens to one’s circumstance.

In our time, this timeless tale plays out as: The ongoing challenge we have been given to face and struggle against the life-devouring, institutional dragons of corporate-state governance.

Of course, there will never arrive a tacked-on, Disneyesque “happily ever after” ending. There is no distant kingdom of the mind that exists beyond the reach of harm or corruption. If there were, new stories would cease to unfold. By this method, this world beckons us to live out our own unique tale.

Phil Rockstroh is a poet, lyricist and philosopher bard living in New York City. He may be contacted at: phil@philrockstroh.com . Visit Phil’s website http://philrockstroh.com / And at FaceBook: http://www.facebook.com/profile.php?id=100…