From Editor Robert Parry: Ex-CIA analyst Ray McGovern paid Consortiumnews a big compliment the other day, when he said he hoped our Web site could endure because it offers historians and citizens a solid record from which to understand what’s happened in the United States over the past 16-plus years and even longer.

Ray’s point was that our unique brand of investigative journalism doesn’t just lay out the facts but includes the broader context, from the relevant history to the role of media. We also have never shied away from presenting the truth as our journalists find it. We have been willing to challenge the powers-that-be in government, business and the mainstream news media.

I share Ray’s hope that this Web site can endure, but we need the help of our readers to do that. As tight-fisted as we are in our spending, we do need at least a modest budget to pay the bills, including some money for reporting and editing. 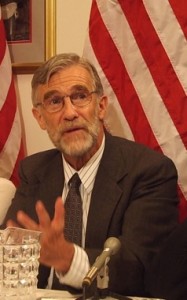 Right now, we are trying to complete our spring fund drive by getting at least halfway to our goal of $25,000. Please help if you can.

If you want one of the thank-you gifts, just follow-up your donation with an e-mail to consortnew@aol.com. Otherwise, we’ll put your entire donation toward keeping Consortiumnews.com going through this election year and beyond.