The Occupy movement vows to reemerge this spring with a focus on May Day, the traditional day of workers’ protests. But Occupy’s call for a general strike on May 1 may be undercut by the movement’s unwillingness to lay out specific reforms to help the 99 percent, notes Danny Schechter.

When you hear the term “Spring Training,” most of us think baseball, but, this year, it has a different context because the Occupy Movement has appropriated the term to describe educating and preparing activists for non-violent nationwide protests and a hoped-for General Strike slated for May Day 2012, this May 1.

The idea of “Spring” is more connected to the “Arab Spring,” a time of revolt than the season we’ve entered. 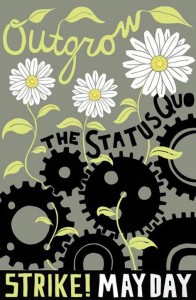 May Day poster at occupywallst.org

Can this relatively new movement pull off an ambitious General Strike to shut down a city like New York? In many ways, the success of this tactic requires alliances and coalitions that take far more time to build.

Internal fears of “co-optation” may make it harder for Occupy to reach out to movements and to political tendencies that are more reformist, although some labor unions are supportive.

Even if Occupy can’t fully “shut it down” this year, the actions will attract media attention and show that this movement is still going and growing. It will become one more building block for sustained direct action. That is, if it doesn’t turn into the kind of mayhem that divided Occupy Oakland when violence followed its hoped for General Strike.

Throughout the history of May Day, there have been tensions between anarchists and socialists. In 1886, one group issued a “Workingmen to Arms” proclamation.  It said. In part, “one pound of dynamite is better than a bushel of ballots.” Today, some members of the “black bloc” appear to consider the trashing of a Starbucks as a revolutionary act, as if there is a link between lattes and liberation.

When you go back to the very first May Day rally overseas, held on May 4, 1890, in Hyde Park in London, you can read the remarks by Eleanor Marx (yes, from that family!) reminding the huge crowd that their giant mobilization followed smaller ones in earlier years.

“I can remember,” she said, “when we came in handfuls of a few dozen to Hyde Park to demand an Eight Hours’ Bill, but the dozens have grown to hundreds, and the hundreds to thousands, until we have this magnificent demonstration that fills the park today. We are standing face to face with another demonstration, but I am glad to see that the great masses of the people are on our side.”

That protest had a specific focus in seeking the eight-hour day for workers, an economic justice issue. Specific demands are important if you want the public to understand why you are protesting, what your movement wants., and how you are not just out to promote yourselves.

Added Marx: “Those of us who have gone through all the worry of the Dock Strike, and especially the Gas Workers’ Strike, and have seen the men, women and children stand round us, have had enough of strikes, and we are determined to secure an eight hours’ day by legal enactment; unless we do so, it will be taken from us at the first opportunity. We will only have ourselves to blame if we do not achieve the victory which this great day could so easily give us.”

Again the protest was projected as part of a process, not an event in itself, or for itself, but one more action in an ongoing struggle designed not for some apocalypse but to build the movement even stronger.

She concluded, “we aim at a time when there will no longer be one class supporting two others, but the unemployed both at the top and at the bottom of society will be got rid of. This is not the end but only the beginning of the struggle; it is not enough to come here to demonstrate in favour of an eight hours’ day. We must not be like some Christians who sin for six days and go to church on the seventh, but we must speak for the cause daily, and make the men, and especially the women that we meet, come into the ranks to help us.”

When we think of that event in London, all these years, later we may not be aware of workers and working people are under attack today, not just politically but economically. The high price of gasoline in the U.S. is expected to go up even more this May.

The British press is reporting that there will be another development there on May 1. Read this: “Thousands of mortgage customers will see their monthly repayments rise as lenders increase their standard variable rates, leaving many borrowers locked into expensive deals.

“Halifax’s SVR rise of 0.49% to 3.99% kicks in on 1 May, as do similar increases from Bank of Ireland, Clydesdale and Yorkshire banks despite there being no change in the Bank of England base rate. In early April, the Co-operative Bank also said it would also increase its standard variable rate by 0.5% to 4.74% on 1 May.

“Mortgage analysts claim at least a million borrowers will be affected by the rises, which have been blamed on changing conditions in the mortgage market and the increased cost of funding. Lending is funded from a combination of repayments from existing borrowers, savings deposits and, most importantly, buying in money from the money markets. It is the cost of the latter that ultimately determines the price of mortgages, and is leading.”

So May Day has two faces. It is a day for revolt and for repression.

In America, the powers-that-be neutralized the symbolic importance of May Day, by substituting Labor Day in September, an occasion for barbecues, not barricades.

This happened perhaps because workers groups and socialist movements had been rallying on May Day since May Day 1886. Back then “more than 300,000 workers in 13,000 businesses across the United States walked off their jobs in the first May Day celebration in history.”

The IWW noted: “In the late nineteenth century, the working class was in constant struggle to gain the eight-hour work day. Working conditions were severe and it was quite common to work 10 to 16 hour days in unsafe conditions. Death and injury were commonplace at many work places and inspired such books as Upton Sinclair’s The Jungle and Jack London’s The Iron Heel.

“As early as the 1860’s, working people agitated to shorten the workday without a cut in pay, but it wasn’t until the late 1880’s that organized labor was able to garner enough strength to declare the eight-hour workday. This proclamation was without consent of employers, yet demanded by many of the working class.”

So this has been a long struggle, with Occupy stepping into the breach and reviving May Day as a day of solidarity and momentum against rule by the 1 percent.

Let us remember Eleanor Marx’s final words on that exciting May Day so long ago:

Which in sleep had fallen on youâ€¨

Ye are manythey are few.”

News Dissector Danny Schechter blogs at NewsDissector.net His forthcoming new book of his essays is Blogothon from Cosimo Books. He hosts a radio show on Progressive RadioNetwork.com (PRN.fm) Comments to dissector@mediachannel.org