For months, major U.S. news outlets failed to note the consensus among intelligence agencies that Iran was NOT building a nuclear bomb. Now, Big Media is misleading the public about why previous talks failed and the value of Iran’s promises, as Flynt Leverett and Hillary Mann Leverett wrote at RaceForIran.com.

First, Farnaz Fassihi of The Wall Street Journal  “reported” on the perennial myth that internal divisions had “seeped” into the nuclear file and could derail any talks with Iran. She then asserts that “Iran suspended the talks in 2009 after massive demonstrations against the government for alleged voter fraud in the presidential elections.” This is blatantly misleading. 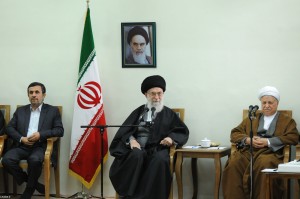 Fassihi was in Iran in 2009; she must know that there were no talks going on at the time of the Islamic Republic’s presidential contest in June of that year, so there was nothing to suspend. The United States had deliberately delayed going into negotiations so as not to give incumbent President Mahmoud Ahmadinejad a “boost” before the election.

She must also know that, after talks finally got going after the election, it was the P5+1 that suspended them in January 2010 because Tehran would not accede to its demands.

But Fassihi does not let her disregard for simple facts stop there. According to her, “many ordinary Iranians” say “that ‘Mr. Khamenei should drink the jar of poison and compromise with the West.’” This is also highly misleading: at best, Fassihi is taking what a few people might have told her over the phone and presenting it as if it were the result of a scientific poll.

Since Fassihi does not report from the Islamic Republic, there is no way that she could know whether “many ordinary Iranians” liken the situation today with the West over their nuclear program to the time when Khomenei decided to accept a cease-fire ending the Iran-Iraq War, after 300,000 Iranians had been killed, the United States had shot down an Iranian civilian airliner, and the Islamic Republic had won back all its territory.

As we have discussed in many posts, polls and other indicators show that most Iranians strongly oppose what they would consider surrendering their nuclear program something that Fassihi completely neglects to tell her readers.

Second, we were struck by the crude attempt to analyze Ayatollah Khamenei’s statements about nuclear weapons and the Iranian nuclear program by James Risen of The New York Times.

Risen starts off well enough, noting that “C.I.A. analysts studying the geopolitical gamesmanship now at play over Iran’s nuclear program have expensive and highly classified tools at their disposal, but one of their best sources is free and readily available: the public utterances of Iran’s supreme leader, Ayatollah Ali Khamenei.”

We ourselves have frequently commented on how rich and important Ayatollah Khamenei’s statements on these subjects are.

But then, Risen indulges the unsubstantiated boilerplate that constitutes so much of America’s conventional wisdom about the Islamic Republic: “Like much of the information about Iran’s secretive and enigmatic government, Ayatollah Khamenei’s remarks are sometimes contradictory, and always subject to widely different interpretations.”

Risen notes that, in February, Khamenei said, “Iran is not seeking to have the atomic bomb, possession of which is pointless, dangerous and is a great sin from an intellectual and a religious point of view.”

Risen duly reports that, in March, Khamenei said, “We do not possess a nuclear weapon, and we will not build one.” He further recounts that “Ayatollah Khamenei has also issued a fatwa, an Islamic edict, against the acquisition of a nuclear bomb by Iran.”

OK, so what’s the problem? According to Risen, “those comments are at odds with some of Iran’s behavior.” Although Risen never tells us what that behavior might be, the context would lead an educated reader to conclude that this behavior must be an actual Iranian effort to build nuclear weapons.

That is flat-out unsubstantiated innuendo. There is no evidence, from the International Atomic Energy Agency, from U.S. intelligence agencies, or from anywhere else, that the Islamic Republic is trying to or has even taken a decision to try to build nuclear weapons.

In addition, Risen asserts that Ayatollah Khamenei’s condemnation of nuclear weapons as a violation of Islam are “at odds” with what he “has said in the past.” Risen’s one example of such a contradictory statement?

Remarks that “Khamenei made last year that it was a mistake for Col. Muammar el-Qaddafi of Libya to give up his nuclear weapons program. Referring to Col. Qaddafi, Ayatollah Khamenei said that ‘this gentleman wrapped up all his nuclear facilities, packed them on a ship and delivered them to the West and said, “Take them” Look where we are and in what position they are now,’ he added.”

At no point in the passage quoted by Risen, or anywhere else in the address from which it is extracted, does Ayatollah Khamenei say, as Risen characterizes it, that “it was a mistake for [Qaddafi] to give up his nuclear weapons program.” Rather, Khamenei points out what happened after Qaddafi surrendered “all his nuclear facilities” and trusted his government’s security to the United States.

This in no way contradicts Khamenei’s multiple statements that the Islamic Republic does not want nuclear weapons, not least because they are haraam , forbidden by God.

But the worst part of Risen’s article comes when he resorts to blatantly false stereotypes about Shi’a Islam: “Complicating matters further, some analysts”, he names not a single one, “say that Ayatollah Khamenei’s denial of Iranian nuclear ambitions has to be seen as part of a Shiite historical concept called taqiyya, or religious dissembling.”

While Risen does not embrace this utter misreading of taqiyya as his own, his uncritical presentation of it circulates, in The New York Times, a bigoted misreading of Shi’a doctrine as justifying lying.

Taqiyya is a religious teaching, rooted in the Qur’an, which instructs Muslims (under specific conditions) that they may disguise their religious identity to save themselves and other believers. It has parallels in other Abrahamic traditions. Consider, for example, the following passage from the Catechism of the Catholic Church:

“The right to the communication of the truth is not unconditional. Charity and respect for the truth should dictate the response to every request for information or communication. No one is bound to reveal the truth to someone who does not have the right to know it.”

Taqiyya is not a license for hypocrisy; it neither condones lying nor relieves Muslims of the obligation to live up to their commitments, in contracts, treaties, or otherwise. It certainly does not justify a religious leader lying to his fellow Muslims about matters on which he is offering moral guidance and instruction, which is what one has to think in order to argue that Ayatollah Khamenei’s multiple statements over several years about the immorality of nuclear weapons are an exercise in taqiyya.

It is truly bizarre that Risen and The New York Times cited “analysts” anonymously in order to make such a loaded and factually inaccurate point.

Flynt Leverett served as a Middle East expert on George W. Bush’s National Security Council staff until the Iraq War and worked previously at the State Department and at the Central Intelligence Agency. Hillary Mann Leverett was the NSC expert on Iran and from 2001 to 2003  was one of only a few U.S. diplomats authorized to negotiate with the Iranians over Afghanistan, al-Qaeda and Iraq. [This article was originally published at RaceforIran.com.]

← Help Us Get to the Halfway Point
What’s Wrong with Florida? →