The rigidity of Official Washington  more than intransigence from Iran is threatening negotiations beginning in Istanbul this weekend. President Obama’s flexibility to ease sanctions on Iran in exchange for Iranian safeguards against building a nuclear weapon is limited by political pressures, says ex-CIA analyst Paul R. Pillar.

Much commentary about the impending talks with Iran on its nuclear program brings to mind Pogo Possum’s comment that we have met the enemy and he is us. Among the impediments to success on both sides of this negotiation, some of the most prominent ones are on our side.

Remarkably, this has been noted by some who could never be accused of being soft on Iran. But the impediments are simply treated as a given, and as a reason to resign ourselves in advance to pessimism about negotiations. It is as if something were preventing us from changing what is actually in our power to change. 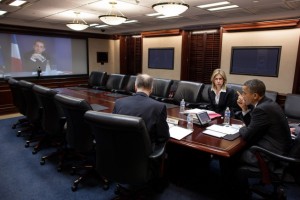 And it is as if when we tie ourselves in political knots in ways that make it difficult, though not impossible, to change, this is somehow the Iranians’ fault. This self-crippling approach toward dealing with Iran starts with the de facto surrendering of U.S. freedom of action to the Israeli government, but it does not end there.

Consider a recent piece by Patrick Clawson of the Washington Institute for Near East Policy, on what attraction a deal with the P5+1 would or would not have for the Iranian leadership. Clawson’s analysis is quite perceptive regarding the unattractiveness to the Iranians of the prospect that concession on their part would be met not by the lifting of any current sanctions but only by a suspension of movement toward still more sanctions.

As Clawson correctly observes, “avoiding prospective sanctions is not a particularly tangible incentive for Iranian leaders, that is, they would have trouble justifying an agreement to their constituents by simply saying, ‘It’s a bad deal, but if we did not take it, life would be even worse.’”

But Clawson says nothing about the obvious inference that more flexibility is needed on the P5+1 side, instead simply taking the inflexibility as a given. He notes, for example, that “Congress has been particularly reluctant to end sanctions it has enacted into law,” without also noting that it is in Congress’s power to change by law whatever Congress has enacted into law.

Clawson attempts to portray some of the lack of economic attractiveness for Iran of striking a deal with the West as being outside the influence of Western governments. But it isn’t. He says that “a number of major international companies that withdrew from Iran in recent years did so at least in part because of the poor business climate,” and that “Iran has a poor record of attracting international investment.”

Well, imposing economic sanctions on a country has a way of doing that. And the sanctions, as well as more direct governmental discouragement of investment in Iran, have been around for a long time. Have we forgotten how the Clinton administration, while it was working hard to discourage European economic relations with Iran, killed a deal that Conoco had reached to develop offshore Iranian oil fields?

Taking U.S. inflexibility as a given is a backdrop to another prominent theme in pre-Istanbul commentary, much of which is clearly designed to lay the groundwork for making a later judgment that “diplomacy has failed.” The Washington Post‘s lead editorial on Thursday is an example.

The editorial writers express a pro forma belief that “military action is neither necessary nor wise in the coming months,” thereby being able to portray any later endorsement of a war as a reluctantly arrived at last resort. They make no secret of where they are going, though, stating up front that the negotiations in Istanbul may be the “last chance for a peaceful settlement” in the “negative sense” that “hardly anyone thinks” that a deal will be struck.

The pessimism is based on what has been reported of the Obama administration’s position toward the talks, but even that position is not obdurate enough for the Post‘s editorialists. They express concern that any near-term deal that would trade restrictions on Iran’s enrichment activity for a freezing of further sanctions and maybe some easing of existing ones, which in fact would be a decidedly beneficial stepping back from the brink of a senseless war, would “allow the regime breathing space,” and according to the Post, that would be bad.

Following the Post‘s advice of no Western concessions at all short of complete stoppage of enrichment would be the perfect formula for making “failure” of diplomacy a self-fulfilling prophecy.

One should bear in mind, amid such advance spinning of the talks, three important points. One is that for diplomacy to succeed requires at least as much attention to inducing flexibility on the U.S. side as in inducing it on the Iranian side.

Fareed Zakaria starts to get to this problem when he says, “The administration has handled its allies, Russia, China, the United Nations and even Tehran with skill. To succeed, however, it has to tackle its most formidable foe, with whom it has not had much negotiating success: Republicans.”

The problem, however, goes beyond Republicans, who have tried to exploit politically an attitude of inflexibility that extends beyond their own ranks.

Second, policymakers can change policies, tactics and even attitudes, no matter how deeply engrained those attitudes seem to be. This is what political leadership is about. If policymakers want a politically attractive argument that can help to sell a deal with Tehran that involves easing of sanctions in return for restrictions on, but not ending of, enrichment, they can start by pointing out how much the sanctions have increased gasoline prices in the United States.

Third, the absence of a deal after Istanbul or later rounds of talks is likely to say no more about Iranian obduracy, although that will be the focus of countless commentaries, than about our own.

← Some Ultra-Rich Abandon Obama
Is Occupy’s ‘Purity’ Under Assault? →