Some of the ultra-rich who backed Barack Obama in 2008 are switching to Mitt Romney in 2012 because the President has called for closing tax loopholes that allow hedge-fund and private-equity billionaires to pay lower tax rates than working stiffs, Bill Moyers and Michael Winship write.

Benjamin Franklin, who used his many talents to become a wealthy man, famously said that the only things certain in life are death and taxes.  But if you’re a corporate CEO in America today, even they can be put on the back burner death held at bay by the best medical care money can buy and the latest in surgical and life extension techniques, taxes conveniently shunted aside courtesy of loopholes, overseas investment and governments that conveniently look the other way.

In a story headlined, “For Big Companies, Life Is Good,” The Wall Street Journalreports that big American companies have emerged from the deepest recession since World War II more profitable than ever: flush with cash, less burdened by debt, and with a greater share of the country’s income. But, the paper notes, “Many of the 1.1 million jobs the big companies added since 2007 were outside the U.S. So, too, was much of the $1.2 trillion added to corporate treasuries.” 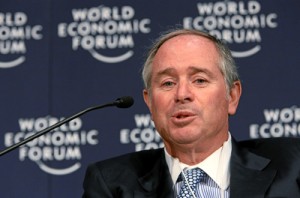 To add to this embarrassment of riches, the consumer group Citizens for Tax Justice reports that more than two dozen major corporations  including GE, Boeing, Mattel and Verizon paid no federal taxes between 2008 and 2011. They got a corporate tax break that was broadly supported by Republicans and Democrats alike.

Corporate taxes today are at a 40-year-low even as the executive suites at big corporations have become throne rooms where the crown jewels wind up in the personal vault of the CEO.

Then look at this report in The New York Times: Last year, among the 100 best-paid CEOs, the median income was more than $14 million, compared with the average annual American salary of $45,230. Combined, this happy hundred executives pulled down more than $2 billion.

What’s more, according to the Times, “these CEO’s might seem like pikers. Top hedge fund managers collectively earned $14.4 billion last year.” No wonder some of them are fighting to kill a provision in the recent Dodd-Frank reform law that would require disclosing the ratio of CEO pay to the median pay of their employees. One never wishes to upset the help, you know. It can lead to unrest.

That’s Wall Street the metaphorical bestiary of the financial universe. But there’s nothing metaphorical about the earnings of hedge fund tigers, private equity lions, and the top dogs at those big banks that were bailed out by tax dollars after they helped chase our economy off a cliff.

So what do these big moneyed nabobs have to complain about? Why are they whining about reform? And why are they funneling cash to super PACs aimed at bringing down Barack Obama, who many of them supported four years ago?

Because, writes Alec MacGillis in The New Republic the President wants to raise their taxes. That’s right while ordinary Americans are taxed at a top rate of 35 percent on their income, Congress allows hedge fund and private equity tycoons to pay only pay 15 percent of their compensation.

The President wants them to pay more; still at a rate below what you might pay, and for that he’s being accused of hold onto your combat helmets “class warfare.”  One Wall Street Midas, once an Obama fan, now his foe, told MacGillis that by making the rich a primary target, Obama is “[expletive deleted] on people who are successful.”

And can you believe this? Two years ago, when President Obama first tried to close that gaping loophole in our tax code, Stephen Schwarzman, who runs the Blackstone Group, the world’s largest private equity fund, compared the President’s action to Hitler’s invasion of Poland.

That’s the same Stephen Schwarzman whose agents in 2006 launched a predatory raid on a travel company in Colorado. His fund bought it, laid off 841 employees, and recouped its entire investment in just seven months one of the quickest returns on capital ever for such a deal.

To celebrate his 60th birthday Mr. Schwarzman rented the Park Avenue Armory here in New York at a cost of $3 million, including a gospel choir led by Patti LaBelle that serenaded him with “He’s Got the Whole World in His Hands.” Does he ever his net worth is estimated at nearly $5 billion.

Last year alone Schwarzman took home over $213 million in pay and dividends, a third more than 2010. Now he’s fundraising for Mitt Romney, who, like him, made his bundle on leveraged buyouts that left many American workers up the creek.

To add insult to injury, average taxpayers even help subsidize the private jet travel of the rich. On the Times’ DealBook blog, mergers and acquisitions expert Steven Davidoff writes, “If an outside security consultant determines that executives need a private jet and other services for their safety, the Internal Revenue Service cuts corporate chieftains a break. In such cases, the chief executive will pay a reduced tax bill or sometimes no tax at all.”

Are the CEOs really in danger? No, says Davidoff, “It’s a common corporate tax trick.”

Talk about your friendly skies. No wonder the people with money and influence don’t feel connected to the rest of the population. It’s as if they live in a foreign country at the top of the world, like their own private Switzerland, at heights so rarified they can’t imagine life down below.

2 comments for “Some Ultra-Rich Abandon Obama”