As international talks begin over Iran’s nuclear program, President Obama has put forward an Israeli demand for the dismantling of a well-protected uranium processing plant, but it’s less clear whether Obama will press the point if it means killing hopes for a peaceful settlement, Gareth Porter reports for Inter Press Service.

The Obama administration has adopted a demand in the negotiations with Iran beginning Saturday that its Fordow enrichment facility must be shut down and eventually dismantled based on an understanding with Israel that risks the collapse of the negotiations.

It is unclear, however, whether the administration intends to press that demand regardless of Iran’s rejection or will withdraw it later in the talks. Washington is believed to be interested in obtaining at least an agreement that would keep the talks going through the electoral campaign and beyond. 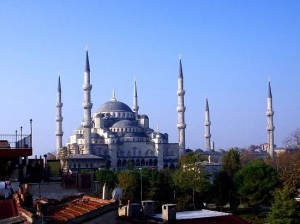 The famed "Blue Mosque" in Istanbul, the Turkish city hosting talks with Iran over its nuclear program

The government of Prime Minister Benjamin Netanyahu, on the other hand, has been extremely anxious about the possibility of an agreement that would allow the Iranian enrichment program to continue. So it hopes the demand for closure and dismantling of Fordow will be a “poison pill” whose introduction could cause the breakdown of the talks with Iran.

In an interview with IPS, Reza Marashi, who worked in the State Department’s Office of Iranian Affairs from 2006 to 2010, said, “If the demand for Fordow’s closure is non-negotiable, the talks will likely fail.”

Iran has already rejected the demand. Responding to the reported demands for halting of 20 percent enrichment and the closure of the Fordow facility, Fereydoun Abbasi-Davani, the head of Iran’s Atomic Energy Organization, said, “We see no justification for such a request from the P5+1.”

The Obama administration apparently accepted Israel’s demand for inclusion of the closure of Fordow in the U.S.-European position in return for Israel going along with a focus in the first stage of the talks only on Iran’s 20 percent enrichment.

It is widely believed that a limited agreement could be reached to end Iran’s 20 percent enrichment and to replace existing Iranian stocks of 20 percent enriched uranium with foreign-fabricated fuel rods for the Tehran Research Reactor if Iran believed it would get some additional substantive benefit from the deal.

Israeli Defense Minister Ehud Barak revealed on April 4 that he had held talks with U.S. and European officials in late March with the aim of getting them to accept Israeli demands for the closure of Fordow, transfer of all 20 percent enrichment out of Iran, and transfer of most of the low enrichment uranium out of country as well.

Barak did not reveal the results of those talks, but three days later, the New York Times reported U.S. and European officials as saying they would demand the “immediate closure and ultimate dismantling” of the Fordow facility as an “urgent priority,” along with the shipment out of the country of its stockpile of uranium enriched to 20 percent.

Reuters reported April 8 that a “senior U.S. official” said the suspension of 20 percent enrichment and closing the Fordow facility were “near-term priorities” for the U.S. and its allies. Reuters also reported that same day that Israel had agreed in March to a “staged approach” in the nuclear talks that would focus in the first stage on halting Iran’s uranium enrichment to 20 percent.

Nothing has been said by either Israel or Western states about shipping low enrichment uranium out of the country, suggesting that the issue remains unresolved. The high-level talks and obvious linkage between the positions leaked to the media by U.S., European and Israeli officials leaves little doubt that such an understanding had been reached.

Responding to an IPS query, Erin Pelton, assistant press secretary at the National Security Council, said she was not aware of any explicit U.S. agreement with the Israelis on the U.S. position in the nuclear talks. But she added, “We have very close consultations with them on Iran policy. We don’t have to have an explicit agreement.”

Israel’s main leverage over U.S. and European policy was the continuing threat of an attack on Iran. Only the day before Barak revealed his consultation with U.S. and European officials on negotiating strategy, the Jerusalem Post reported that “senior defense officials” had said the possible attack on Iran “may be postponed until 2013,” because the “defense establishment” was waiting for the outcome of the nuclear talks.

Barak has long pointed to Iran’s ability to move centrifuges into Fordow, which was constructed in a tunnel facility deep in the side of a mountain, as denying Israel’s ability to destroy most of the country’s enrichment capabilities in an airstrike. That has been the sole justification offered in recent months for threatening an Israeli military strike.

In a blog post in The National Interest, Paul Pillar, former national intelligence officer for the Near East and South Asia, wrote that the “Western message to Tehran” seems to be, “(W)e might be willing to tolerate some sort of Iranian nuclear program, but only one consisting of facilities that would suffer significant damage if we or the Israelis later decide to bomb it.”

Greg Thielmann, senior fellow at the Arms Control Association,” said in an interview with IPS, “There are Americans who believe it is important to keep all Iranian facilities at risk in case Tehran decided to build a nuclear weapon.”

But Thielmann, former director of the Strategic, Proliferation and Military Affairs Office in the Department of State’s Bureau of Intelligence and Research, said the reported demand for the closure and dismantling of the Fordow site “is more an interest of the Israelis than of the United States”.

Reza Marashi, the former State Department specialist on Iran and now research director at the National Iranian-American Council, said U.S. officials have been concerned about Fordow, but that it is the Israelis who have “turned their inability to destroy Fordow into a major issue”.

Thielmann said he hopes the administration is “doing this for the Israelis and that it wouldn’t push it once it is rejected.”

While the demand on Fordow clearly responds to a U.S. need to accommodate Israel, it is also in line with Obama administration efforts to intimidate Iran by emphasizing that it has only a limited time “window” in which to solve the issue diplomatically. The administration has implied in recent weeks that Israel would strike Iran’s nuclear facilities in the absence of progress toward an agreement guaranteeing Iran would not go nuclear.

That emphasis on threat corresponds to the approach championed by hardliners since the beginning of the Obama administration. Former Obama adviser Dennis Ross, who is still believed to maintain personal contact with Obama, was quoted in the New York Times on March 29 as saying, “For diplomacy to work there has to be a coercive side. If the Iranians think this is a bluff, you can’t be as effective.”

In a recent article, Ross makes clear that what he calls “coercive diplomacy” would not involve the promise of lifting sanctions, because the U.S. would continue to demand change in Iran’s “behavior toward terrorism, its neighbors and its own citizens.”

If such a “coercive diplomacy” underlies the administration’s negotiating strategy, it would explain the absence of any leaks to the press about what it plans to offer the Iranians in return for the concessions being demanded. Reza Marashi noted that administration officials have been “holding their cards very close to their chest” in regard to what they intend to offer Iran.

The absence of any groundwork for significant incentives leads Marashi to believe the administration plans to rely on threats rather than incentives to get Iran to agree to its demands.

The Obama administration appears to be counting heavily on the one incentive it is prepared to offer in the talks: the recognition of Iran’s right to enrich uranium on Iranian soil. The U.S. and Europeans will certainly demand strict limits on the number of centrifuges and the level of enriched uranium Iran could maintain.

Iranian agreement to such limits would require major changes in U.S. policy toward Iran, including dismantling sanctions and accepting a major Iranian political-diplomatic role in the region as legitimate.

Gareth Porter is an investigative historian and journalist specialising in U.S. national security policy. The paperback edition of his latest book, Perils of Dominance: Imbalance of Power and the Road to War in Vietnam, was published in 2006. [This article was originally published by Inter Press Service.]