Many admirers of Judaic traditions, including the commitments to independent thought and social justice, have wondered why the Israeli experience has veered so far from those honorable principles. But Lawrence Davidson says some Israelis continue to ask the tough questions and reject anti-Arab bigotry.

Those norms may or may not espouse racism and other prejudices. That these views may be objectionable to outsiders doesn’t matter in terms of how conformity inside the group works. They will be adhered to because they are culturally imbedded. This “locally normal” also will adhere to the country’s standard history and mythology. Collectively, all these traits are what constitute “good” citizens, the glue that maintains social solidarity. 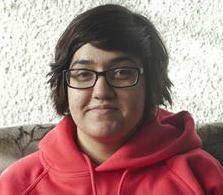 Noam Gur, an 18-year-old Israeli who refuses to serve in the military because of its mistreatment of the Palestinians.

In a socio-political sense, the fact that most people are “normal” in this way is not a mistake. There is probably a genetic inclination for such behavior. After all, if most people did not behave this way, you could not maintain stable societies. Still, there are drawbacks to being “locally normal.” For one thing, the more “normal” you are the less independent (at least in socio-political terms) a thinker you are.

The strange thing is that the “locally normal” would not agree that thinking outside the community box is a legitimate act of independence. Such a stance would appear, from inside the box, as not being independent so much as being antisocial and perhaps unpatriotic. And, such behavior is going to make “normal” folks suspicious and fearful.

That is the genetic impulse again. Stay with the group and you stay safe. Safe from what? Safe from people on the outside, of course. If you are really looking for a “locally normal” definition of independence it is going to be an economic one: having a good job, paying your own bills, and not living with their parents.

It is against this background that we might consider the plight of Israel’s refuseniks. These are Israeli Jewish citizens who are “locally abnormal” either because they refuse to serve beyond the 1967 borders (that is they refuse to go into the Palestinian Occupied Territories) or refuse induction into the Israeli military altogether. There are only between 1,000 to 2,000 individuals in this group a figure small enough to make them rare.

There is evidence of some sympathy on the far left side of the Israeli political spectrum for the refuseniks, but there is nothing but condemnation from other quarters. Almost all Israeli politicians have labeled the refuseniks “dangerous” and some have described their behavior as treasonous and “helping the enemy.”

The Israeli courts, of course, have declared that refusal to serve in the military (by all but the Ultra Orthodox) for any reason other than conscientious objection is illegal. Interestingly, one of the reasons used by the Israeli high court to condemn the actions of those who refuse to serve in the Occupied Territories is that such behavior “weakens the ties that bind us as a nation.” Thus Refuseniks are so “locally abnormal” that they usually get thrown into jail.

Nonetheless, the refuseniks continue to pop up, albeit at slow intervals. The most recent one is Noam Gur (the first refusenik in 2012). She is an 18-year-old Israeli Jew who has just announced that she will refuse mandatory military service. In an open letter, she announced that “I refuse to join an army that has, since it was established, been engaged in dominating another nation, in plundering and terrorizing a civilian population that is under its control.”

Ms. Gur is not sure how she came by these (for Israel) “abnormal” sentiments. At the age of 15, she started trying to make sense of the Nakba, the 1948 exodus of some three-quarters of a million Palestinians from what is now Israel. This led her to join the small number of other “abnormal” Israeli Jews taking part in Palestinian-led protests in the West Bank, thus “seeing what was going on with my own eyes.”

By 16, she knew that she could not “take part in these [Israeli] crimes [against Palestinians]” and that meant she could not go into the army. She has gotten plenty of negative feedback from “locally normal” Israelis securely situated within their community box, yet Ms. Nur does not find this response intimidating. “I am following what I believe in,” she says, “I don’t really care what other people might have to say about it.”

Though she has little faith that Israeli society can change from within, she still urges her peers to “look into what they are doing.” As it stands now, “most 18 year olds” bound for military service “don’t really know what they’re going into. They don’t really know what is going on in the [West Bank and Gaza Strip]. They only … see Palestinians for the first time … once they are soldiers.”

What Gur is describing is a closed Israeli society. Much like the U.S., it doesn’t matter if there is freedom of the press and speech because education and personal interaction reinforces a broad set of perceptual norms, which, over time, literally come to dictate the parameters of thought. These parameters define “normality” within the nation’s local space. If, for whatever reason you find yourself outside of the box, you’re a social mistake.

Is it possible to defy the socially constructed definition of “local normality” that exists in Israel, or any other state for that matter, and declare on the basis of good evidence criteria for a “universal civilized normality”?

Perhaps one way to do this is to play that old religious card and “appeal to a higher power.” But in this case we do not have to look to the heavens or some divine source. All we have to do is draw our criteria of behavior from sources such as the Universal Declaration of Human Rights (UDHR).

Here are some criteria for “universal civilized normality” taken from the UDHR:

1. A society’s citizens are normal and civilized when they do not support their government’s practice of “torture or cruel, inhuman or degrading treatment or punishment.” (UDHR, Article 5)

2. A society’s citizens are normal and civilized when they do not support their government’s practice of “arbitrary arrest, detention or exile.” (UDHR Article 9)

3. A society’s citizens are normal and civilized when they accord all elements of their population “the right to freedom of movement and residence…. (UDHR Article 13)

4. A society’s citizens are normal and civilized when they accord all “men and women of full age,” residing within their country “the right to marry and found a family” “without any “limitation due to race, nationality or religion.” (UDHR Article 16)

5. A society’s citizens are normal and civilized when they do not support the “arbitrarily taking of [another resident’s] property.” (UDHR Article 17)

6. A society’s citizens are normal and civilized when they demand that all residents have “the right to a standard of living adequate for health and well-being including food, clothing, housing and medical care and necessary social services, and the right to security in the event of unemployment, sickness, disability, widowhood, old age…”. (UDHR Article 25).

Considering this sampling of criteria for “normal, civilized behavior,” where would we rank the citizens and supporters of the Israeli state? Well, a recent poll of Israeli high school students found that fully half of them “opposed equal rights for Arabs.” Another video poll revealed that “racism is rampant among Israeli youth.”

As it turns out, many Israelis do support the state’s use of torture, arbitrary arrest, restriction of movement, the arbitrary confiscation of property, placing barriers in the way of marriage, and the purposeful maintenance of less than adequate standards of living for the Palestinians under their jurisdiction.

Thus, one must conclude that there is a wide gap between what we might consider to be “universal standards for civilized normality” and those standards of “local normality” in place in Israel. Therefore, it turns out that Noam Gur and other Israeli Jews like her must actually defy the majority in order to preserve “civilized normality.”

Maybe it is a thousand years of stress culminating in the Holocaust that turned today’s Jewish Zionists into such obsessively insecure people that they cannot accurately judge their own national interests. Maybe it is a variant on “the battered child syndrome” that has led the Israelis to batter the Palestinians and then, when they resist, call them anti-Semites. Maybe the problem is that they have allowed religious fanatics and political bigots to run their country (hardly a problem unique to Israel).