Exclusive: “Game Change,” the HBO movie on John McCain’s choice of Sarah Palin, faults his Republican campaign for its slipshod vetting of the little-known Alaska governor, but leaves out the back story of big-time neocons from D.C. helping position Palin for her surprise rise and Palin manipulating everyone, writes Morgan Strong.

HBO’s “Game Change” is a revealing film on the rise of Sarah Palin to national prominence. It is also an indictment of her ignorance and of the Republicans’ folly in nominating her as their vice presidential candidate in 2008.

The film points out that she, in all her vacuous charm, would have been only a 72-year-old man’s heartbeat away from assuming the presidency, a potential calamity that Republican strategists around Sen. John McCain initially justified on grounds of political expediency, getting a bump in the polls. 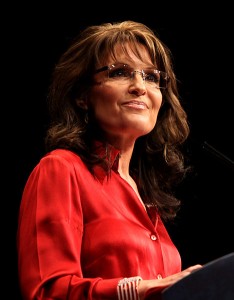 Though that much is true, the “Game Change” story does skip over some key facts. The movie would have us believe that Palin was chosen from a narrow field of prominent Republican women more or less by chance, because she was a fresh face and a stand-out personality. According to the film’s narrative, McCain’s campaign seeking a “game changer” made the choice with very little involvement from the GOP presidential nominee himself.

The film also presents Palin as mostly an unsuspecting political naif who is touring a county fair with her children when she receives McCain’s overture. It is a bolt out of the blue or in her interpretation God opening a door. However, there is a back story that was missed regarding how Palin and a number of influential neoconservatives helped create the opportunity for her.

Palin herself had sensed her potential for securing the Republican V.P. nomination immediately on winning Alaska’s 2006 gubernatorial election. She worked hard to draw the attention of Republican bigwigs and to gain their trust and support.

Despite her professed repugnance for the East Coast press establishment, she hired an East Coast P.R. firm to create a campaign depicting her as a brave little hockey-mom governor taking on huge evil conglomerates and their political lackeys in her fight to build a pipeline through the state to carry Alaska’s oil production.

Palin also got lucky when William F. Buckley Jr.’s National Review and Rupert Murdoch’s Weekly Standard, both influential conservative publications, sponsored a luxury cruise for committed conservatives to Juneau, the state capital of Alaska. Palin did not let this opportunity to woo much of the Right’s intelligentsia slip away.

Palin invited this influential group to the Governor’s mansion for a luncheon, where those present were struck by the lengthy and impassioned grace she delivered before the meal. Palin, La Passionate, was showing off her evangelical, devoutly Christian side. She also took a few of the more important pundits on helicopter rides around the state.

Though none of her new-found followers seemed to have a clear idea of how qualified or unqualified Palin was for national office, that didn’t matter very much. What mattered was the Palin illusion, the down-to-earth image of a plucky everywoman who could “connect” with average Americans.

These conservative intellectuals were wowed by her “star quality.” She was described by one admiring columnist as a mix of Joan of Arc and Annie Oakley. The Annie Oakley part presumably derived from her supposed proficiency at shooting moose, which she bragged about often.

Though her actual skill as a hunter remains in dispute, Palin proved, in a political sense, very adept at shooting these Republican big fish in a barrel. Palin wooed and won over many, if not all. The hot buzz in Washington was Sarah Palin for V.P.

On conservative talk shows, Palin’s name also was frequently advanced as a smart choice for McCain’s running mate, a youthful and spirited counterweight to the aging and sometimes irascible McCain. As the groundswell grew, Palin made sure to grant time and access to Republican leaders who might influence McCain’s choice.

Yet, the HBO movie would have us believe that this virtually unknown governor of a lightly populated state, who had held office for less than two years, was somehow picked by near happenstance, through some wondrous mutuality of purpose, a fateful random shot in the dark, a political Cinderella who was discovered because “the glass slipper fit.”

“Game Change” is correct to note that no one seems to have taken the trouble to interview Palin at length about her base knowledge of the U.S. government and world affairs. To the shock of McCain’s staff, she didn’t know what the Fed is and believed the Queen of England has a substantive role in governing. She did not know why North and South Korea were two different countries. She thought Saddam Hussein had attacked the World Trade Center and that was the reason for invading Iraq.

But the problem wasn’t just the McCain campaign’s rushed vetting of newcomer Palin, as the film depicts. The failure went deeper, since Palin’s candidacy was pushed by some of the Republican Party’s top intellectuals who also didn’t bother to know or didn’t care that she was unqualified to assume the presidency.

Leaving out that background may have made for a better movie narrative, but it also had the effect of shielding Kristol and other influential neoconservatives who promoted her candidacy from any blame for the reckless blunder that Palin represented.

The movie also spares the leaders of the Republican Party, including McCain who is portrayed as a well-meaning, deeply patriotic figure devoid of petty ambition. He physically recoils at some of the ugly passions that Palin’s fiery rhetoric stokes against Barack Obama.

In one of the last scenes, McCain warns Palin to stay away from men like Rush Limbaugh who, the McCain character says, will ruin the Republican Party. Palin, however, did not take that piece of advice.

She recently defended Limbaugh against the intense criticism he received after calling a young woman, a Georgetown Law student who testified before Congress, a “slut” and “prostitute” who should get birth-control pills under her insurance plan only if she and her friends agree to post videos of their sex acts online for Limbaugh and his fans to watch.

Palin, who has often claimed to be the victim of sexist remarks herself, essentially defended Limbaugh as a victim of double-standards by liberals who simply want to deny the radio-talk-show star his First Amendment rights of free speech.

Given Palin’s intense popularity among the GOP’s Christian Right “base” and her burning political ambitions some leaders of the Republican establishment have come to view Palin as a threat to their own interests, which focus on winning elections and using government power to shape economic and foreign policy to their advantage. To them, Palin has become a supernova swallowing lesser Republican stars.

In that sense, “Game Change” can be viewed as a propaganda film on behalf of the Republican establishment, as represented by Palin’s campaign staff who contributed heavily to the movie’s script and have vouched for its general accuracy. The impact of the film indeed has served to dim Palin’s political star by reminding the public of her dangerous ignorance and her demagogic speaking skills.

But Palin surely won’t go quietly into the night. She is driven to stay in the limelight and apparently believes that despite the embarrassment of her vice presidential candidacy  she can and should be the President of the United States, what she indicates in the film is “God’s will.”

Palin proudly describes herself as “not a member of the permanent political establishment.” She insists that she is a Washington outsider and an antidote to the elitist culture inside the Washington Beltway.

Of course, she leaves out how much she owes her prominence to her clever cultivation of those sophisticates from that same elitist, inside-the-Beltway culture, the likes of William Kristol, who counts himself as one of the smart neocons who “discovered” the simple “Sarah from Alaska.”

At the end of “Game Change,” Palin is shown desperately trying to read her own concession speech on Election Night. But campaign strategist Steve Schmidt’s character forcefully tells her that the concession speech is always delivered by the head of the ticket as a way to convey the orderly and peaceful transition of government in a democracy an especially important moment given that the U.S. electorate had just chosen its first African-American president.

Palin, who had roused campaign crowds to shouts of violence against Obama with her casual accusations that he so disdained America that he would “pal around with terrorists who targeted their own country,” simply didn’t understand what Schmidt was telling her. She just wanted to put herself at center stage, again.

She didn’t grasp the valued principle that in a democracy, public gestures and rituals at such moments are crucial to show that the nation’s unity remains unshaken. But the blame for the dangerous Sarah Palin phenomenon reached far beyond her personal megalomania.

Morgan Strong was a former professor of Middle Eastern history, and American history. He served as an adviser to CBS News’ “60 Minutes” on the Middle East.

16 comments for “The Sarah Palin/Neocon Alliance”