Exclusive: President Obama’s choice in 2009 to expand rather than wind down the Afghan War now looks to be one of his worst decisions as the conflict drifts toward a bloody defeat. But a key factor behind his misjudgment, the myth of George W. Bush’s “successful surge” in Iraq, lives on, writes Robert Parry.

As the Afghan War grinds toward another U.S. military defeat on the heels of the forced departure from Iraq Official Washington remains in denial about these failed neocon strategies, still preferring to embrace happy myths about “successful surges” and ignoring the actual outcomes.

I encountered this cognitive dissonance again Saturday morning when I was flipping the TV channels and landed on MSNBC’s “Up with Chris Hayes,” with substitute host, the Washington Post’s Ezra Klein. There was a panel of bright and attractive pundits again praising President George W. Bush’s Iraq War “surge.” 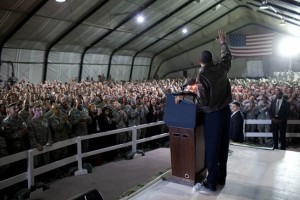 President Obama addresses U.S. troops at the Bagram base in Afghanistan on March 28, 2010. (White House photo by Pete Souza)

One had to wonder: Did these seemingly smart people not notice that the U.S. military was sent packing from Iraq at the end of 2011, less than three month ago? Do they not know that the giant U.S. Embassy, once meant to be a command center for imperial domination of the Middle East, sits mostly idle?

Were they oblivious to the fact that Iraq, still a shattered society afflicted by terrible sectarian violence, leans closer to Iranian foreign policy than America’s because of Bush’s invasion?

No doubt, the myth about Bush’s “successful surge” has been deeply implanted in the conventional wisdom of Washington. But the truth is that it was only “successful” in that it delayed the ultimate American defeat until Bush and his neocon cohorts had vacated the White House and the blame could be shifted to President Barack Obama.

Other than sparing “war president” Bush the humiliation of having to admit defeat, the dispatching of 30,000 additional U.S. troops in early 2007 did little more than get nearly 1,000 additional Americans killed almost one-quarter of the war’s total U.S. deaths along with what certainly was a much higher number of Iraqis.

For example, WikiLeaks’s “Collateral Murder.” video depicted one fairly typical scene during the “surge” in which U.S. firepower mowed down a group of Iraqi men, including two Reuters news staffers, walking down a street in Baghdad. The attack helicopters then wounded two children in a van which stopped to take survivors to a hospital.

A more serious analysis of what happened in Iraq in 2007-08 would trace the decline in Iraqi sectarian violence mostly to strategies that predated the “surge” and were implemented by the commanding generals in 2006, George Casey and John Abizaid, who wanted as small a U.S. “footprint” as possible, to tamp down Iraqi nationalism.

Among their initiatives, Casey and Abizaid deployed a highly classified operation to eliminate key al-Qaeda leaders, most notably the killing of Abu Musab al-Zarqawi in June 2006. Casey and Abizaid also exploited growing Sunni animosities toward al-Qaeda extremists by paying off Sunni militants to join the so-called “Awakening” in Anbar Province.

And, as the Sunni-Shiite sectarian killings reached horrendous levels in 2006, the U.S. military assisted in the de facto ethnic cleansing of mixed neighborhoods by helping Sunnis and Shiites move into separate enclaves, thus making the targeting of ethnic enemies more difficult. In other words, the flames of violence were likely to have abated whether Bush ordered the “surge” or not.

Radical Shiite leader Moktada al-Sadr also helped by issuing a unilateral cease-fire, reportedly at the urging of his patrons in Iran who were interested in cooling down regional tensions and speeding up the U.S. withdrawal. By 2008, another factor in the declining violence was the growing awareness among Iraqis that the U.S. military’s occupation indeed was coming to an end. Prime Minister Nouri al-Maliki insisted on and got a firm timetable for American withdrawal from Bush.

Even author Bob Woodward, who had published best-sellers that fawned over Bush’s early war judgments, concluded that the “surge” was only one factor and possibly not even a major one in the declining violence.

Woodward, whose book drew heavily from Pentagon insiders, listed the Sunni rejection of al-Qaeda extremists in Anbar province and the surprise decision of al-Sadr to order a cease-fire as two important factors. A third factor, which Woodward argued may have been the most significant, was the use of new highly classified U.S. intelligence tactics that allowed for rapid targeting and killing of insurgent leaders.

However, in Washington, where the neocons remain very influential and where no one wants to be viewed as not giving credit to “the troops” the myth grew that Bush’s “surge” had brought the violence under control. Gen. David Petraeus, who took command of Iraq after Bush yanked Casey and Abizaid, was elevated into hero status as the military genius who achieved “victory at last” in Iraq (as Newsweek declared).

Oddly, the inconvenient reality that the United States was unceremoniously ushered out of Iraq in 2011 has not dented this cherished conventional wisdom about the “successful surge.” To the degree the forced withdrawal is noted at all, it is in neocon op-eds accusing Obama of turning a hard-earned victory into a self-inflicted defeat.

This point about whether the Iraq “surge” should be viewed historically as a failure is not simply an academic matter, nor is it strictly a human tragedy for all the young lives destroyed and the families devastated. The “surge” myth continues to shape policy.

It was Official Washington’s certitude about the “successful surge” in Iraq and the supposed brilliance of Gen. Petraeus that framed the debate in 2009 about the struggling Afghan War, with Obama bowing to advice from Bush’s holdover Defense Secretary Robert Gates, as well as Petraeus, that a similarly sized “surge” was needed in Afghanistan.

Despite resistance from Vice President Joe Biden (who favored a more targeted counter-terrorism approach) and despite Obama’s insistence on an exit strategy (which Gates and the commanders slow-rolled), the Afghan War hawks got pretty much what they wanted in terms of troops and resources for a stepped-up counterinsurgency war.

Now, three years later, as U.S. fatalities in Afghanistan approach 2,000, it is a painful fact that about two-thirds of those killed have died since Obama’s “surges” began. The decade-long war and the troop frustrations from multiple deployments also have contributed to atrocities against Afghans, including the recent massacre of nine children and seven other civilians by an allegedly deranged Army sergeant.

The arc of the Afghan War appears, too, to be following the course of the Iraq War, as Obama and his current Defense Secretary Leon Panetta accelerate timetables for a U.S. drawdown through 2012 and 2013 with the U.S. combat role supposedly coming to an end, assuming Obama wins a second term.

Republican frontrunner Mitt Romney has largely handed over his foreign policy to neocon war hawks who have indicated they might reverse the de-escalation. However, except for the possibility that a President Romney (or some other Republican) might hand the neocons another blank check for an expanded war, the conflict in Afghanistan looks to be on a bumpy glide path to another U.S. military defeat.

And, to the degree that neocons do recognize the outcome of the two wars as mostly disasters, the blame will be placed on Obama, who will be said to have not only betrayed Bush’s “successful surge” in Iraq but failed to pull off his own in Afghanistan.

Petraeus, now director of the CIA, will remain an icon of Official Washington, held in esteem much the way that Gen. Colin Powell was until his deceptive Iraq War speech to the United Nations in 2003 was revealed to be a pack of lies. Retired Defense Secretary Gates, another hero of Bush’s Iraq “surge,” surely will retain his status as a modern-day Washington “wise man.”

Both Petraeus and Gates will undoubtedly be consulted by future presidents, whether Republican or Democratic. And, the pundits whether on MSNBC or Fox News will stick with their beloved “group think” regarding the “successful surge” in Iraq, ignoring the wasted lives, the squandered treasure and the outcome.