U.S. officials are expressing outrage and regret over the slaughter of 16 Afghan civilians, including nine children, allegedly by a deranged U.S. staff sergeant. But the terrible rampage was not an isolated atrocity in the decade-long war in Afghanistan, as Nat Parry notes.

In reaction to the latest atrocity of the U.S. war in Afghanistan the methodical murder of 16 Afghan civilians over the weekend  Secretary of State Hillary Clinton asserted that “this is not who we are, and the United States is committed to seeing those responsible held accountable.”

President Barack Obama added in a statement, “This incident is tragic and shocking, and does not represent the exceptional character of our military and the respect that the United States has for the people of Afghanistan,”  Speaking at the White House on Tuesday, Obama called the incident “heartbreaking” and said it does not reflect American values or represent the U.S. military. 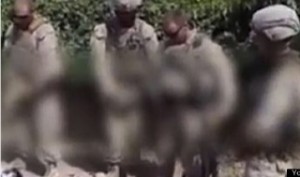 U.S. Marines urinating on the bodies of dead Taliban.

It is a now familiar refrain, a slight variation on previous U.S. apologies, such as those issued over the January incident in which U.S. Marines were captured on video urinating on the corpses of suspected Taliban fighters.

In response to that episode, Clinton said that the “deplorable behavior” of the Marines “is absolutely inconsistent with American values.” A Pentagon spokesman further emphasized that “the actions portrayed are not consistent with our core values and are not indicative of the character of the Marines in our Corps.”

So what are the core values that these officials keep alluding to? President Obama explained these values, fittingly, during his 2009 speech in which he announced the surge of 30,000 additional troops he was sending to Afghanistan. To prevail in the war against the Taliban and al-Qaeda, he said:

“We must draw on the strength of our values for the challenges that we face may have changed, but the things that we believe in must not. That is why we must promote our values by living them at home which is why I have prohibited torture and will close the prison at Guantanamo Bay.

“And we must make it clear to every man, woman and child around the world who lives under the dark cloud of tyranny that America will speak out on behalf of their human rights, and tend to the light of freedom, and justice, and opportunity, and respect for the dignity of all peoples. That is who we are. That is the moral source of America’s authority.”

Since that time, faced with strong opposition in Congress to closing Guantanamo, President Obama has kept the prison open. The U.S. also has failed to speak out strongly on behalf of the human rights of those living under tyranny in countries allied with Washington, such as Bahrain and Uzbekistan. Indeed, the U.S. government continues supplying weapons to those unsavory regimes.

Intense international criticism also has been directed at the Obama administration for its treatment of alleged whistleblower Pvt. Bradley Manning, treatment which some say has amounted to torture.

The U.S. has also expanded the scope of its wars in the Middle East and Central Asia through the use of unmanned aerial drones, which have been strongly criticized by the international community as undermining the prohibition on the use of force in the UN Charter.

And, over the past few days, even as the U.S. has scrambled to explain and apologize for the weekend massacre of 16 Afghans, U.S. drone strikes have killed at least 64 people in Yemen, an operation that has drawn scant press attention.

Ironically, as Clinton and Obama were proclaiming America’s “core values” of human rights in an effort at damage control following the massacre in Afghanistan, the UN Special Rapporteur on Torture Juan Mendez was slamming the United States for its mistreatment of Manning, which he noted violated international law, including the International Covenant on Civil and Political Rights and the Convention against Torture.

As Mendez told the Guardian newspaper: “I conclude that the 11 months under conditions of solitary confinement (regardless of the name given to his regime by the prison authorities) constitutes at a minimum cruel, inhuman and degrading treatment in violation of article 16 of the convention against torture. If the effects in regards to pain and suffering inflicted on Manning were more severe, they could constitute torture.”

Following a 14-month investigation of Manning’s treatment, Mendez noted in a formal report issued on Feb. 29:

“According to the information received, Mr. Manning was held in solitary confinement for twenty-three hours a day following his arrest in May 2010 in Iraq, and continuing through his transfer to the brig at Marine Corps Base Quantico.  His solitary confinement  lasting about eleven months  was terminated upon his transfer from Quantico to the Joint Regional Correctional Facility at Fort Leavenworth on 20 April 2011.

“In his report, the Special Rapporteur stressed that ‘solitary confinement is a harsh measure which may cause serious psychological and physiological adverse effects on individuals regardless of their specific conditions.’ Moreover, ‘[d]epending on the specific reason for its application, conditions, length, effects and other circumstances, solitary confinement can amount to a breach of article 7 of the International Covenant on Civil and Political Rights, and to an act defined in article 1 or article 16 of the Convention against Torture.’”

Manning, a 24-year-old Iraq veteran, was arrested on May 29, 2010, outside Baghdad, where he was working as an intelligence analyst. The U.S. military has been charged him with 22 counts, including aiding the enemy, relating to the leaking a massive trove of state secrets to the whistleblowing website WikiLeaks.

The secrets that Manning is alleged to have shared with WikiLeaks include powerful evidence of U.S. war crimes, including the “Collateral Murder” video documenting the callous killing of over a dozen people in the Iraqi suburb of New Baghdad in 2007 including two Reuters news staff. To date, Manning is the only individual who has been arrested in relation to that tragic incident for the alleged crime of exposing it.

Other secrets allegedly leaked by Manning include “the Afghan War Logs,” a huge cache of secret U.S. military files providing a devastating portrayal of the deteriorating war in Afghanistan. The war logs, made public in July 2010, revealed how coalition forces have killed hundreds of civilians in unreported incidents and how a secret “black” unit of special forces has hunted down suspected Taliban leaders for “kill or capture” without trial.

As the Guardian reported, “The logs detail, in sometimes harrowing vignettes, the toll on civilians exacted by coalition forces: events termed “blue on white” in military jargon. The logs reveal 144 such incidents.

“Some of these casualties come from the controversial air strikes that have led to Afghan government protests, but a large number of previously unknown incidents also appear to be the result of troops shooting unarmed drivers or motorcyclists out of a determination to protect themselves from suicide bombers.

“At least 195 civilians are admitted to have been killed and 174 wounded in total, but this is likely to be an underestimate as many disputed incidents are omitted from the daily snapshots reported by troops on the ground and then collated, sometimes erratically, by military intelligence analysts.”

Since the release of the Afghan War Logs, evidence has continued to surface regarding atrocities being committed with chilling regularity in Afghanistan, including the activities of the 5th Stryker Brigade’s “kill team,” which made headlines last year with the publication of grisly war photos by Rolling Stone.

The kill team had staged three separate murders of Afghan civilians in Kandahar province and had attacked a whistleblowing private who had alerted military police of the kill team’s activities. The investigation into those responsible for the kill team’s crimes led to “a letter of admonition” of Col. Harry D. Tunnell IV, the commander in charge of the 5th Stryker Brigade.

A secret U.S. Army report revealed by Der Spiegel last year confirmed that at least part of the blame for the culture of permissibility that enabled the kill team’s activities fell on Tunnell. As Der Spiegel reported:

“The report suggests that Tunnell helped to create, at least in part, conditions that made the cruel actions of the kill team soldiers possible. ‘Tunnell’s inattentiveness to administrative matters may have helped create an environment in which misconduct could occur,’ the report reads.

“The US Army spent one month investigating the circumstances surrounding the kill team incidents. The report was compiled by General Stephen Twitty, who interviewed 80 Army personnel of various ranks. The 532-page report paints a damning picture of the military culture in the Stryker Brigade Combat Team (SBCT), which was under Tunnell’s command and which the ‘kill team’ soldiers belonged to.”

According to one witness quoted in the Army’s report, Tunnell himself had spoken about “small kill teams,” which he wanted to ruthlessly hunt down the Taliban. He outlined his preferred “counterguerrilla” strategy in speeches to soldiers under his command, which amounted to “search and destroy” missions to ferret out Taliban fighters.

One soldier quoted in the report summed it up by saying: “If I were to paraphrase the speech and my impressions about the speech in a single sentence, the phrase would be: ‘Let’s kill those motherfuckers.’”

While Tunnell got off with a reprimand, the soldier who led the kill team was convicted of premeditated murder and sentenced to life in prison, eligible for parole in nine years.

The 38-year-old Army staff sergeant who allegedly murdered 16 Afghan civilians over the weekend including nine children and three women may face the death penalty, according to Defense Secretary Leon Panetta.

If executing the soldier is intended to demonstrate America’s core values, however, the U.S. may want to reconsider this approach. The United States’ infatuation with the death penalty has long been a source of alienation with U.S. allies, particularly in Europe. Following last year’s controversial execution of Troy Davis, for example, European allies expressed shock and dismay.

EU foreign policy chief Catherine Ashton said, “The EU opposes the use of capital punishment in all circumstances and calls for a universal moratorium. The abolition of that penalty is essential to protect human dignity.”

Rather than responding to the weekend’s war crimes in Afghanistan with even more bloodlust, the United States might do well to consider a new strategy, perhaps starting by ending its wars and prosecuting all war crimes in Iraq and Afghanistan all the way up the chain of command.

Releasing alleged whistleblower Bradley Manning from prison and compensating him for his months of “cruel, inhuman and degrading treatment” would also be a welcome step toward demonstrating America’s commitment to its “core values.”

Nat Parry is the co-author of Neck Deep: The Disastrous Presidency of George W. Bush. [This story appeared previously at http://compliancecampaign.wordpress.com/]

← Reclaiming the Commons
Losing Faith in a Democratic Israel →