When financier Robert Allen Stanford was a high-flying billionaire, he spread his campaign donations around to powerful politicians of both parties, from Barack Obama to John McCain. But now with Stanford convicted of fraud a federal court is demanding refunds of his largesse, reports Michael Winship.

On Tuesday, Texas financier Robert Allen Stanford was convicted in a Houston federal court on 13 out of 14 criminal counts of fraud. As The New York Times reported:

“The jury decision followed a six-week trial and came three years after Mr. Stanford was accused of defrauding nearly 30,000 investors in 113 countries in a Ponzi scheme involving $7 billion in fraudulent high-interest certificates of deposit at the Stanford International Bank, which was based on the Caribbean island of Antigua.” 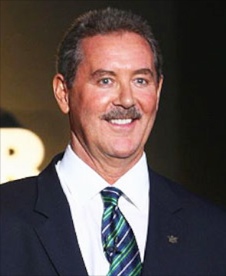 Media accounts of Stanford’s conviction were filled with stories of his excesses, mansions, private yachts and jets, and so much money invested in Antigua, including bribes, the small island awarded him a knighthood.

Among his other indulgences, noted the Reuters news service: “He bought a castle in Florida for one of his girlfriends and his oldest daughter lived in a million-dollar condominium in Houston. He wore custom-made suits and bankrolled a $20 million prize for an international cricket tournament.”

But what most of this week’s stories failed to mention was the large amount of his clients’ cash that was spent on campaign contributions, greasing the corrupt nexus of money and politics for personal gain. Hundreds of thousands of dollars were given to candidates, including Barack Obama, John McCain, John Boehner and Harry Reid; as well as national fundraising committees for the Republican and Democratic parties.

The court-appointed receiver charged with returning money to Stanford’s investors is trying to get the contributions back. And the committees are resisting.

“And when Tom DeLay was still House Majority Leader, he flew the friendly skies in Stanford’s private jet 16 times in three years, including a trip to Houston for DeLay’s arraignment on money-laundering charges. I am not making this up!

“Sir Allen also showered millions of dollars on political campaigns; much of it in the very year Congress was debating a bill to curb financial fraud. Two of the biggest recipients were Democratic Senator Bill Nelson and Republican John McCain, one of the original Keating Five. Three key Democrats on the Senate Banking Committee got checks from Stanford, too. Surprise, surprise  the reform bill never got out of the Senate.”

The non-partisan Center for Responsive Politics elaborated on its Open Secrets blog:

“Between its PAC and its employees, Stanford Financial Group has given $2.4 million to federal candidates (including both candidate committees and leadership PACs), parties and committees since 2000, with 65 percent of that going to Democrats. Stanford and his wife, Susan, have given $931,100 out of their own pockets, with 78 percent going to Democrats

“The company gave the most during the 2002 election cycle, when Congress was debating the Financial Services Antifraud Network Act, a bill that would have created a computer network linking the databases of state and federal banking, securities and insurance regulators to curb financial fraud. Lobbying reports indicate that Stanford Financial Group lobbied on the bill, which the House passed but the Senate did not.”

On Feb. 13, Murray Waas of Reuters reported, “The court-appointed receiver charged with returning money to Stanford investors obtained a federal court order last June against five Democratic and Republican campaigns. But they haven’t returned the money.

House Speaker Boehner, Senate Majority Leader Reid, Sen. McCain and some others already have returned their contributions, but Waas writes, “the roughly $154,000 recovered from elected officials is a fraction of the $1.8 million missing.”

Others, including President Obama, turned money over to charity, $4,600 in Obama’s case, received directly from Allen Stanford in 2008. Nonetheless, the receivership has asked the Obama campaign to turn the same amount back to investors, and Waas adds:

“The total may be as high [as] $31,000 when Stanford’s contributions to Obama’s other campaign committees are included, along with money from senior Stanford executives, and the Stanford Financial Group’s now-defunct PAC, according to campaign finance records and an analysis by the Center for Responsive Politics.”

Kevin Sadler, lead counsel for the receivership, told Reuters, “The money was never theirs to begin with,” and that taking Stanford’s campaign contributions was akin to someone being given cash by “a guy who goes into a Seven Eleven and robs the store.”

The national campaign committees are appealing to a higher court a federal judge’s order to return Stanford’s donations.

We spoke with Kevin Sadler, who said that in the meantime, a federal district judge has just ordered the committees to pay the receivership $370,000 in legal fees, with another $120,000 in fees to come if their appeal is unsuccessful, and yet another $275,000 if the committees take the case to the Supreme Court and lose.

“In light of this,” Sadler told us, “and the Stanford guilty verdict, it is a puzzling act of bi-partisanship that all the political committee defendants persist in their fight against the receiver.”

← Will Netanyahu Defy Obama on Iran?
America Gets Stupid, Again, on Iran →