The retirement of Sen. Olympia Snowe and the death of right-wing smear-master Andrew Breitbart are removing two figures who stood on opposite sides of the chasm dividing the old world of collegial collaboration between politicians and the new one of nasty destruction of political opponents, as Danny Schechter observes.

There was an eerie synchronicity between the pending retirement of veteran Maine Sen. Olympia Snowe, a Republican who had more than she could take of hyper-partisan “conservative” correct-lineism in Congress, and the death of Andrew Breitbart, the right-wing provocateur who did his very best to create the dynamic that Snowe was rejecting.

She would never use the language of her Party-mate Rick Santorum who confessed that some policies he disagreed with made him want to throw up, but if we lived in the age when all roads led to Rome. Congress would surely have its own vomitorium in the basement and it would be well attended. 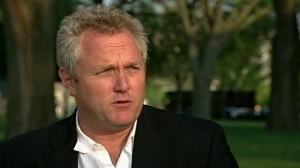 Breitbart’s unexpected passing of “natural causes” at age 43 might foreshadow the end of his political brand just as Snowe’s retreat to the state that lobsters made famous may mark the end of the center in the GOP. (Or there may be another Breitbart who quickly fills the job opening that his death created.)

Breitbart’s activism raised the art form of smearing and bullying political opponents with the full support of the extremist echo chamber that helped him build his career. There was no tactic that was too unethical in his aggressive arsenal that relished embarrassing and exposing enemies with videos and bombast.

After he died, the likes of Matt Drudge and Michelle Mallkin were there with teary condolences as was his adoring staff members who posted this testimonial: “Andrew lived boldly, so that we more timid souls would dare to live freely and fully, and fight for the fragile liberty he showed us how to love.”

What he did love was to re-tweet every criticism he received as badges of honor in his what-seemed-like endless self-promoting crusade.

Conservative Ron Deher wrote, “I couldn’t stand some of what Breitbart did, and criticized certain of his stunts on this blog. But Lord have mercy, a 43 year old man dropped dead and left a widow and four fatherless children. He was a provocateur, not a criminal. The thing Breitbart suffered from is the same thing too many of us suffer from: making ideology more important than basic human decency.”

David Frum, the man who coined the phrase “axis of evil,” was honest enough to admit that “to speak only ‘good’ of Andrew Breitbart would be to miss the story and indeed to misunderstand the man. The good was there. Breitbart was by all accounts generous with time and advice, a loving husband and father, and a loyal friend.

“One of those friends, Arianna Huffington, wrote today: ‘All I can think is what Andrew meant to me as a friend his passion, his exuberance, his fearlessness.’ Breitbart was unquestionably passionate and was exuberant. If by ‘fearless’ you mean perpetually eager for confrontation, then yes he was fearless too, although in a very particular way. Nobody would ever describe Andrew Breitbart as a man of ‘quiet courage.’ He delighted in the enraged outburst, the shouted insult, the videotaped jab of a finger into an opponent’s chest.

“Yet,” Frum continued, “it’s difficult for me to assess Breitbart’s impact upon American media and American politics as anything other than poisonous. When one of the leading media figures of the day achieves his success by giddy disdain for truth and fairness how to withhold a profoundly negative judgment of his life and career? Especially when that career was so representative of his times?”

It was the political “culture war,” which Breitbart advanced in his own take-no-prisoners way, that offended a cultured senator like Olympia Snowe who said she was through with the spirit of confrontation and polarization that drives modern politics. She was fed up with an environment that had no room for individual conscience or measured dissent.

Politico‘s Jonathan Allen wrote in an article entitled “The center crumbles” that “Congress can’t find the middle ground because no one’s willing and able to stand there anymore. …

“For some like Snowe, the question is, why bother? The prospect of running hard to win another term, particularly a six-year Senate term, is less and less attractive for folks who came to Washington to make things happen only to find out there’s no common ground to get things done, only partisan point-scoring that leads to paralyzed politics.”

Some years ago when I was making the film “In Debt We Trust,” I spent a long night in Congress waiting to interview Texas Congresswoman Sheila Jackson Lee who was then speaking on the floor against Republican demands that the United States seal both our Southern and Northern borders with a fence or an East Berlin-like high wall to stop illegal immigrants.

She very calmly challenged the idea with facts and figures that seemed very rational and to the point. But when the vote came, all of the Republicans were looking down at their blackberries where they were being instructed on how to vote by their leadership. Despite some agreement in the debate with some of her points, the GOP voted as a bloc, no deviations!

That was before the Tea Party fanatics moved in and started rejecting the advice of their whips because the leadership’s position was not partisan and obstructionist enough. That relentless partisanship represented Breitbart’s ideas in action.

After his death, the Los Angeles Times recognized his skill for turning media manipulation into an art: “Breitbart was a revolutionary eager to overthrow a media establishment that he viewed as a front for left-wing social causes. Always brimming with righteous indignation, before he died, his final tweet offered an explanation for why he’d called an adversary a ‘putz’, he had contempt for anything that smacked of liberal do-gooderism or hypocrisy.”

In his last known conversation in an L.A. bar, he blamed liberals for forcing the GOP to debate social issues so they could challenge them. To him, like generations of anti-communists before him, there was always a liberal (his version of communist) under every bed.

Writer Patrick Goldstein noted, “Breitbart would’ve been a marginal figure if he had simply been a media gadfly. His genius was rooted in the realization that in the new media universe, being outrageous often gets far more attention than being authoritative. After Ted Kennedy died in 2009, when everyone else was lionizing the great liberal crusader, Breitbart ripped him as a ‘duplicitous bastard.’ He also called him a ‘prick’ and ‘a special pile of human excrement.’”

Personally, Breitbart went from a liberal family to join a reactionary community, but his career also was advanced by attention he got from liberals. He helped found Huffington Post and benefited from appearances on Bill Maher’s shows. Fox News also contributed to his national celebrity, even as he co-wrote a book criticizing the celebrity culture that propelled him into national visibility.

Many on the Left lacked his media sophistication and were unprepared to respond to his attacks. Organizations like ACORN, known for grassroots organizing and voter registration, were destroyed by Breitbart’s calculated shock tactics, partly because his undercover gang with video cameras understood its vulnerabilities and played on its naivetÃ©. Rather than defending them, many Democrats rushed to distance themselves and in the process defunded an important organizing force.

He was less effective in his campaign against Occupy Wall Street, but what he lacked in invective local police forces more than made up for with spying, surveillance and physical attacks. He was a cheerleader for this repressive response.

He did seem to have some loose screws. According to Wikipedia, “At the Conservative Political Action Conference convention in Washington, D.C., on February 10, 2012, a belligerent Breitbart was captured walking with a glass of wine, screaming a diatribe at protesters, including repeatedly calling them ‘filthy freaks’ and ‘murderers,’ demanding that they ‘stop raping the people.’ He was restrained by convention hotel security, resisting as they physically pushed him away from the demonstration.”

He wanted his enemies to hate him, and, no surprise, many reciprocated in kind. Wikipedia also noted, “Breitbart often appeared as a speaker at Tea Party movement events across the U.S. For example, Breitbart was a keynote speaker at the first National Tea Party Convention at Gaylord Opryland Hotel in Nashville on February 6, 2010.”

What’s the lesson for the Left from Breitbart’s life and work? No one would suggest emulating his deliberately deceptive methods but perhaps, his example argues that the activists he sought to destroy need more audacity, more discipline and more cleverness in exposing right-wing media with better alliances and collaborations. They need to create mutually supportive echo chambers that go on the offense as opposed to just reacting to attack. They also need to try to seize the national stage, not shrink from it for fear of being co-opted.

Olympia Snowe deserves our respect for taking the stand she did against hyper-partisanship. Andrew Breitbart may have died young at age 43 a tragedy for his family and friends but who, besides acolytes and his own (often hate-filled) ditto heads, will really honor his legacy?

News Dissector Danny Schechter blogs at News Dissector.net. His latest book is Occupy: Dissecting Occupy Wall Street. His focus has been on exposing Wall Street Crimes in films like Plunder and In Debt We Trust. He hosts a show on Progressive Radio Network (PRN.fm) Comments to dissector@mediachannel.org

6 comments for “The Chasm of Political Ugliness”