Major U.S. news outlets spin any event regarding Iran’s nuclear program in the most negative way, now hyping a dispute about conditions for visiting a military site as supposed proof that Iran has something to hide. But Gareth Porter points out that the media is missing key nuances.

News media reported last week that Iran had flatly refused the International Atomic Energy Agency (IAEA) access to its Parchin military test facility, based on a statement to reporters by IAEA Deputy Director General, Herman Nackaerts, that “We could not get access.”

Now, however, explicit statements on the issue by the Iranian Ambassador to the IAEA and the language of the new IAEA report indicate that Iran did not reject an IAEA visit to the base per se but was only refusing access as long as no agreement had been reached with the IAEA governing the modalities of cooperation. 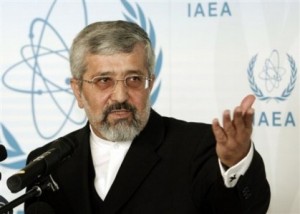 That new and clarifying information confirms what I reported Feb. 23. Based on the history of Iranian negotiations with the IAEA and its agreement to allow two separate IAEA visits to Parchin in 2005, the Parchin access issue is a bargaining chip that Iran is using to get the IAEA to moderate its demands on Iran in forging an agreement on how to resolve the years-long IAEA investigation into the “Possible Military Dimensions” of the Iranian nuclear program.

In an email to me and in interviews with Russia Today, Reuters, and the Fars News Agency, the Iranian Permanent Representative to the IAEA, Ali Asghar Soltanieh, said Iran told the high-level IAEA mission that it would allow access to Parchin once modalities of Iran-IAEA cooperation had been agreed on.

“We declared that, upon finalization of the modality, we will give access [to Parchin],” Soltanieh wrote in an email to me.

In the Russia Today interview on Feb. 27, reported by Israel’s Haaretz and The Hindu in India but not by western news media, Soltanieh referred to two IAEA inspection visits to Parchin in January and November 2005 and said Iran needs to have “assurances” that it would not “repeat the same bitter experience, when they just come and ask for the access.”

There should be a “modality” and a “frame of reference, of what exactly they are looking for, they have to provide the documents and exactly where they want [to go],” he said.

But Soltanieh also indicated that such an inspection visit is conditional on agreement about the broader framework for cooperation on clearing up suspicions of a past nuclear weapons program. “[I]n principle we have already accepted that when this text is concluded we will take these steps,” Soltanieh said.

The actual text of the IAEA report, dated Feb. 24, provides crucial information about the Iranian position in the talks that is consistent with what Soltanieh is saying. In its account of the first round of talks in late January on what the IAEA is calling a “structured approach to the clarification of all outstanding issues,” the report states:

On the Feb. 20-21 meetings, the agency said that Iran “stated that it was still not able to grant access to that site.” There was likely a more complex negotiating situation behind the lack of agreement on a Parchin visit than had been suggested by Nackaerts and reported in western news media.

But not a single major news media report has reported the significant difference between initial media coverage on the Parchin access issue and the information now available from the initial IAEA report and Soltanieh. None have reported the language of the report indicating that Iran’s refusal to approve a Parchin visit in January was qualified by “at that time”.

Only AFP and Reuters quoted Soltanieh at all. Reuters, which actually interviewed Soltanieh, quoted him saying, “It was assumed that after we agreed on the modality, then access would be given.” But that quote only appears in the very last sentence of the article, several paragraphs after the reiteration of the charge that Iran “refused to grant [the IAEA] access” to Parchin.

The day after that story was published, Reuters ran another story focusing on the IAEA report without referring either to its language on Parchin or to Soltanieh’s clarification.

The Los Angeles Times ignored the new information and simply repeated the charge that Iran “refused to allow IAEA inspectors to visit Parchin military base.” Then it added its own broad interpretation that Iran “has refused to answer key questions about its nuclear development program.” Iran’s repeated assertions that the documents used to pose questions to it are fabricated were thus dismissed as non-qualified answers.

The Parchin access story entered a new phase today with a Reuters story quoting Deputy Director General Nackaerts in a briefing for diplomats that there “may be some ongoing activities at Parchin which add urgency to why we want to go.” Nackaerts attributed that idea to an unnamed “Member State,” which is apparently suggesting that the site in question is being “cleaned up.”

The identity of that “Member State,” which the IAEA continues to go out of its way to conceal, is important, because if it is Israel, it reflects an obvious interest in convincing the world that Iran is working on nuclear weapons.

As former IAEA Director-General Mohamed ElBaradei recounts on p. 291 of his memoirs, “In the late summer of 2009, the Israelis provided the IAEA with documents of their own, purportedly showing that Iran had continued with nuclear weapon studies until at least 2007.”

The news media should be including cautionary language any time information from an unnamed “Member State” is cited as the source for allegations about covert Iranian nuclear weapons work. It could very likely be coming from a State with a political agenda. But the unwritten guidelines for news media coverage of the IAEA and Iran, as we have seen in recent days, are obviously very different.