A new poll shows that Israelis have a more skeptical view toward bombing Iran than some of their leaders, not to mention the neocon war hawks in the United States, a finding that ex-CIA analyst Paul R. Pillar says should bolster President Obama’s resistance to an Israeli strike.

Shibley Telhami of the University of Maryland, in cooperation with the Dahaf Institute of Israel, has just released the results of a poll taken within the past week of Israeli opinion toward Iran and American politics. Israeli attitudes toward the efficacy of a military strike against the Iranian nuclear program parallel the range of views one hears on that subject in the United States.

If there is any surprise, it is that Israeli views are not any more hawkish than they are, notwithstanding the war rhetoric that the Netanyahu government has been disseminating for many months. (Anyone who doubts the ability of government drum beating to build public support for a war should recall the enormous effect on American public opinion of the George W. Bush administration’s drumbeat on Iraq.) 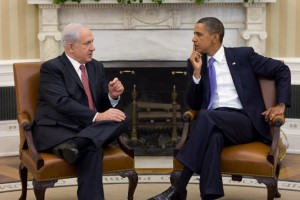 On the key question of whether Israel should launch such a strike notwithstanding the fact that the United States and powers advise against it, only 19 percent of Israelis favor a strike even in the face of U.S. opposition. Thirty-four percent oppose a strike no matter what. A plurality, 42 percent, would back a strike only if it had at least the support of the United States.

That last result should form the basis for President Barack Obama’s main talking point when he meets with Prime Minister Netanyahu next week. The president should make it clear that if the Israeli government launches a war, it will not have U.S. support. This would mean that such an act of strategic foolhardiness would also be an act of political foolhardiness for Netanyahu, given that it would fly in the face of the views of the large majority of Israelis.

This advice admittedly runs against the customary way of looking at relations between Israel and the United States, in which we seem to have become resigned to the former country playing the politics of the latter country like a violin. But the superpower patron, not just the generously supported client, ought to be able to play too.

In this regard, Telhami’s poll offers some additional support for President Obama. Asked whom they would like to win this year’s U.S. presidential election, Israelis split evenly in a race between Obama and Romney, and they clearly prefer Obama in match-ups against each of the other candidates still in the Republican primary race. (The strongest preference for Obama is over Rick Santorum, the candidate who has sounded most bellicose about Iran.)

Whatever effect the Republican candidates’ striving to outdo the president as lovers of Israel may be having on the hard-core Republican base in the United States, it doesn’t seem to be winning over a lot of Israelis.

When President Obama addresses AIPAC next week, he should, and undoubtedly will, express continued strong U.S. support for the security of Israel. He also should, but probably will not, discuss the consequences of a possible military strike on Iran in terms that mirror Israeli views as measured in this week’s poll.

He should talk about how the most that could be accomplished by a strike is a short-term delay in Iranian activities and that a strike would set the stage for unending military conflict with the Iranians. He should also talk about how the political effect in Iran would be at least as likely to strengthen the loathed regime in Tehran as to weaken it.

Of course, if the president were to speak in such terms he would be met with a chorus of denunciation by American critics who already have been arguing that the military option should be talked up, not down, and that saber rattling is the best way to get Iranian attention and Iranian concessions. But political and psychological imperatives mean that the response of Supreme Leader Khamenei or other Iranian leaders to saber rattling is more likely to be to dig in their heels and be more conscious than ever of the need not to show weakness.

Amitai Etzioni’s recent contribution in these spaces is quite correct that negotiation represents the only way out of this dangerous impasse, and that the open promotion of regime change in Tehran only reduces the chance of negotiating anything with the Iranians. But he is wrong that threatening a war is the way to promote negotiations.

The idea that the U.S. invasion of Iraq in 2003 was some sort of enticement to negotiate is no more valid with Iran than it was, as some have argued, with Libya. (Qaddafi’s decisions to get out of terrorism, to end his weapons-development programs and to negotiate a new relationship with the United States came several years earlier.)

The high point in Iranian cooperation with the United States came in late 2001 and early in 2002, before the Bush administration slammed the door in the Iranians’ face and declared the Axis of Evil. The 2003 invasion was a reminder of Washington’s dedication to regime change, not to negotiation.

Negotiation is indeed the way out of possible disaster, and the way to negotiation, even with the most difficult and obstreperous regimes, is through patient engagement. The most recent development in dealing with the North Korean nuclear program demonstrates that truth once again.