Neoconservative Joe Lieberman is leading a group of nearly one-third of the U.S. Senate in demanding that President Obama stop Iran from achieving even a nuclear weapon “capability.” But ex-CIA analyst Paul R. Pillar says such loose rhetoric can put the country on a dangerous course toward war.

Delineating the nation’s interests starts with the basics: the security and well-being of our citizens in our own homeland. Life, liberty and the pursuit of happiness, those sorts of things. There is no controversy about this, and the nation would and should spare no costs or risks to uphold these core interests.

National interests go far beyond the core to include as well many other things overseas. But few of those other things are so vital that they would be worth incurring every conceivable cost or risk to bring them about. Some things that are not in U.S. interests the United States may need to live with, because there is no way to avoid them short of measures that would damage U.S. interests even more. 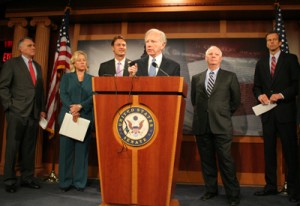 Sen. Joe Lieberman, with other senators, speaking about sanctions on Iran

Congress, as representative of the American people, has a proper and important role in declaring what is or is not in the interests of the United States. But if such declarations are not to be a useless and potentially endless laundry list of nice-to-haves, members of Congress need to do a couple of other things.

They need to explain why something is in U.S. interests, preferably by relating it to the core life-and-liberty stuff. And they need to stipulate to what lengths, and at what costs and risks, the United States should go to pursue the objective in question.

A sense-of-the Senate resolution on Iran that Sens. Lindsey Graham, R-South Carolina, and Joe Lieberman, I-Connecticut, along with numerous cosponsors, introduced last week does neither of those things. The key operative language in the resolution “affirms that it is a vital national interest of the United States to prevent the Government of the Islamic Republic of Iran from acquiring a nuclear weapons capability” and “rejects any United States policy that would rely on efforts to contain a nuclear weapons-capable Iran,” further calling on the president to “oppose any policy that would rely on containment as an option in response to the Iranian nuclear threat.”

The resolution’s preambulary language, with 19 “whereas” clauses, runs through a familiar litany of things people don’t like about Iran, from the Iranian president’s anti-Israeli rhetoric to weird alleged plots to assassinate ambassadors in Washington. But nothing in the resolution identifies how or why containment of a nuclear-weapons-capable Iran would be different from the status quo in any way that would damage a “vital national interest” of the United States.

It would be easy to imagine a similar resolution about the Soviet Union when it was about to get its first nuclear weapon in the late 1940s. There certainly would be plenty of good material for the preambulary clauses. “Whereas the USSR is ruled by a bloodthirsty dictator who has killed millions and enslaved many more, has used force to subjugate half of Europe,” etc. the Senate “opposes any policy that would rely on containment as an option in response to the Soviet nuclear threat.” George Kennan, rest in peace.

The new resolution, despite ostensibly aiming for an agreement with Iran, would damage the prospects for negotiating any such agreement. The resolution calls for terms that are understandably nonstarters for Iran.

In referring to “the full and sustained suspension of all uranium enrichment-related and reprocessing activities,” the resolution appears to rule out an Iranian enrichment program under international supervision and inspection, which almost certainly would have to be part of any formula that could gain the agreement of both Iran and the Western powers.

Incredibly, the resolution also calls for “the verified end of Iran’s ballistic missile programs.” This goes beyond any United Nations resolutions on Iran, which talk about nuclear capability of missiles, and even beyond anything ever demanded of Saddam Hussein’s Iraq, for which range limits were imposed. It would be understandable if Tehran reads such language as further evidence that the United States is interested not in any negotiated agreement but instead only in regime change.

By declaring “nuclear weapons capability” rather than acquisition of a nuclear weapon to be unacceptable, the resolution also blurs red lines in a way that may flash green lights to Israel to launch a military attack on Iran.

This resolution also walks the United States farther down a path to launching its own war against Iran. This stems partly from the resolution’s very silence on how far the United States should go to try to prevent an Iranian nuclear weapon, implying that anything goes. It also stems from the usual way in which declarations of national interests or objectives are subsequently exploited.

Such declarations are habitually invoked by those pushing for action, obliterating any distinction between core, defend-at-all-costs interests and other objectives. The exploiters say, “If we agree that this is in our national interest, then why aren’t we doing whatever it takes to attain it?”

← Madison: Father of the Commerce Clause
Taking a Bite Out of Apple →

9 comments for “A Dangerous Resolution”