Iran’s refusal to grant U.N. inspectors access to the Parchin military facility is churning up new suspicions about a concealed nuclear weapons program, but the impasse can be explained as the frustration by Iran over how previous inspections of the site have been treated, Gareth Porter writes for Inter Press Service.

The failure of a mission by the International Atomic Energy Agency (IAEA) to get Iranian permission to visit a military testing site mentioned in its latest report has been interpreted in media coverage as a stall to avoid the discovery of confirming evidence of past work on nuclear weapons.

But the history of Iranian cooperation with the IAEA on carrying out inspections at the Parchin military testing center, as well as a previous IAEA-Iran work program agreement, suggests that Iran is keeping permission for such a visit as bargaining leverage to negotiate a better deal with the agency. 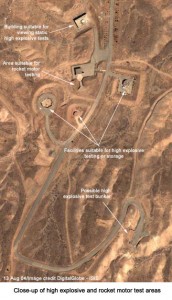 Satellite photo of Parchin military base taken on Aug. 13, 2004, and displayed at the Web site of the Institute for Science and International Security, which has pushed allegations against Iran.

The IAEA statement on Wednesday emphasized the fact that the mission to Tehran had been denied permission to visit the site at Parchin. That prompted Associated Press correspondent in Vienna, George Jahn, to call Iran’s refusal to agree to an IAEA visit to Parchin “stonewalling” and evidence of “hard line resistance” to international pressure on its nuclear program.

But access to Parchin was discussed as part of broader negotiations on what the IAEA statement called a “document facilitating the clarification of unresolved issues” in regard to “possible military dimensions” of Iran’s nuclear program. The negotiations were focused on what cooperation the IAEA is demanding and what the agency is ready to offer in return for that cooperation.

Judging from past negotiations between Iran and the IAEA, Iran is ready to offer access to Parchin as well as other sites requested by the agency as part of an agreement under which the IAEA would stop accusing Iran of carrying out covert nuclear weapons experiments.

The IAEA’s position in the negotiations was revealed by the AP’s Jahn, who reported that the agency mission had hoped to get Iranian agreement to meetings with “scientists suspected of working on the alleged weapons program” and to “inspect documents related to nuclear weapons work.”

An IAEA report from September said the agency had “proposed discussions with Iranian experts on the contents of the engineering reports (on the Shahab-3 missile) examining in detail modeling studies.” Iran has rejected such demands as threatening its legitimate national security interests, in violation of the IAEA statute.

The scientists that the agency is demanding to see are publicly known officials of Iran’s military research institutions. Even before Israel had begun assassinating Iranian scientists, Iran had made it clear it will not give the IAEA physical access to any individual scientists.

The IAEA wants to visit a specific site at Parchin because of information from an unnamed member state, cited in its November 2011 report, that Iran had “constructed a large explosives containment vessel in which to conduct hydrodynamic experiments” tests of nuclear weapons designs without the use of fissile material.

The report said the construction had been carried out at Parchin military complex in 2000 and that the IAEA had satellite imagery that was “consistent with” that information, meaning only that there were structures that could have housed such a vessel at Parchin in 2000. The previous history of IAEA inspections at Parchin make it clear, however, that Iran knew it had nothing to hide at Parchin after 2000.

In 2004, John Bolton, the point man in the George W. Bush administration on Iran, who coordinated closely with Israel, charged that satellite imagery showed a bunker at Parchin appropriate for large-scale explosives tests such as those needed to detonate a bomb that would use a neutron trigger.

Bolton put heavy pressure on the IAEA to carry out an investigation at Parchin. A few months later, Tehran agreed to allow the agency to select any five buildings and their surroundings to investigate freely. That gave U.S. and Israeli intelligence, as well as IAEA experts, an opportunity for which they would not have dreamed of asking: they could scan satellite imagery of the entire Parchin complex for anything that could possibly suggest work on a nuclear weapon, including a containment vessel for hydrodynamic testing, and demand to inspect that building and the grounds around it at their leisure.

In January 2005, an IAEA team visited Parchin and investigated the five areas they had chosen, taking environmental samples, but found nothing suspicious. In November 2005, Iran allowed the IAEA to do the same thing all over again on five more buildings of its own choice.

The Iranian military and nuclear establishment would never have agreed to such terms for IAEA inspection missions at Parchin – not once but twice – if they had been concealing a hydrodynamic test facility at the base.

Other information suggests that no such vessel ever existed at Parchin. Yet, the November report claimed the IAEA had obtained information on the dimensions of the containment vessel from the publication of a foreign expert identified as someone who worked “in the nuclear weapons program of the country of his origin.”

That was a reference to Vlachyslav Danilenko, a Ukrainian scientist who has acknowledged having lectured in Iran on theoretical physics and having helped the country build a cylinder for production of nano-diamonds, which was his research specialty. However, Danilenko has firmly denied ever having done any work related to nuclear weapons.

The claim that the dimensions of the putative bomb test chamber at Parchin could be gleaned from a publication by Danilenko is implausible. The report said the bomb containment chamber at Parchin was “designed to contain the detonation of 70 kilograms of high explosives.” Danilenko’s patented 1992 design for a cylinder for nano-diamond production, however, was built to contain only 10 kg of explosives.

Former IAEA weapons inspector and nuclear weapons expert Robert Kelley has pointed out, moreover, that a container for only 70 kg of explosives could not possibly have been used for hydrodynamic testing of a nuclear weapon design.

The negotiations on a “framework” for Iran’s cooperation with the IAEA recall the negotiation of a “work program” in August 2007 aimed at resolving a series of issues on which the IAEA Safeguards Department suspected links to nuclear weapons. The issues included experiments involving the extraction of polonium-210, plutonium experiments and possible military control of the Gchine uranium mine.

In previous years, Iran had failed to provide sufficient information to overcome those suspicions. But after the negotiation of the “work program,” Iran began to move with dispatch to provide documentation aimed at clearing up the six remaining issues. The IAEA acknowledged that all six of the issues had been effectively resolved in two reports in late 2007 and early 2008.

The reason for the dramatic change in cooperation was simple: the IAEA had pledged that, in return for Iran’s resolving the six issues, “the implementation of safeguards in Iran will be conducted in a routine manner.” That was seen as a significant step toward finally getting a clean bill of health from the agency.

But the IAEA instead then began focusing its questioning entirely on the purported Iranian documents of unknown origin and doubtful authenticity which the IAEA called the “alleged studies.”

11 comments for “Tempest over an Iran Military Site”